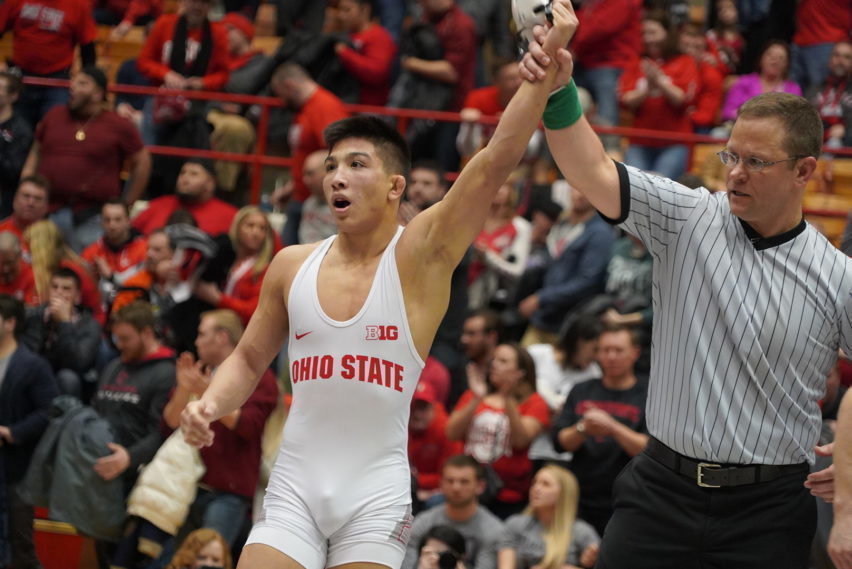 While the perennial powerhouse Buckeye wrestling team fell to the reigning champs, many athletes and teams flourished, including the men’s tennis and men’s golf teams. What follows are brief recaps of the Olympic sports action of the past week with links to the press releases.

The No. 6 Ohio State wrestling team fell to No. 1 Penn State, 28-9, in front of a record crowd of 13,276 at St. John Arena. The crowd represented the largest wrestling crowd in the illustrious history of the renowned arena, nearly doubling the dual record and exceeding the size of the 2015 Big Ten Championships attendance by more than 3,000.

Malik Heinselman, Micah Jordan and Myles Martin were winners in their individual bouts.

Heinselman (20-5) earned his team-high 20th win, recording a takedown in all three periods and surrendering zero offensive points in a 7-4 victory.

To start the tourney, the Buckeyes knocked out Rutgers, 3.5-2.5, and Wisconsin, 3-3 by tiebreaker, to advance to the semifinals.

Then the Buckeyes overcame No. 1-seeded Illinois, 3.5-2.5, to make it to the championship round. The Scarlet and Gray dominated Maryland, 4.5-1.5, to win the tournament.

“We really had high hopes and high expectations coming into this weekend because we felt like all of our guys were playing well,” said head coach Jay Moseley. “It was just a matter of going out and executing our game plan and hitting the shots. The guys played really well all weekend and I couldn’t be more proud of them.”

Seniors Maddy Field and Lauren Boyle put the Buckeyes ahead 2-0 through the first period, but the Beavers bounced back with three unanswered goals to defeat Ohio State.

Alex Kobelt and Hunter Tubert won 6-3 and 6-2, respectively, in singles play. John McNally won his match, while Kyle Seelig fell short in a tough battle. JJ Wolf finished the night by forcing a third set tiebreaker and evoking roars from the crowd with a dominant 10-0 super set.

In a top-25 showdown on Scarlet and Gray soil, the No. 2 Ohio State men’s tennis team dominated from start to finish, taking down No. 24 Georgia, 4-0.

The victory improved the Buckeyes’ record to 8-0 on the season and avenged a 4-0 loss last year to the Bulldogs in Athens, Ga.

The No. 16 Ohio State women’s tennis team lost to No. 4 Duke, 4-3, in heartbreaking fashion in the ITA National Team Indoor Championship Round of 16 in Seattle.

The Buckeyes bounced back with a 5-2 victory against No. 10 Syracuse (4-4) in the consolation round of the ITA National Team Indoor Championship. The Buckeyes improve to 4-2 on the season and will host matches against in-state opponents Cleveland State and Akron on Feb. 20.

Both Ohio State track and field teams traveled to Clemson University to compete in the Tiger Paw Invitational, holding their own among the nation’s elite.

Sade Olatoye won gold in shot put with a 17.12-meter throw, and set a meet record in the weight throw at 23.51 meters. Nick Gray took third in the 200-meter dash at 20.82 seconds, setting a school record.

Abby Nichols competed at the GVSU Big Meet, and ran the 5,000-meter run in 16:14.00, putting her name in the Ohio State record book as the fastest ever.

The Ohio State women’s gymnastics team fell to Maryland at the Xfinity Center in College Park, Md. The Buckeyes (4-2, 3-1 B1G) posted a solid start, recording a 49.150 on the uneven bars and a season-high 49.025 on beam. However, the team was forced to count falls on both floor and beam, and ended the night with an all-around score of 194.250. Maryland (5-2, 2-1) recorded a season-high score of 195.950 to give Ohio State its first conference loss of the season.

The Ohio State men’s volleyball team fell to No. 15 Purdue Fort Wayne in three sets (34-32, 25-17, 25-23). The Mastodons broke a nine-match winning streak for the Buckeyes against their program, overcoming 23 services errors and attacking at a .333 rate. Ohio State struggled with serves as well, committing 17 errors.

The Ohio State men’s volleyball team pushed the defending national champion No.1 Long Beach State in the third set, but ended up dropping the match in three sets (25-19, 25-18, 25-21).

The No. 24 Ohio State softball team swept its opening day of the 2019 season, blanking George Mason, 7-0, and pulling off a 4-2 comeback victory against Ole Miss, at the Friends of Jaclyn Tournament.

Head coach Kelly Kovach Schoenly recorded her 200th win as the leader of the Buckeyes.

After winning its first two games, the No. 24 Ohio State softball team split on day two of the Friends of Jaclyn Tournament.

The Buckeyes (3-1) pitched another shutout, knocking of North Florida, 3-0. Then the Scarlet and Gray dropped a tight ballgame, 3-2, to the University of Central Florida.

“Overall, there were a lot of great takeaways from this week,” Ohio State director of golf and women’s golf head coach Therese Hession said. “We made some mistakes but the conditions and having many of our players learn about this venue made things difficult. I’m really proud of their effort and they can see that they can play with many of these top teams in the country.”

The Ohio State women’s lacrosse team dropped Cincinnati, 16-6, to kick off its season at the Gettler Stadium in Cincinnati, Ohio. Sophomore Sophie Baez and junior Liza Hernandez gave the Scarlet and Gray four-goal efforts, while junior Jill Rizzo stopped 16 shots for the Buckeyes and denied all eight of the Bearcats’ free-position attempts.

The Ohio State men’s lacrosse team used seven first-quarter goals to jump out to a 10-3 halftime lead and hold off Boston University, 17-10, at the Woody Hayes Athletic Center.

Coming off of a season-opening win against Cleveland State where they combined for six goals, Jack Jasinski and Tre Leclaire filled the stat sheet again. The high-powered duo combined for nine goals, with Jasinski netting a career-high five goals and Leclaire adding four himself.

The Ohio State pistol team hosted the 2019 Collegiate Pistol Sectionals, hosting Akron and Purdue, who both competed with less than a full team, as well as an individual from Ashland.