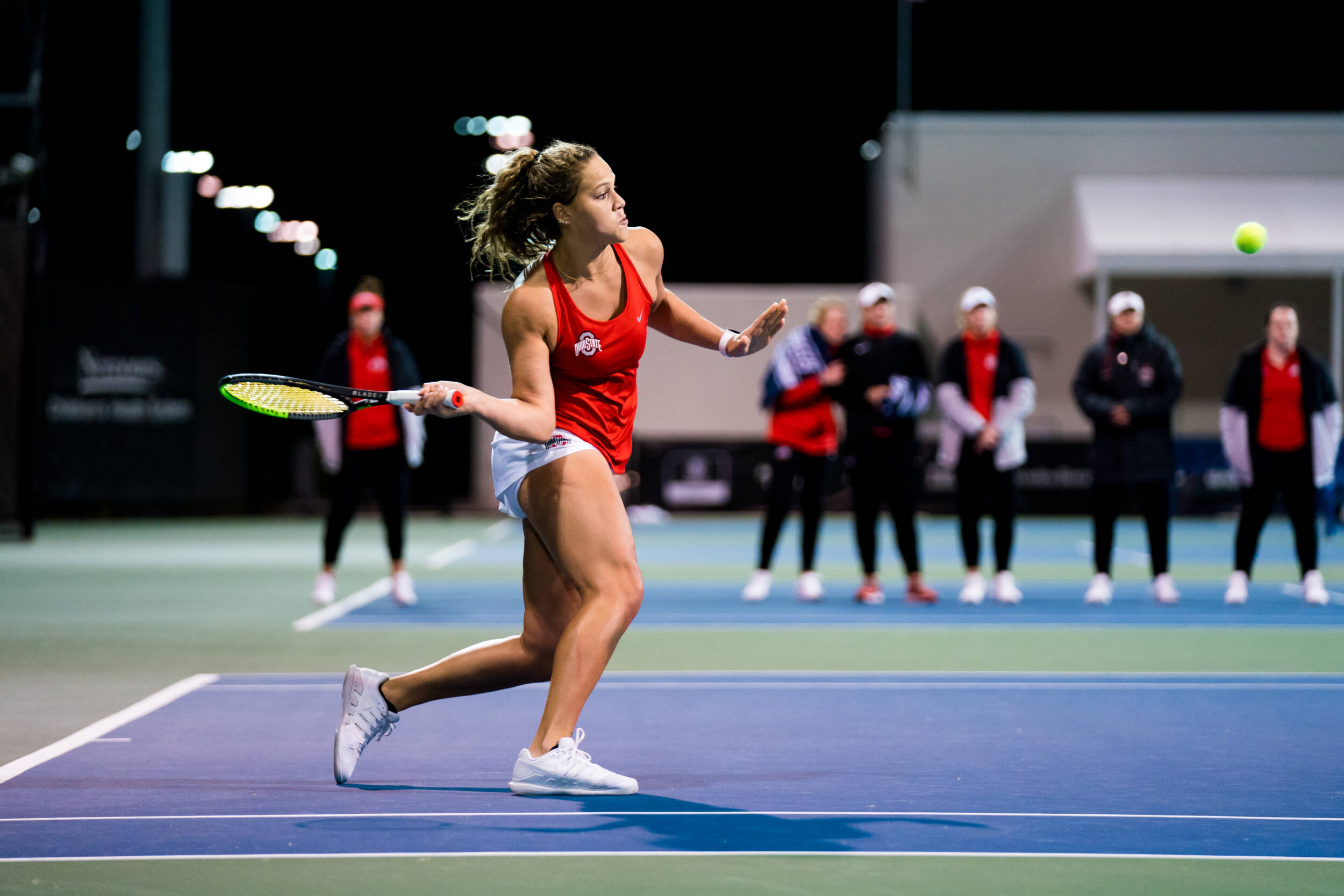 Another week, another big win for Ohio State tennis, this time from the women’s team. On top of that, the Buckeyes captured another title, this time in women’s track and field, while the baseball team has continued its early-season woes.

“It’s always tough to get a conference win on the road,” head coach Melissa Schaub said. “We came out strong in doubles, which was a good sign for us. Shiori is playing very well right now and for her to get off the court quickly like that was big. Purdue is a good team and fought hard. We will keep looking to get better and keep improving. That has to be the focus.”

While that win was big, a 4-3 win over No. 2 Florida State was the story of the week. The win moved the Buckeyes to 8-3 on the season, and came thanks in large part to a strong showing by Fukuda, Wolf, Luna Dormet and Kolie Allen in singles, which was enough to overcome losing the doubles point.

“That was an unbelievable college tennis match,” Schaub said. “It was everything you’d want leading up to a match like this and it was a great finish. And Buckeye Nation was everywhere; they help us wherever we go. The fan support was amazing and this was something we will never forget.

“For us to get outside for a couple of days and to win a match like this, it shows a lot about our players and their character. I’m really proud of how we handled the situation. On top of that, we had TV and the crowd, and that’s not something that we have every day. Win or lose, this makes you stronger. We are going to be better in the long run because of tonight.”

The Buckeyes take the court against Northwestern on March 7.

Ohio State opened postseason play with two dominant performances in the first round of the WCHA tournament, sweeping Minnesota State and setting up a Final Faceoff series with Minnesota on March 7 and 8.

Game one saw the Buckeyes pull away late with two third period goals for a 4-2 win. Sophie Jaques tallied two points in the first period from a goal and an assist, while Jincy Dunne notched a team-high three points, all on assists.

Game two gave the Buckeyes a 1-0 win, thanks in large part to a stunning showing from goalie Andrea Braendli, who had 20 saves and posted her third shutout of the season. Additionally, Emma Maltais broke the single season Ohio State assist record, and now has 39 on the season.

Ohio State got back into the win column briefly over the weekend, claiming an 11-6 win in game one of its weekend series against Lipscomb, which also stood as the 300th win for head coach Greg Beals at Ohio State.

“There was a lot to like today and I’m really proud of the guys,” Beals said. “Coming off a tough weekend, having a handful of guys out with illness, it was far from ideal leading into the game but we put guys on the field who were ready. They were ready to play and they took advantage of their opportunity. We had contributions up and down the lineup and received solid, workman-like starting pitching from Garrett Burhenn.”

The Buckeyes couldn’t maintain the momentum, dropping game two 5-4 on a walk-off, and the rubber match, 4-2. Now, the Buckeyes sit at 3-6 on the season entering a March 6 matchup with Stetson.

The Buckeyes took second place at the Big Ten Championship, falling behind Michigan but landing just ahead of host Indiana. It was Ohio State’s 12th straight finish on the podium at the event.

Ohio State also earned 13 individual top three finishes with three gold medals, six silver and four bronze. Andrew Loy earned golds in the 200 IM and the 200 freestyle, while Lyle Yost earned the third on the platform diving competition. The Buckeyes will have their last chance meet on March 8.

Ohio State fell to 3-2 on the season with a 17-16 loss to Cornell, despite a furious fourth quarterback comeback attempt that came up just short. Tre Leclaire tied his career high with six goals, but Cornell goalie Chayse Ierlan pulled off a save with just under five seconds to play to retain the win for his team. The Buckeyes, who entered the final period trailing by six goals, rattled off six of the game’s final seven goals.

“Credit to a good Cornell team,” said head coach Nick Myers. “It was a great back and forth battle and we just ran out of time at the end. There’s plenty to tighten up but also a lot to build on after today.”

They’ll take the field next against Hofstra, March 7.

The Buckeyes have Ball State up next on March 4.

Ohio State fell to 4-3 on the season with a loss to UMass, 21-16. Ali Beekhuizen and Sophie Baez both registered hat tricks, while Chloe Johnson, Liza Hernandez and Janie Cowley scored two goals. The Buckeyes put up a strong offensive showing but had trouble defending keeping goals out of their own net, despite 20 saves from goalie Jill Rizzo.

The Buckeyes have Marquette on March 7 next up on the schedule.

Ohio State finished fifth at the men’s Big Ten Championships, buoyed by three individual silver medals, along with a silver medal in the 4×400 relay with a 3:06.12 finish. Individually, Tyler Johnson took second in the 200m with a 20.87 time, along with second in the 400m (45.97). Clarence Foote-Talley too second in triple jump, leaping 15.88m. Additionally, Ryan Harrington placed third in the men’s 600-meter run (1:17.57).

No. 3 Ohio State struggled mightily in its first outdoor match of the season against No. 35 Georgia, and fell, 4-0. The Buckeyes dropped the doubles point for just the second time this season, while pushing five of six singles matches to a fifth set, though they were unable to win any of those. Kyle Seelig was on his way to a win, but the match was called for Georgia before he could seal the win.

The Buckeyes will take the court next against No. 8 Stanford on March 4.

The women’s golf team placed eighth at the Westbrook Invite, with a 285 team score on the final round, Ohio State’s second lowest final round score of the year. Aneka Seumanutafa tide for ninth at 7-under for the tournament; Lauren Peter tied for 26th at 1-under; Adeena Shears tied for 50th at 3-over; Skylar Thompson and junior Yukie Sasaki rounded out the Ohio State lineup tied for 63rd at 6-over.

Next up for the Buckeyes is the Dr. Donnis Thompson Invitational from March 10-11.