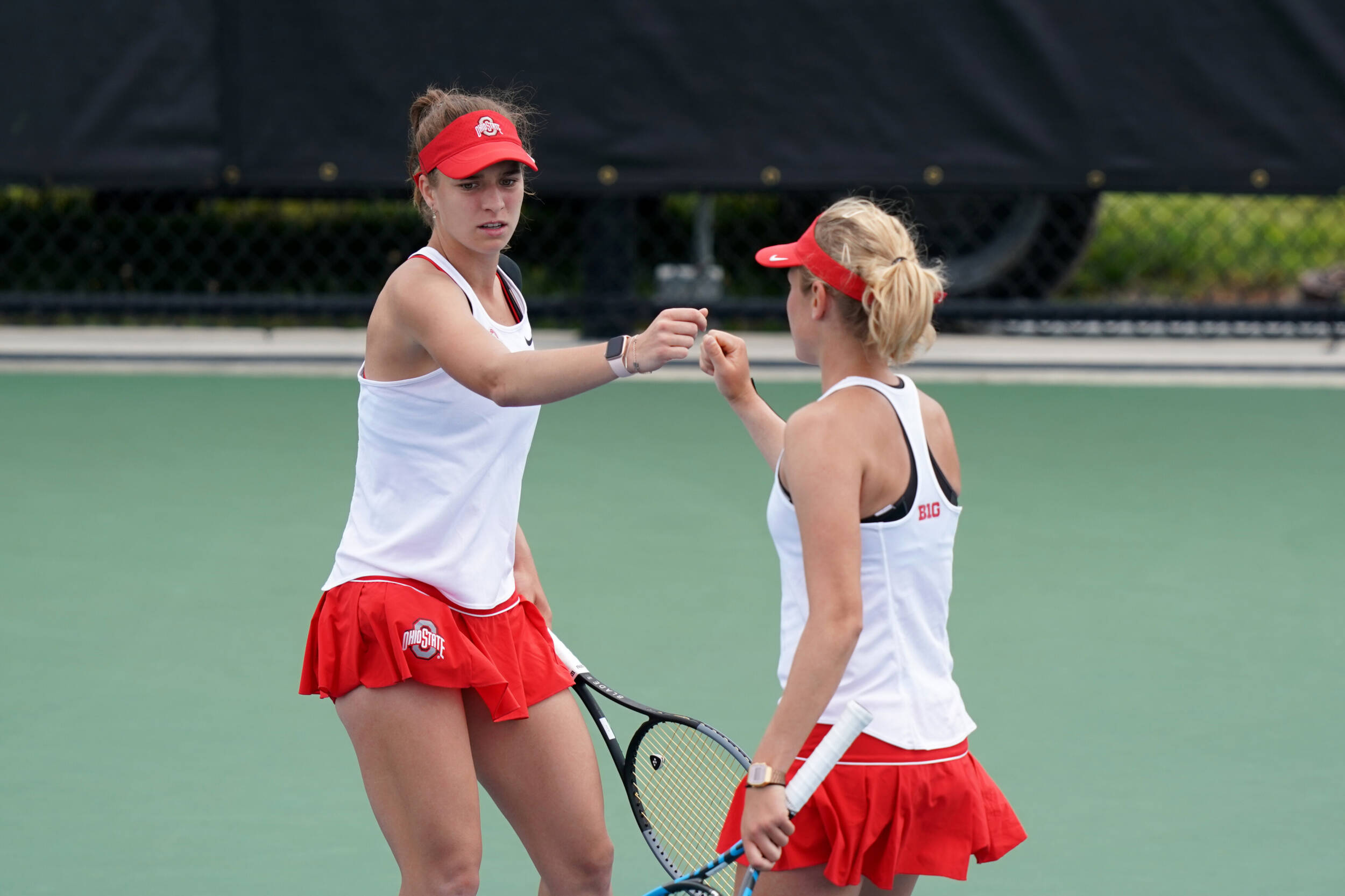 The No. 15 women’s tennis team saw its season come to a close with a 4-1 loss to No. 2 Texas in the round of 16 of the NCAA Tournament. The Buckeyes close the season with an impressive 23-4 record and a Big Ten title, though its expectations certainly exceeded even those lofty peaks.

“Texas is a very good team and they played too well for us today,” head coach Melissa Schaub said. “At the same time, I couldn’t be prouder of our team. We didn’t play our best tennis but we fought and competed as hard as we could out there. We accomplished a lot this season during a very difficult year. We have a lot returning next year and I hope we can remember this feeling and try to build on it.”

Ohio State was in a tough spot from the beginning, dropping the doubles point against No. 19-ranked Kylie Collins and Lulu Sun on court one and No. 47-ranked Charlotte Chavatipon and Peyton Stearns on court three.

Sun extended the lead for Texas to 2-0 with the first individual win against Kolie Allen, 6-1, 6-1. A 6-2, 6-0 win for  Cantos Siemers gave Ohio State its lone win of the day, as Chavatipon toppled Lisa Hofbauer 6-14, 6-4 and Turati knocked off Isabelle Boulais 6-1, 7-5. Siemers will compete in the singles championship, while Boulais and Allen will compete for the doubles title. Full scoring via Ohio State.

Ohio State’s women’s tennis team won the Big Ten Championship with 117 points, edging out Indiana (109) and Minnesota (106) behind a spectacular performance from Anavia Battle. Battle won the 100 meters, the 200 meters and ran a leg on the No. 1 4×400-meter relay team for the event. It’s the second straight title for the women and the eighth in program history, all earned under track and field director Karen Dennis.

The men’s team finished fifth with 71 points after a huge 60-point Sunday on the strength of wins from Tyler Johnson in the 400, Eric Harrison in the 200 and Nick Miller in the 800 and a win in the 4×100 relay.

The Buckeyes will next compete at the NCAA East Regionals in Jacksonville, Fla., on May 27-28.

Ohio State scored 158 points in the seven-race Big Ten Championship, finishing second behind Michigan but ahead of Rutgers. The Buckeyes have won seven of the last 10 Big Ten titles, though this is the second straight second place finish.

Leonie Heuer was named first team All-Big Ten, while Liza Simaceva and Jessy Vermeer were picked second team All-Big Ten. The 2021 NCAA Championships are up next, from May 28-30 at Nathan Benderson Park in Sarasota, Florida.

Ohio State celebrated senior day with a series victory over Michigan State, locking up a 3-1 win in the weekend matchup with a 5-0 win on Sunday. Allison Smith starred in the circle for the Buckeyes in that fourth game, pithcing six strikeouts to finish at 134 strikeouts in 132.2 innings on the season. She combined with senior Payton Buresch for the shutout.

Meggie Otte led the offense, knocking in three runs, two off of a second inning single and the third on a fifth inning sacrifice fly.

The Buckeyes bookended the series with blowout wins, taking game one 7-1 behind a four-hit day for Buresch and two seventh inning strikeouts from Skylar Hayward. Sam Hackenbracht hit another home run, this time earning the Buckeyes two runs, while Mariah Rodriguez went 3-for-4 on the game.

Ohio State and MSU split the Saturday double-header, as the Spartans took the first game 5-2, but Ohio State won the second in dramatic fashion on a Kirsten Eppele walk-off, facilitated by 10 shutout innings from Buresch. This series ends the season for the Buckeyes.

Ohio State toppled Purdue to close out a series win mid-week after the game was previously postponed, but fell to Michigan State in a three-game series over the weekend to move to 19-16 on the season. Time is running out for the Buckeyes if they want to make a run at postseason play without a Big Ten Tournament to look ahead to.

The Buckeyes rode a three-run second inning to beat the Boilermakers mid-week, 5-1, but couldn’t keep up with MSU in game one, allowing 10 runs in a 10-7 loss. It was a tough showing for the nebulous Seth Lonsway, who allowed six runs on five hits in five innings.

The Buckeyes again couldn’t keep up on Saturday, falling despite a strong first start of the year for Griffan Smith, who went 3.1 scoreless innings with two hits and two strikeouts. Ohio State fell, 2-0.

Jack Neely collected a win out of the bullpen in game three, a 7-3 romp for the Buckeyes. He pitched a pair of scoreless innings and set T.J. Brock up for his seventh save of the season. Brent Todys, Nick Erwin, Kade Kern and Zach Dezenzo all had multiple hits on the day.