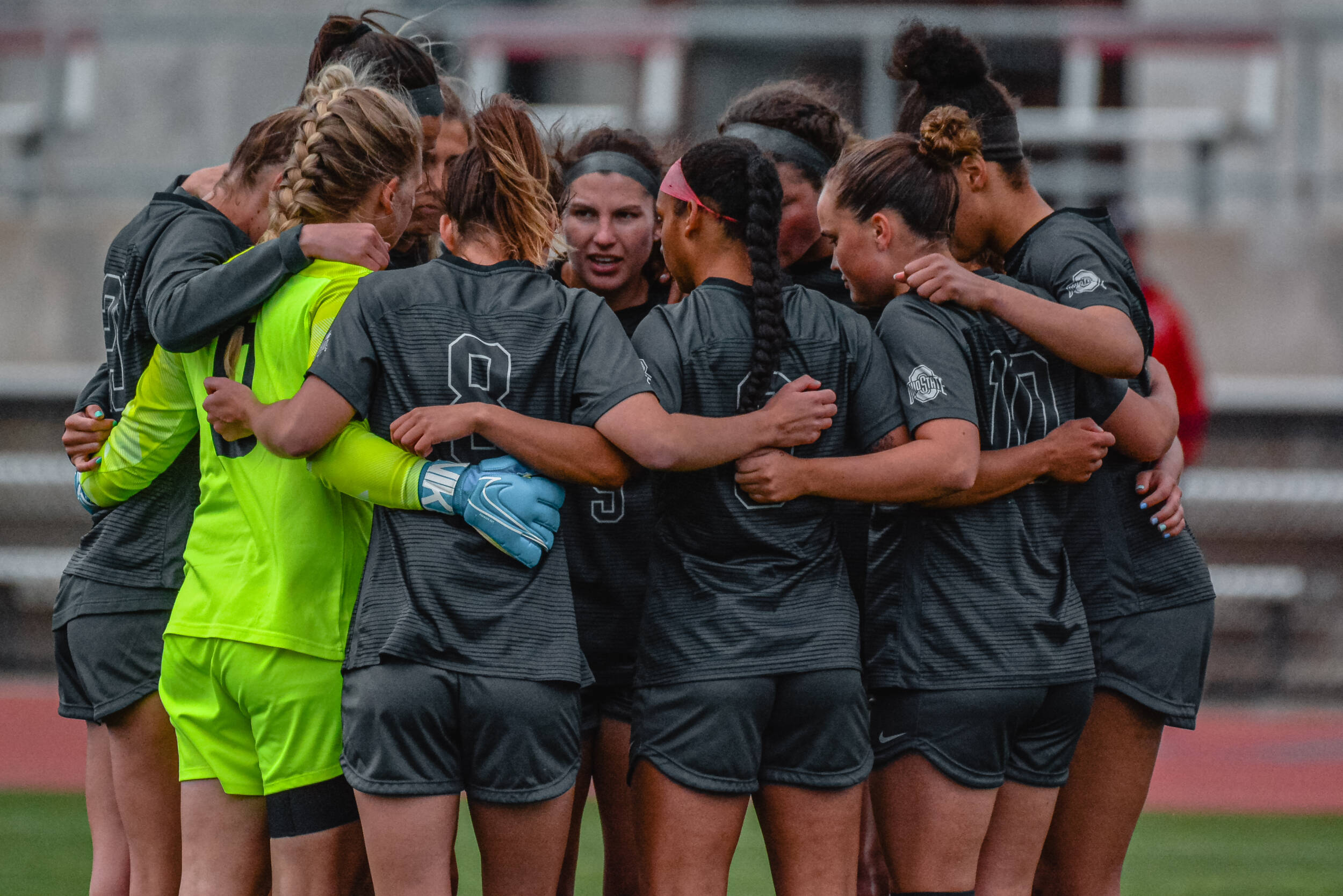 Be sure to sign up for four free issues of the print edition of Buckeye Sports Bulletin, no card required. You can sign up at the link here: http://www.buckeyesports.com/subscribe-4issue-trial/, or call at 614-486-2202.

Field hockey gets the lead note this week, because after as brutal a start to the season as a team can possibly have, the Buckeyes have rattled off four straight to improve to 4-7, sweeping Michigan State in two games this weekend.

The Buckeyes throttled the Spartans from the beginning in their meetings. They outshot MSU 15-0 in the first period and entered the half with a 2-0 lead on the way to a 4-2 victory. Ohio State slipped a little in the second half but was never seriously challenged. Emma Goldean, Mackenzie Allessie, Katie Pyle and Nikki Trzaska notched goals for the Buckeyes.

“I was really happy with how we started the game,” said head coach Jarred Martin. “We controlled the game, moved the ball well and had some great scoring opportunities leading to the halftime score.

“The second half was a different story as we let up and got away from what was successful, and more importantly some fundamental OSU field hockey principles. Michigan State was able to generate their attack from there and keep the game close so credit to them for taking advantage.

“This was an important game for Big Ten standings and really liked seeing four goals from four different people. We will get back at it tomorrow to prepare for a more complete performance on Sunday.  We are finding different ways to win and we are building some good momentum leading into the final part of the regular season.  Keep focused, keep growing, keep to our objectives.”

Game two was never close. Allessie and Goldean each scored twice on the way to a 5-0 victory.

“Great win today for the team,” said Martin. “Our defensive intensity was much improved and we moved the ball well. Those two elements help lead to the shutout win and some really good goal scoring opportunities. We have worked hard the last few weeks to find ways to use our speed and skill with simple decision making and it showed today. We intercepted a lot and looked composed with the ball because of our off ball movement.

“Another two-win weekend in the Big Ten is always a great weekend. To also get a shutout against a quick Michigan State team is even better. I like where we are with our rotations, our game play, and our set pieces leading into our last regular season weekend. Momentum is building and we need to stay disciplined and focused leading into practice on Tuesday. This conference is so competitive so we need to make sure we are ready to go in all facets to play our best and give us a chance to win….starting with a very good Penn State team this upcoming weekend.”

Ohio State has to play the waiting game until April 19 after its Big Ten season came to a close in the second round of the conference tournament against Rutgers. The Buckeyes opened tournament play with a 4-2 victory over Maryland, led by a pair of goals from Peyton McNamara, but they couldn’t find that magic again against the Scarlet Knights in a 1-0 loss. Rutgers found the back of the net with just 10 minutes to play.

With nothing left on the schedule, Ohio State will now just wait for NCAA Tournament selection day on the 19th. It’s a 48-team tournament, which bodes well for the No. 22 Buckeyes.

The men’s soccer team doesn’t have quite as much to look ahead to. It lost to Penn State 3-1 in the first round of the Big Ten season and has likely played its final match this season, as a 3-6-1 record isn’t expected to be enough for a tournament bid. Devyn Etling scored the lone goal for the Buckeyes, late in the match when it was already all but decided.

The 14th-ranked men’s lacrosse team is back to .500 after a 14-12 win over Johns Hopkins to improve to 4-4 on the season. The Buckeyes jumped out to a 10-7 halftime lead and held it despite a JHU run to open the second half. Jackson Reid had four goals and two assists, while Jack Myers and Ryan Terefenko both had hat tricks.

“Another hard-fought Big Ten game just as we expected,” head coach Nick Myers said. “We made the plays on offense when we had to and got contributions from a lot of different guys which we’ll need moving forward. It was awesome to see Buckeye Nation back in The Shoe and we thank them for their support.”

Another week, another pair of Big Ten blowouts. No. 8 Ohio State curb-stomped Purdue and Indiana in back to back matches to improve to 16-2 on the year. The Buckeyes have now won seven straight.

The Buckeyes blasted Purdue in match one, taking a 7-0 victory and the season sweep of the Boilermakers. Scoring via Ohio State.

“The guys are starting to get some confidence,” said senior John McNally. “We’ve played on the road the last couple of weekends and it’s been tough. But I think we’re starting to click. Doubles is getting close. We have another big match on Sunday at Indiana to close out this road trip.”

Not to be outdone, the No. 8 women’s tennis team also lit up a pair of foes, dropping Minnesota and Wisconsin without losing a single point in the process to improve to 17-3 on the season.

Lucia Marzal, Luna Dormet and Madeline Atway secured singles victories for the Buckeyes against Minnesota, along with the doubles point for a 4-0 victory.

The Buckeyes had no interest in slowing down against Wisconsin, claiming a 7-0 win.

Ohio State took game one off of Michigan in its three-game series in Ann Arbor, but dropped the final two games, losing the series and falling to 13-9 on the season. That first game win came after a furious five-run rally for the Buckeyes on the way to a 7-4 victory.

“We’ve got some tough guys that just keep battling,” said catcher Brent Todys, who led the team with three RBI. “We’re never going to be the team that just goes away. 1-9 we have guys that can get a big hit. We kept fighting today and we’re having some fun right now.”

Game two saw star pitcher Seth Lonsway strike out 10, but he allowed four runs and Michigan stormed to a 7-0 victory.

“We weren’t able to control their run game today,” Ohio State coach Greg Beals said. “There were a couple of situations where we had them and yet we didn’t execute. I give Michigan credit as they had a game plan against Seth and executed it. They were able to capitalize when they had guys on base and we weren’t able to.”

The Buckeyes couldn’t get their defense off the field, allowing 16 runs in a 16-7 loss in game three.

The softball Buckeyes dropped three of four against Michigan and fell to 13-10 on the season. Michigan opened the series with a 7-0 win, thanks to a five-run explosion in the seventh inning.

The Wolverines took game two as well, 3-1, but Ohio State got on the board in the second half of a double-header on Saturday, claiming a 3-2 victory. Meggie Otte led the Buckeyes with a crucial two-run single in the fifth inning to give them the eventual win. Michigan took game four, 11-0.

No. 19 Ohio State fell to No. 2 Northwestern on Big Ten Network April 8, squandering a 9-8 halftime lead on the way to a tough 21-14 loss. Northwestern scored nine of the first 10 goals in the second half. Nicole Ferrara led the Buckeyes with a career-high six goals, followed by Liza Hernandez, who had four goals on the day. Ohio State will close the regular season at Michigan April 16.

Ohio State couldn’t get it done against Ball State in the MIVA tournament first round, falling 3-1 (31-29, 25-19, 21-25, 28-26). Sotiris Siapanis had 25 kills, Martin Lallemand added 16 and Samuel Clark had 14, while Noah Platfoot and Michael Wright notched 28 and 26 assists, respectively. The future looks to be bright for Kevin Burch’s Buckeyes, but the 2021 season has come to an end after this loss. Ohio State finishes with a 9-10 record.