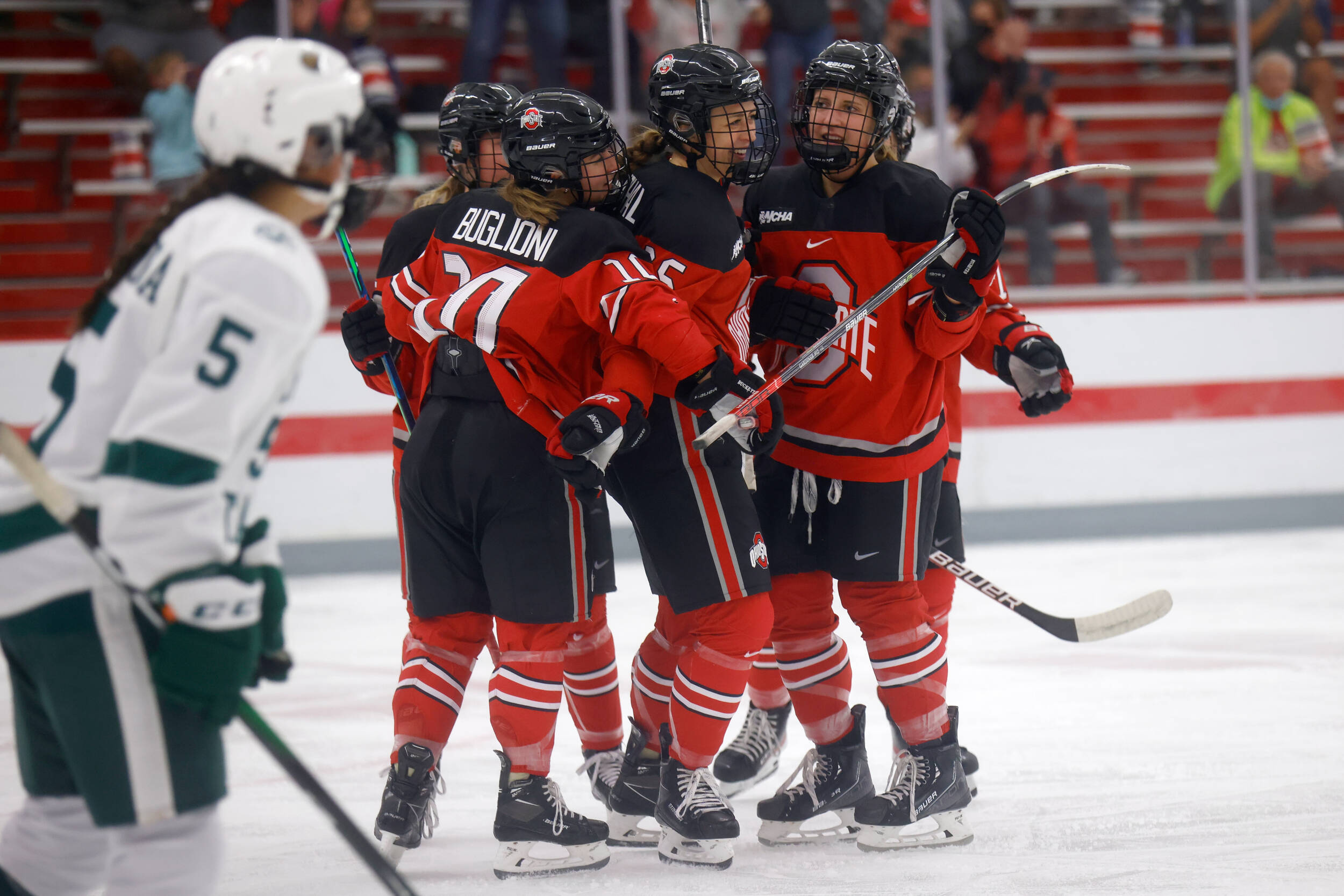 In the Western Collegiate Hockey Associaton, Nadine Muzerall and Ohio State find a way to win games.  On Friday, the No. 2 Buckeyes defeated Bemidji State, 7-0, and claimed a 3-1 win on Saturday, improving to 6-0-0 this year.

It is the first time in program history that Ohio State opened its season with six wins, passing a streak of five consecutive wins at the start of the 2012-13 campaign. In starting the season with three conference opponents, the program also has its longest winning streak against WCHA opponents.

Ohio State will hit the road to face No. 1 Wisconsin on Oct. 23 and 24. The first game is set for 3 p.m. EST while Sunday’s game, which will broadcast on the Big Ten Network, will be played at 4 p.m. EST.

Wisconsin holds a dominant lead over Ohio State in the all-time series. The Buckeyes are 17-73-10 (.220) against the Badgers, with the program’s most recent victory coming last season — a 2-1 overtime win in Madison.

Ohio State baseball will return to its typical 53-game schedule this season, including a 24-game conference slate, four series at home and four on the road and a return to the Big Ten Tournament at the end of May.

The Buckeyes will open their season at the Snowbird Classic in Port Charlotte, Fla. on Feb. 18 and will play BYU and Indiana State. Ohio State will take a brief trip to Texas State before traveling to Fayetteville, N.C., for the Armed Forces Invitational against Campbell, Pittsburgh and Army.

Ohio State will make two more road trips to West Virginia and UNC-Wilmington before hosting Wright State for its home opener on March 22. The Big Ten begins its season at the end of March, with the Buckeyes traveling to Purdue, Maryland, Michigan and Northwestern. The team will also host Nebraska, Michigan State, Rutgers and Penn State.

Other home matchups include Toledo, Youngstown State, Marshall, Campbell and Cincinnati. The Buckeyes open weekend comes at the end of the regular season when they host USC-Upstate in a non-conference series. Ohio State will play two road non-conference games — the first against Dayton at Day Air Ballpark, home of the Dayton Dragons and the second at Kent State.

The No. 7 Buckeyes ( avenged a five-set loss to the No. 6 Boilermakers on Sept. 24, claiming their second top-10 win after defeating Washington in four sets during the opening weekend.

Ohio State outhit Purdue in every set and limited its players to a .135 hitting percentage — the 13th time the Buckeyes held an opponent to a sub-.200 hitting percentage this season. Gabby Gonzales totaled at least 10 kills for the sixth time this year and recorded her 500th career dig, becoming the 35th player in program history to collect 500 digs and 500 kills in a career.

On Sunday, Ohio State (16-2, 6-2) claimed its 12th sweep of the season against Rutgers, a program yet to win in the Big Ten this season.

The Buckeyes hosted the Scarlet Knights in a match that only lasted one hour and 12 minutes. Ohio State finished the game with a .443 hitting percentage behind strong performance Rylee Rader, who reached double-figure kills for the seventh time this season, finishing with a match-high 12 kills.

Gonzales surpassed 10 kills for the seventh time this season and Jenalysa Moore had a season-high eight kills.

Ohio State men’s and women’s cross country competed in Tallahassee, Fla. for the FSU Invite and Pre-Nationals on Friday morning. The women ran a 6K while the men ran an 8K.

Addie Engel finished first for the women, ending in 11th-place with a time of 20:11.0, beating her previous mark by nearly 17 seconds. She placed in the top 16 in all four of her races this year. Hannah Moulton almost beat her personal best, falling short by 1.2 seconds and Akemi Von Scherr finished third for the Buckeyes in a career-best time. Daniella Santos and Andrea Kuhn rounded out the top five.

Ohio State women’s soccer dropped a heartbreaker to No. 19 Purdue in overtime on Thurday night when the Boilermakers scored just 34 seconds into the extra session and left Columbus with a 1-0 win.

The Buckeyes dominated the final 45 minutes of regulation and looked to be the more fit side heading into overtime. Still, Purdue’s Teagan Jones lofted a cross into the box and Big Ten goal leader Sarah Griffith tapped in the game-winning goal.

Ohio State (8-7-1, 3-4-1) bounced back with a 2-1 comeback win over No. 22 Michigan on Sunday afternoon. The Buckeyes got a game-tying goal from Chloe Delyser in the 66th minute via a penalty kick and freshman Kailyn Dudukovich converted a game-winning goal in the 85th minute.

Senior goalkeeper Bailey Kolinski made six stops for Ohio State and now has 46 saves on the season, good for a .657 save percentage.