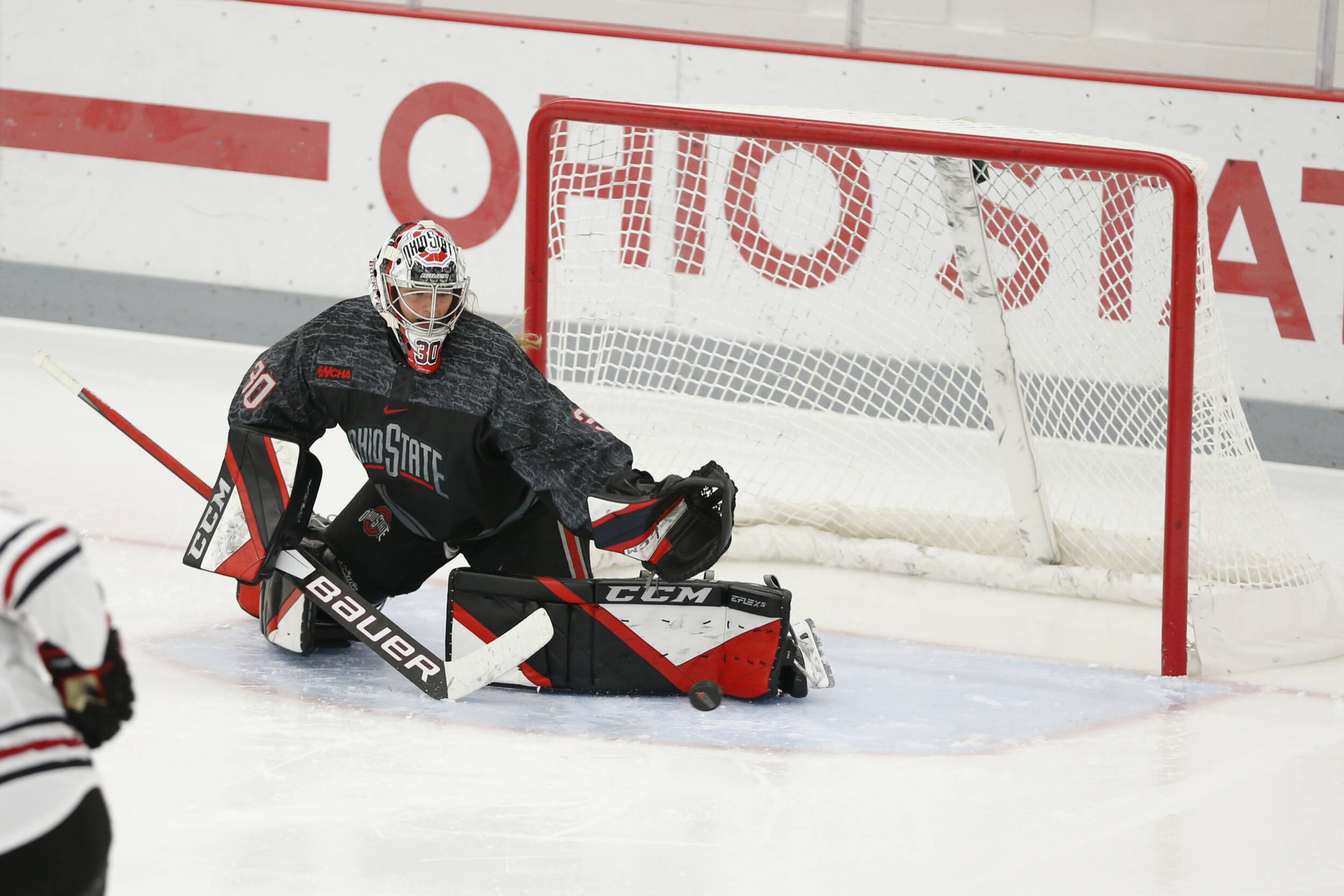 Ohio State women’s hockey finished its 2021 home slate undefeated as it picked up two wins against Minnesota State over the weekend.

The No. 2 Buckeyes (12-2-0) defeated the Mavericks 6-3 on Friday night behind a strong performance from Liz Schepers, who became the 13th player in program history to record 100 career points. On Saturday, Ohio State beat Minnesota State 9-0 in goaltender Amanda Thiele’s first career shutout.

Clair DeGeorge recorded her 100th point in game two against the Mavericks. She tied her career single-game high of two goals and added an assist to bring her career point total to 100. She came to Ohio State with 89 points and has recorded 21 this season.

Jenna Buglioni tied her career single-game high with four points. The sophomore sniper had two assists and two goals in the afternoon. She is tied for second in program history for point streaks with 14. Madisyn Wiebe recorded her first collegiate goal and point, giving the Buckeyes their fourth goal of the day.

Riley Brengman scored her first goal of the season and third career goal on Saturday. With two points against Minnesota State, the sophomore has 14 career points from three goals and 11 assists.

The Buckeyes head to Washington D.C. for the “D1 in D.C.” tournament on Nov. 26 and 27. Ohio State will face St. Lawrence on Friday and Penn State on Saturday.

Five players had double-figure digs for the Buckeyes. Kylie Murr led the team with 24 and Sydney Taylor recorded 11 — the first time she reached that mark during her collegiate career. Gabby Gonzales had a match-high 16 kills, becoming the 28th player in program history to reach both 600 career kills and digs.

Rylee Rader made it past 10 kills for the 11th time this season and totaled 11 kills. She was only one block shy of her career-high, finishing the game with 10. Mac Podraza had her 11th double-double of the season with 42 assists and 11 digs.

The Buckeyes claimed their third ranked win of November when they defeated the Nittany Lions. Murr moved into fifth in program history in career digs with 17 in the match, bringing her total to 1,351. Emily Londot reached double-figure kills for the 19th time this season, finishing with 22 kills — one shy of her season high.

Hannah Gruensfelder finished the match with a season-high 19 digs while Gonzales tallied her 22nd overall and 13th-straight match with at least 10 kills.

Ohio State wraps up the regular season with a pair of road matches next week. The Buckeyes face Rutgers on Wednesday at 7 p.m. before Friday’s matchup with Maryland at 7 p.m.

The NCAA Final Four will be held in Columbus at Nationwide Arena on Dec. 16 and Dec. 18.

Men’s and Women’s Swimming and Diving

Ohio State’s swim and dive team finished in the top two among ten teams on Saturday at the McCorkle Aquatic Pavilion for the OSU Fall Invitational.

The women’s team recorded 2,257 points and totaled nine event wins over the course of three days to finish first. The men’s team finished with 2,283 points and two event wins for second overall.

Ohio State closes out the year at the Toyota U.S. Open from Dec. 1-4. The Buckeyes open their 2022 season at home against Texas and Kentucky in January.