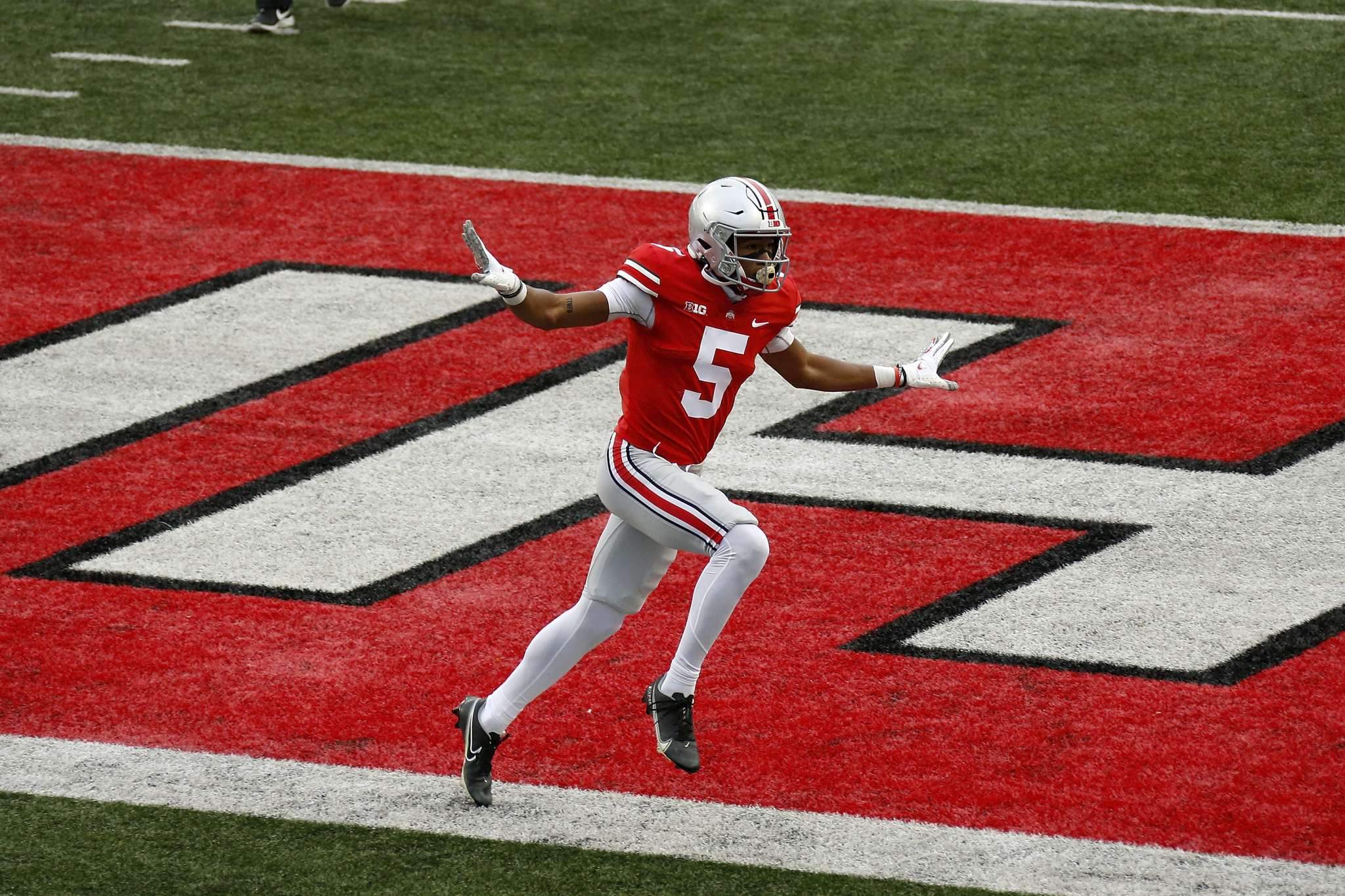 It’s been 14 years since Ohio State had a wide receiver drafted in the first round of the NFL Draft. Former Buckeyes Ted Ginn Jr. and Anthony Gonzalez took their talents to Miami and Indianapolis — the former calling the league home for over 13 years and the latter playing for five seasons before starting a career in politics.

The prolonged drought of first-round talent will likely end this year as Garrett Wilson and Chris Olave are projected to be top picks in the 2022 NFL Draft. Wilson is a top receiver on some Mock Draft Big Boards, and Olave sits anywhere from No. 2 to No. 5 in all rankings.

Beyond Wilson and Olave, the Buckeyes will have others looking to hear their names called by NFL commissioner Roger Goodell or a franchise-affiliated representative. Buckeye Sports Bulletin breaks down each of Ohio State’s potential draft selections in this article.

Wilson could be the first receiver taken in the 2022 NFL Draft. In his most recent mock, The Athletic’s Dane Brugler projected Wilson as the No. 10 overall pick to the New York Jets, claiming he would be the first wide receiver off the board. ESPN’s Mel Kiper Jr. had Wilson landing at No. 13 to the Cleveland Browns, marking him the second wideout selected behind USC’s Drake London.

In Wilson’s three seasons at Ohio State, he recorded 143 catches for 2,213 yards and 23 touchdowns. His high-point ability, balance and athleticism make him a dangerous threat in the passing game. He can also create big plays in the open field utilizing his polished route-running.

Along with Wilson, Olave is well within the conversation to be one of the first wide receivers off the board and a top-20 pick. Kiper had Olave as the No. 19 pick to the Philadelphia Eagles, while Brugler had Olave at No. 28 to the Detroit Lions.

Olave is Ohio State’s all-time leader in touchdown receptions after breaking David Boston’s record against Michigan State on Nov. 20, 2021. He has proven himself a significant deep threat. He is arguably the best route-runner in this year’s draft class, making Olave a player who can immediately help an NFL team stretch the field vertically while also becoming a consistent target between 15 to 20 yards.

At 6-5, 315 pounds, Petit-Frere combined tremendous quickness with above-average strength to become one of college football’s best offensive linemen while at Ohio State. He was an Outland Trophy semifinalist and first-team All-American in 2021, making him an enticing selection for any franchise looking for a tackle.

According to Pro Football Focus, Petit-Frere allowed only two sacks at left tackle this season. In 2020, he didn’t allow any defensive lineman to sack former quarterback Justin Fields. Still, Petit-Frere struggled to contain Michigan’sAiden Hutchinson in the BBuckeyes’42-27 loss to the Wolverines, and recency bias is real.

In most drafts, Petit-Frere will likely be a second-round projection, but he could sneak into the first round if teams decide to use their pick to fortify the offensive line.

Munford returned to Ohio State in 2021, looking to become a more versatile prospect for NFL franchises. The Cincinnati native had been an All-American at left tackle but decided to move to the interior this season, allowing Petit-Frere and Dawand Jones to assume the outside roles. MMunford’smove, while admirable, proved to be a failed experiment for the Buckeyes — ultimately leading to poor offensive line play and Greg SStudrawa’sexit.

Still, Munford has a proven track record of success at tackle and put countless snaps on tape for NFL scouts to observe. He likely won’t be a Day 1 selection at the NFL Draft, but he could hear his name called in the second, third or fourth round.

Ruckert is arguably the most interesting prospect in the 2022 NFL Draft. He never accumulated strong statistics for Ohio State, hauling in 54 catches for 615 yards and 12 touchdowns in four years. However, that can be easily excused by the BBuckeyes’talent at wide receiver rather than an indictment on Ruckert as a pass-catcher.

Ruckert is 6-5, 250 pounds with the athleticism to make big plays over the middle of the field, so it wouldn’t be surprising for an NFL franchise to use an early selection on him. He has been projected as early as the second round and can increase his stock in the RReese’sSenior Bowl in February.

Another Buckeye who will look to impress NFL scouts at the Senior Bowl is Garrett, who’s also projected to be selected in the draft’s middle rounds after two productive seasons as a starting defensive tackle. An All-American in back-to-back seasons, Garrett finished his Ohio State career with seven tackles for loss and 5 1/2 sacks as a super senior.

Garret doesn’t offer prototypical size for the position, but he has a unique ability to disrupt the backfield in the passing and running games. He will likely be a mid-round pick in the 2022 NFL Draft for a franchise looking for depth at the three-technique.

Smith finished his Ohio State career with only eight career sacks in four seasons. Still, he offers plenty of intrigue as an NFL prospect because of his athleticism. Smith possesses above-average quickness off the edge and enough to bend to provide depth for an NFL defensive line. He has proven to be a disruptive pass-rusher and run-stopper in small sample sizes.

Like Ruckert and Garrett, Smith will use the Senior Bowl as a final opportunity to improve his draft stock before the NFL Combine in the spring. He should test well in Indianapolis, so he could move up the board if teams are willing to take a flier on an athletic talent from a school with the pedigree of Ohio State. Of course, learning under defensive line coach Larry Johnson never hurts either.