Ohio State’s History With Clemson Is Trio Of Heartbreaking Defeats 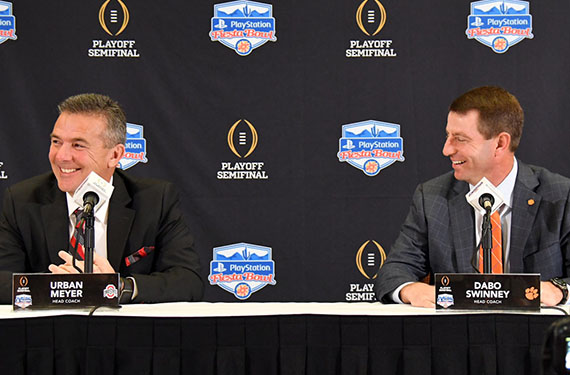 There are only two teams in the history of college football that can say that they have played at least three games against Ohio State and won all of them.

One of those teams is Florida State, who won a pair of games against a Buckeyes in 1981 and 1982, both of which were in Columbus, and then followed it up with a 31-14 victory over Ohio State in the 1998 Sugar Bowl.

Bobby Bowden ended his 34-season run with a 3-0 record against Ohio State, something that can be accomplished again by a new head coach when the Buckeyes face off against Clemson on Dec. 28 for a spot in the national championship.

The Tigers also hold that 3-0 record, but with two of the games coming this decade behind the helm of Dabo Swinney, and the first taking place more than 40 years ago.

But unlike Florida State, Clemson has managed to accomplish this feat through three Bowl games, with each one just as crushing as the next, and one of which may be giving the Buckeyes an extra boost heading into this upcoming matchup.

On the other side, 30-year-old Danny Ford was leading a Clemson group that had went 10-1, but not under his primary tutelage. The Gator Bowl was Ford’s first game moving up from assistant coach to head coach after Charley Pell left Clemson for a head coaching gig at Florida following the regular season, and Ford’s first game as a head coach at any level.

On the surface, the game was quite an impressive feat. Ford managed to go toe to toe with one of the best coaches in the sport and come out of it with a two-point victory that was capped off by Clemson linebacker Charlie Bauman interception on quarterback Art Schlichter with 1:59 remaining.

But that interception not only ended Ohio State’s season with a loss: It also was a moment that led to the end of an era.

Bauman was tackled out of bounds on the Ohio State sideline, and when he got up, he looked toward the OSU bench for just a moment, enough time for Hayes to lose his cool and punch Bauman in the throat.

The moment ended with a 15-yard unsportsmanlike penalty that didn’t amount to much as the Tigers ran out the clock and won the game 17-15, but it was the final straw that ended Hayes’ near-three-decade-long tenure as Ohio State’s head coach.

The next morning, Ohio State athletic director Hugh Hindman fired Hayes, who ended his Ohio State career with a 205-61-10 record.

After a 36-year gap, Ohio State once again had a shot to get its first ever win against Clemson, and again it was on a major stage in the form of the Orange Bowl on Jan. 3, 2014.

This time around, it was the No. 12 Tigers against the No. 7 Buckeyes in a shootout that had multiple changes and went down to the final minutes to ultimately decide it.

Clemson’s Tajh Boyd and Ohio State’s Braxton Miller each exchanged long quarterback runs for touchdowns — Boyd’s from 48 yards and Miller’s from 33 — to open up the scoring before Clemson’s offense scored on three of the next four drives. Two of those scores were Boyd touchdown passes, while the other, also Boyd, was a safety in favor of Ohio State after an intentional grounding penalty occurred in the end zone.

A 57-yard touchdown from Miller to tight end Jeff Heuerman, as well as a block on the ensuing extra point, made the score 20-15 before Miller ran another one in to give Ohio State a 22-20 lead at the end of a wild half of football.

Ohio State scored again to make it 29-20 before the Tigers came storming back with a pair of Boyd touchdown passes made is 34-29 after three. In the fourth, Miller found running back Carlos Hyde for a touchdown with 11:35 left to again give the Buckeyes a lead, but it would all be for naught.

Boyd threw his fifth touchdown pass on the evening with 6:16 to play, and a Miller interception late officially sealed Clemson’s second victory in program history over the Buckeyes.

The game was a heartbreaker for Ohio State, but it was something that occurred on the first OSU possession that would make the largest impact. On the opening possession, Miller injured his shoulder, but played through it the rest of the game, finishing with 269 total yards and four total touchdowns in the loss.In August 2014, just weeks before the season was ready to get underway with Miller at the helm, he reinjured that shoulder, tearing his labrum in an injury that would have him miss the season, giving J.T. Barrett an opportunity to step up into the starting role.

Barrett, and eventually, Cardale Jones, would lead Ohio State to a national title in the first season of the College Football Playoff.

The other two matchups had pivotal moments that ended up shaping the program with the Hayes punch and Miller injury, but the 2016 matchup between Clemson and Ohio State is what is still in the minds of most when thinking about the history between these two teams.

“To be honest, I can’t even remember,” Cornell said. “I can’t remember, I blocked it out.”

“I do. It was rough,” Landers said. “It was one of those moments where, for me, I’ll never forget.”

The matchup is eerily similar to the game this year: The Fiesta Bowl, Ohio State and Clemson, a 2-3 matchup for a spot in the national championship, with the only key difference being that the Tigers came in the No. 2 seed.

The game started off well enough for the Buckeyes, with an interception by Gareon Conley on Clemson’s first drive that gave Ohio State the ball on the Clemson 33.

But after the offense stalled out, gaining only three yards, the Buckeyes decided to attempt a 47-yard field goal, one that Tyler Durbin missed, keeping the game scoreless early.

The Tigers would go down and hit a field goal to make it 3-0, when again Ohio State got into prime position to score, went backwards, leading to a 4th-and-18 that led to another 47-yard field goal attempt by Durbin, and another miss.

“I just remember we put in so much hard work, and especially with the group of guys that we had, and it was just like we just fell short, and it was one of those things where we kind of asked the question ‘Alright, what did we not do? What did we miss? What did we take for granted?’ ” Landers said. “We put so much blood, sweat and tears into it to get to that moment and just get on the big stage and just didn’t play the way that we wanted to.

“At the end of the day, it’s history, you know what I mean? You try to rewrite a new chapter in this book and see what happens.”

The new chapter will come on Dec. 28, when the same stakes will be on the line for both Clemson and Ohio State.

This time around, Swinney will be fresh off a national title and have to face a new head coach in Ryan Day who has yet to lose in his head coaching career.

For Day, he is not reading too much into the matchup from three years ago.

Relevant or not, beating Clemson will mark a first for the Ohio State program following a trilogy of matchups, each heartbreaking for much different reasons. But Landers and Cornell, two redshirt freshmen at the time, believe in the 2019 version of the Ohio State Buckeyes against the newly modeled Clemson Tigers.

“We know what we have on our team, and we know Clemson’s a great team, that game that we played four or five years ago, it’s a whole different team,” Cornell said. “Whole new scheme, whole new players, and we’re just going there to play our ball, play Ohio State football.”

These team’s rosters may be mostly new, but the stakes remain the same as the last matchup. And on Dec. 28, these two teams can decide if history will repeat itself, or if this is the Ohio State team can buck the trend in the fourth installment of the series.