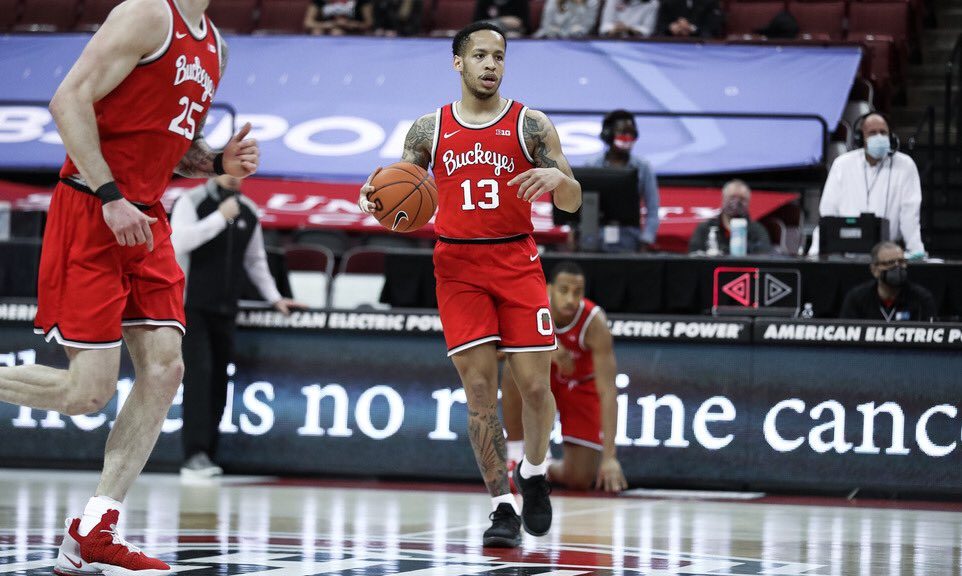 Though neither player has made a final decision of if they’ll return for the extra year of eligibility granted by the NCAA amid the coronavirus pandemic, both fifth-year senior guard C.J. Walker and senior forward Kyle Young will take part in Ohio State’s Senior Day festivities when the seventh-ranked Buckeyes host No. 4 Illinois on Saturday afternoon.

“There are a lot of emotions,” Walker said. “I’ve been through a lot throughout my life and to be in this moment, playing on the big stage and playing for Ohio State, it just really means a lot. Life in itself can be really hard at times, so just being in this moment is really good for me. I’m just really grateful to be in this situation, playing in front of my family, playing for this staff and for my teammates.”

The 24-year-old Walker, who transferred to Ohio State in 2018 after two seasons at Florida State, has averaged 7.5 points, 2.7 assists and 2.4 rebounds during his five-year career, which includes a redshirt season in 2018-19. He’s hopeful fans will remember him as a leader who sacrificed himself for betterment of the team, coaching staff and university.

“I take this seriously, playing for Ohio State. It means a lot,” Walker said. “I’ve met a lot of people since I got here that helped me get to where I am today. I just want them to remember me playing hard, putting my team first and diving on the floor, all of the little things that you don’t see in the box score. I just want to be remembered as the ultimate leader and great overall point guard that wins and gets the job done each and every night.”

“There is going to be a lot of good emotion, reflecting back on what it means to me to play in a Buckeye uniform,” Young said. “I’m happy with everything I’ve been through as a Buckeye, so it’ll be a good experience.”

Young, who played his high school ball at Massillon (Ohio) Jackson, has averaged 5.9 points and 4.3 rebounds in 105 games with the Buckeyes. He’s dealt with a number of injuries during his career, though, including a stress fracture in his leg that forced him to miss four games during the 2018-19 season and still causes him pain today.

Asked if he’ll get emotional during his Senior Day speech, Young said he’s simply focused on thanking those who put him in this position.

“I’m not a man of many words, but I’m going to make sure to get my point across and try not to get emotional,” Young said. “I don’t think I will, but I’ll make sure I thank the people who have helped me get to where I am and recognize everyone that needs to be recognized.”

As for when they’ll make a final decision, both Walker and Young said they’re focused on leading Ohio State as far as they can in the Big Ten and NCAA tournaments, so they’ll decide once the Buckeyes are eliminated or cut down the nets in Indianapolis.

“As of right now, I haven’t made a decision 100 percent,” Walker said. “I’ve been in college for a very, very long time. That’s not to say coming back will hurt anything or make it better, but I haven’t made a clear decision on what I’m doing. We’ll just have to see I the future after we try to win a Big Ten and national championship.”

Saturday’s game is especially important as Ohio State looks to avoid a four-game losing streak to end the regular season. The Buckeyes considered an favorite over the Illini, but check back Saturday morning for updated lines on the game, which tips off at 4 p.m. on ESPN.