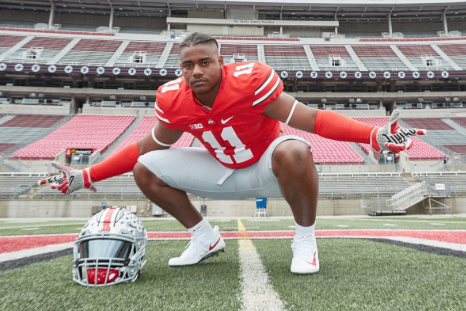 Ty Hamilton is a three-star defensive end from nearby Pickerington Central.

Hamilton had interest in joining the Buckeyes and they hosted him on unofficial visits before he received the coveted offer. He actually refused to do a photoshoot in Buckeye gear on his trips until he received an offer.

“I didn’t want to take photos at a school that hadn’t offered,” Hamilton told Letterman Row following a March visit. “I’m not trying to disrespect the schools that have offered me just because it’s Ohio State.”

Hamilton received his Ohio State offer on May 28, but following a June 7 visit to Penn State, he was strongly considering the Buckeyes’ Big Ten foe. Michigan was also in the mix for Hamilton, and he held additional offers from Kentucky, Indiana, Minnesota and Purdue, but he knew Columbus was where he wanted to be.

“I looked over those three schools and I asked myself what school would give me the best chance to be a difference maker — Ohio State was the one,” Hamilton told Lettermen Row.

“Going into this year, Ty had some stuff going on but nothing huge,” Day said. “When you look at what DaVon did, first off, that’s kind of the model. But Larry Johnson saw something in him in camp this year that he really liked and then all of a sudden he had a great year. He was kind of terrorizing every team he played. Played big, played strong, and I think he’s got a chance to be really good.

“He probably has a chance to have a bigger impact early on in the career than we maybe thought going into the season. Between he and DaVon, they really had great seasons.”