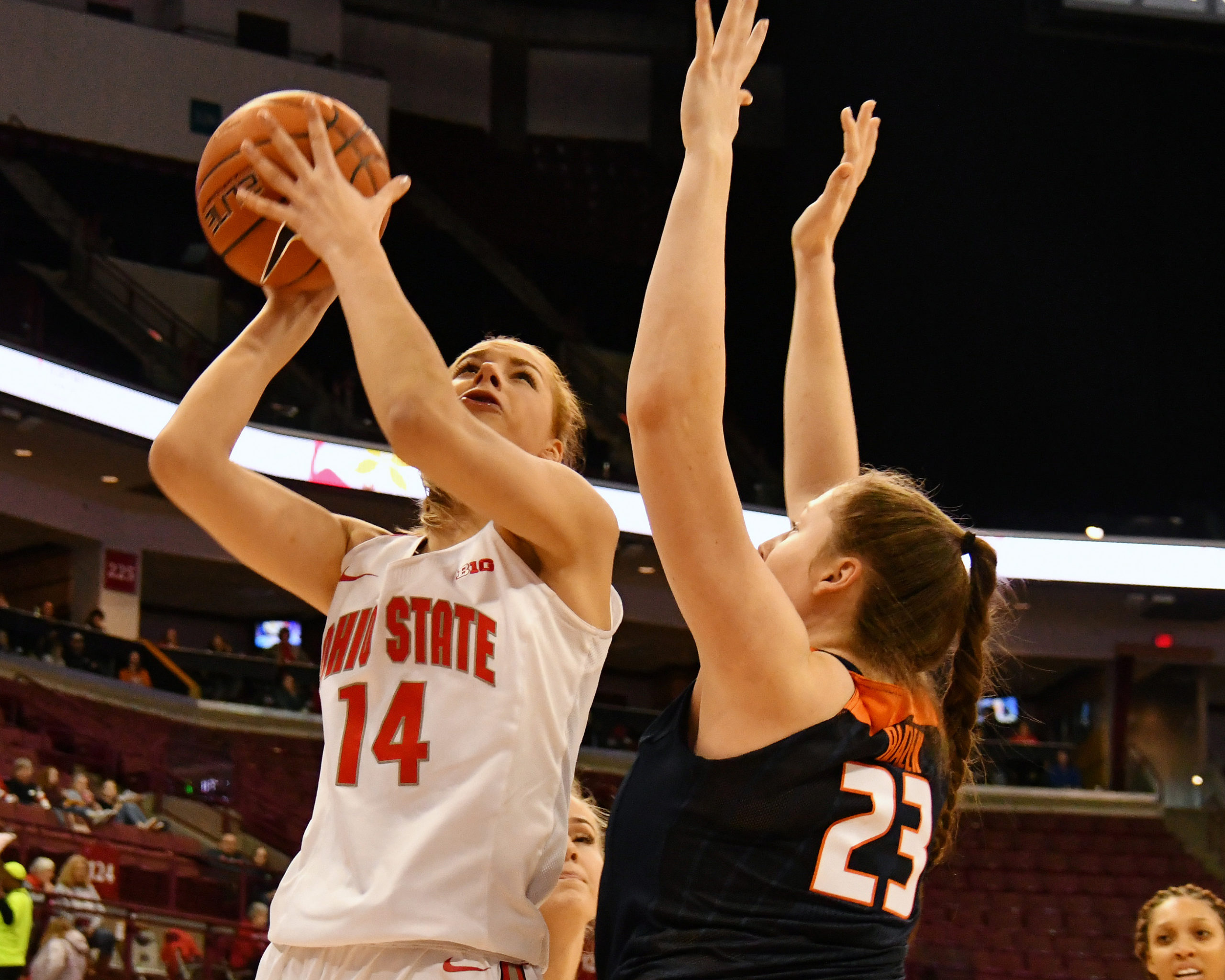 Halfway through the third quarter, Ohio State and Illinois found themselves in almost the exact same situation as last time.

“It was weird. Same thing as last time, they played well and we were kind of going back and forth, and then finally we just kind of broke away late,” Ohio State head coach Kevin McGuff said. “It was probably a little bit of a closer game than the final score indicated, but just happy we got going.”

After going down by one midway through the third, the Buckeyes immediately went on an 8-0 run and eventually led by seven heading into the fourth.

But the Illini did not go down without a fight, scoring five straight to start the final frame to make it a 52-50 game. Still, one variable remained the same: Kierstan Bell.

The Ohio State freshman guard hit a pair of threes 40 seconds apart to put the Buckeyes up eight, and then a fellow freshman guard, Jacy Sheldon, buried another to give Ohio State an 11-point lead that would never be in doubt.

En route to the 20-point win, the Buckeyes scored 15 of the final 19 points, and outscored Illinois 26-13 in the fourth quarter.

The scoring was pretty even throughout the lineup for the Buckeyes, with five players finishing in double figures. Sophomore forwards Dorka Juhasz and Aaliyah Patty led the way finishing with 13 points apiece, while adding 11 total rebounds. Juhasz shot 4 of 5 from the field, while Patty hit 6 of her 7 attempts.

McGuff said a lot of the success had to do with an improved ball movement on the offensive side of the court.

“I thought tonight we really moved the ball well,” McGuff said. “They played a lot of zone, our ball movement was really good, we were making the extra pass, I think we had 19 assists which is indicative of how well we were moving ourselves and the ball versus their zone.”

Bell was less efficient, making 4 of her 14 shots, but she finished with 12 points and seven rebounds and made all of her offense from behind the arc.

The duo was a perfect 7 of 7 from the field, while the rest of the team was a combined 6-of-19 shooting.

Senior guard Brandi Beasley kept the Illini in it after 20 minutes with 13 points on 5-of-8 shooting, including 3 of 6 from three.

The Buckeyes only dressed eight players for the game against the Illini, and will likely only be dressing nine for the near future. Freshman guard Kaelynn Satterfield entered the transfer portal prior to the game and freshman forward Aixa Wone missed the game due to personal reasons.

“We’ve had discussions throughout the year,” McGuff said on Satterfield. “She’s a great kid, I enjoyed getting to know her and having her. I just think she’s looking for, maybe an opportunity to have a little more impact on the court, and I’m sure she’ll find it.

“She’s a really good player and I’m wishing her all the best.”

And on Wone, McGuff said there is no immediate timetable on when he expects her back in the lineup.

“No, but hopefully sooner rather than later.”

Ohio State comes back home Sunday to take on Wisconsin at 2 p.m.