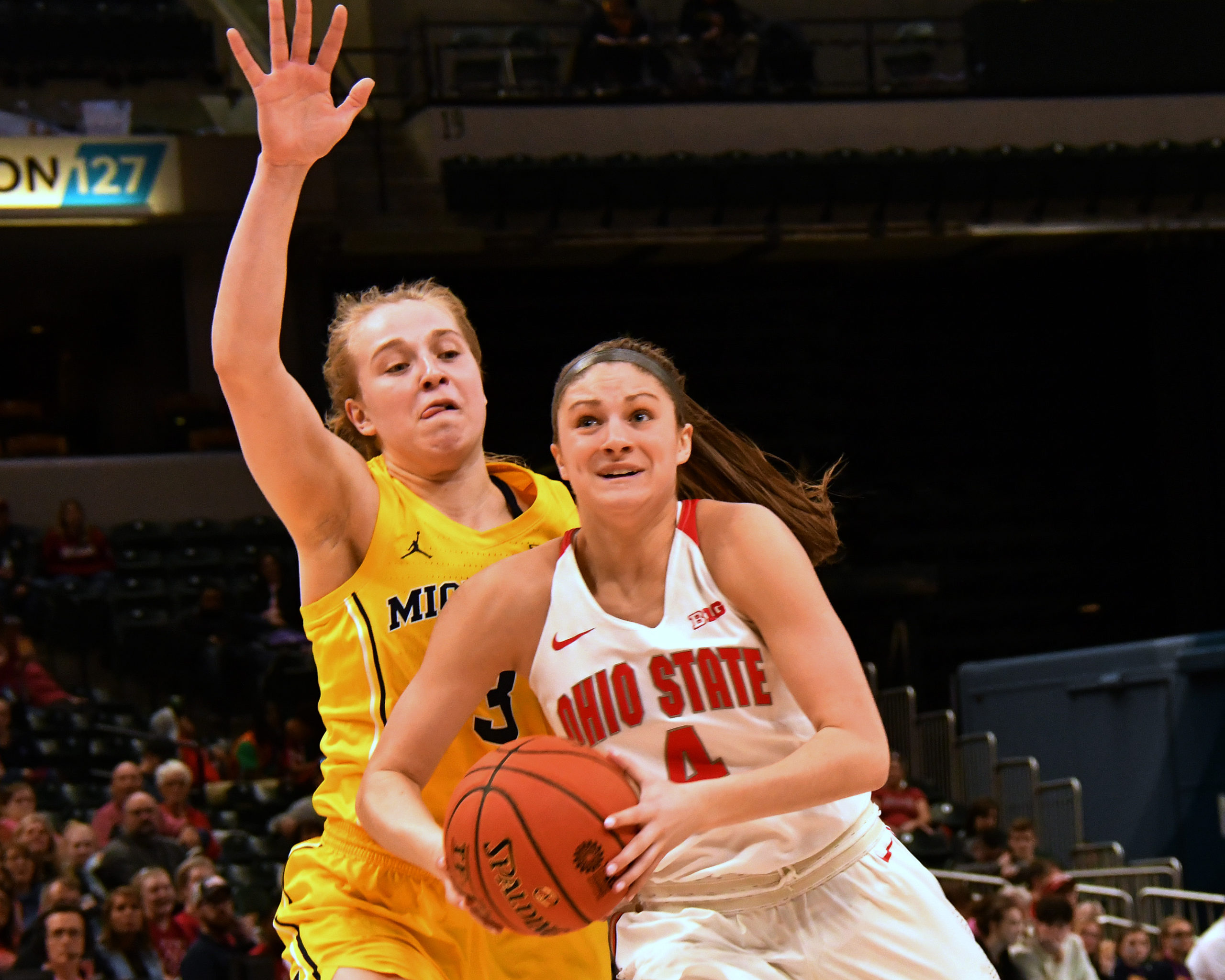 Ohio State came in the winner of three straight 21-point blowouts, but the same could not be said about its Big Ten tournament semifinal matchup against Michigan.

The six-seeded Buckeyes had an 11-point lead late in the third quarter evaporate from a 14-3 Wolverines run at the end of the frame and to start the fourth quarter.

And in that fourth quarter, Ohio State held Michigan scoreless for the next 3:09 and without a field goal for the next 4:38, using defense to grind out a 66-60 win and advance to the Big Ten tournament championship game.

“I was really proud of their poise,” head coach Kevin McGuff said. “We made a lot of great plays on both ends and floor down the stretch, and it just shows how much we’ve grown as a team.”

A steal and eurostep layup by freshman guard Jacy Sheldon ended the lengthy Michigan run and put Ohio State back up two points. That sparked a 12-4 run, giving the Buckeyes a 58-50 lead.

But the Wolverines fought back with five unanswered to bring it back to a one-possession game, but Madison Greene came through in a big way for Ohio State.

The freshman guard hit a difficult contested layup with 35 seconds remaining to make it a five-point game, and then hit two key free throws to officially ice the game.

Sheldon stole a Michigan inbound and hit a layup with 5.3 seconds left for good measure, officially sending Ohio State to the title game to face off against top-seeded Maryland.

Greene finished the game with a team-high 13 points and was a perfect 7 of 7 from the free-throw line, while Sheldon added 11 on 5-of-7 shooting.

“I just had to take care of the ball, do what a point guard does and I feel like did my job,” Greene said. “I may not have scored with the threes or lay-ups, but I contributed with the free throws at the end, which were very important. I’m just glad my teammates believed in me, got me the ball, and I’m just blessed to make them.”

The Buckeyes took a 32-26 lead into halftime thanks to a variety of scoring all the way down their roster. Sophomore guard Janai Crooms led with eight points, including six straight to start the second quarter.

Though they were down, Michigan sophomore forward Naz Hillmon had a dominant first half scoring 13 of her team’s 26 points to go with eight rebounds.

Hillmon remained a force down low all night, ending with 22 points and 16 rebounds.

“We certainly had to pay attention to Naz Hillmon. She was outstanding tonight and she’s so hard to guard,” McGuff said. “A lot of our conversations were trying to keep the ball out of her hands, which is very difficult to do, and then keeping her off the glass. She’s a great player and showed that again tonight.”

Five players ended the night in double figures for Ohio State, and six players ended with scoring totals between eight and 13 points, showing the balance of the offense in the victory.

“I think what helps us is our depth. I think we all contribute in some type of way,” Crooms said.  “I think if we just keep that going, I think we’re going to do really successful things.”

The first half was mainly headlined by runs from both teams. Ohio State opened with the first four points of the game, but Michigan responded with a 7-0 run to take the early lead. In the second quarter with the teams tied, the Buckeyes went on a 10-0 run to take a 28-18 lead, only for the Wolverines to answer with six straight of their own.

Ohio State will play the Terrapins in the final at 6 p.m. Sunday.