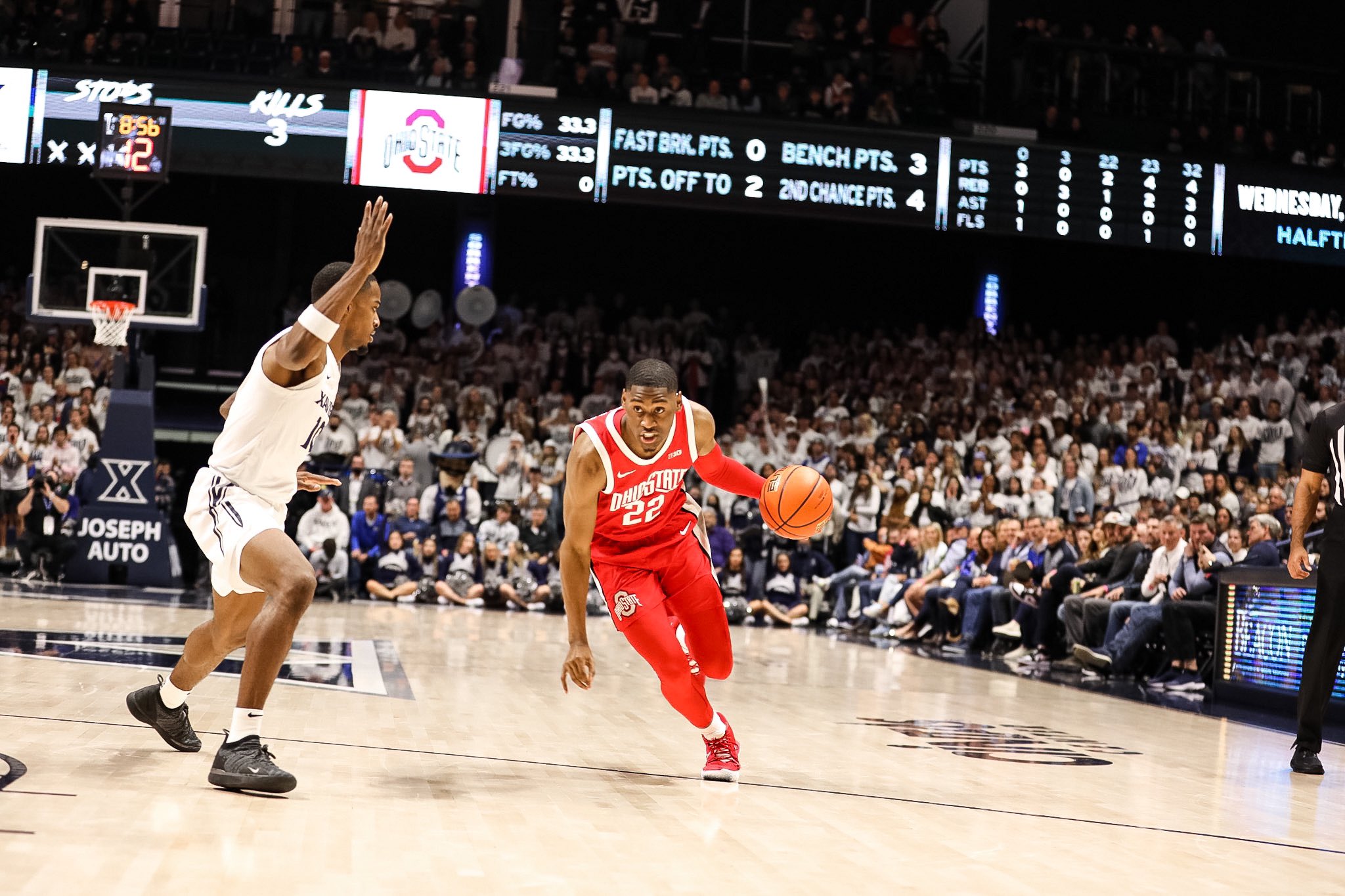 Ohio State wasn’t especially good at hiding its jitters to open its first matchup of the season against a high-major opponent – although the high-energy crowd of the Cintas Center at Xavier University has a way of shining the spotlight on visiting squads that aren’t quite locked in. Against the Musketeers on Nov. 18, OSU looked every bit like a team playing its first road game of the season, opening the defensive lapses and shaky offense, scoring only two points in the first four-plus minutes of play.

Thankfully for the rattled Buckeyes, their opponents weren’t much cleaner to open the Gavitt Games battle between the Ohio pair. A pair of turnovers and a missed dunk kept Xavier from taking advantage of that slow start, scoring only six points of its own before the opening TV timeout.

The Ohio State offense, led by the second-year duo of Meechie Johnson Jr. and Zed Key, would rebound, but the defense – save for Liddell, who had six first-half blocks – never really did on the way to the first loss of the season for Holtmann’s squad, 71-65. Be it through missed assignments, slow close-outs, poor rebounding or even an especially challenging sequence that saw Eugene Brown III nabbed a Xavier pass, broke down the court and dealt to Malaki Branham, who immediately gave the ball back to Xavier with a bad bounce pass.

The Musketeer offense wasn’t particularly potent to open the game, shooting just 33.3 percent in the first half, but Ohio State’s struggles in finishing off defensive possessions – and nine turnovers on the other side of the court gave Xavier a 35-26 halftime edge.

Ohio State opened the second frame of play with signs of life, finding a 9-3 run to answer a pair of Xavier free throws and cutting the deficit to five, 40-35, but Xavier was again ready with a response, scoring six straight to answer the Buckeye spurt and push the lead back to 11. A trio of Ahrens free throws and Young’s first three-pointer of the season pulled Ohio State back into the pictures, but as it was in the first half, it just never seemed that the Buckeyes could string together enough good possessions on both sides of the floor to make a dent.

The closest Holtmann’s squad would get was three, at 57-54 with 3:29 to play after a pair of big-time Johnson baskets. A Jack Nunge expanded the Xavier lead back to five (where it sat for much of the half) and though Liddell hit a layup to bring the difference back to three, Paul Scruggs and Nunge added four more points for XU to move back in front by seven points with less than two minutes to play.

Staring that down, Johnson delivered again for the Buckeyes, hitting Young on a backdoor pass to set up an and-one opportunity, which Young would cash in on.

A possession later, after another Scruggs bucket to answer Young’s layup, Liddell knocked down his first triple of the game to move the Buckeyes back within a possession, 65-62. Wheeler cut the deficit down to two with a three of his own to answer another Scruggs bucket, but unlike the last time these two played, Ohio State wouldn’t get chance at a game-tying bucket.

Scruggs hit a pair from the line, the Buckeye offense finally faltered, and two more Xavier free throws put the finishing touches on a 3-0 start for Travis Steele’s squad, and the third win for a Big East group over a ranked Big Ten foe on the season.