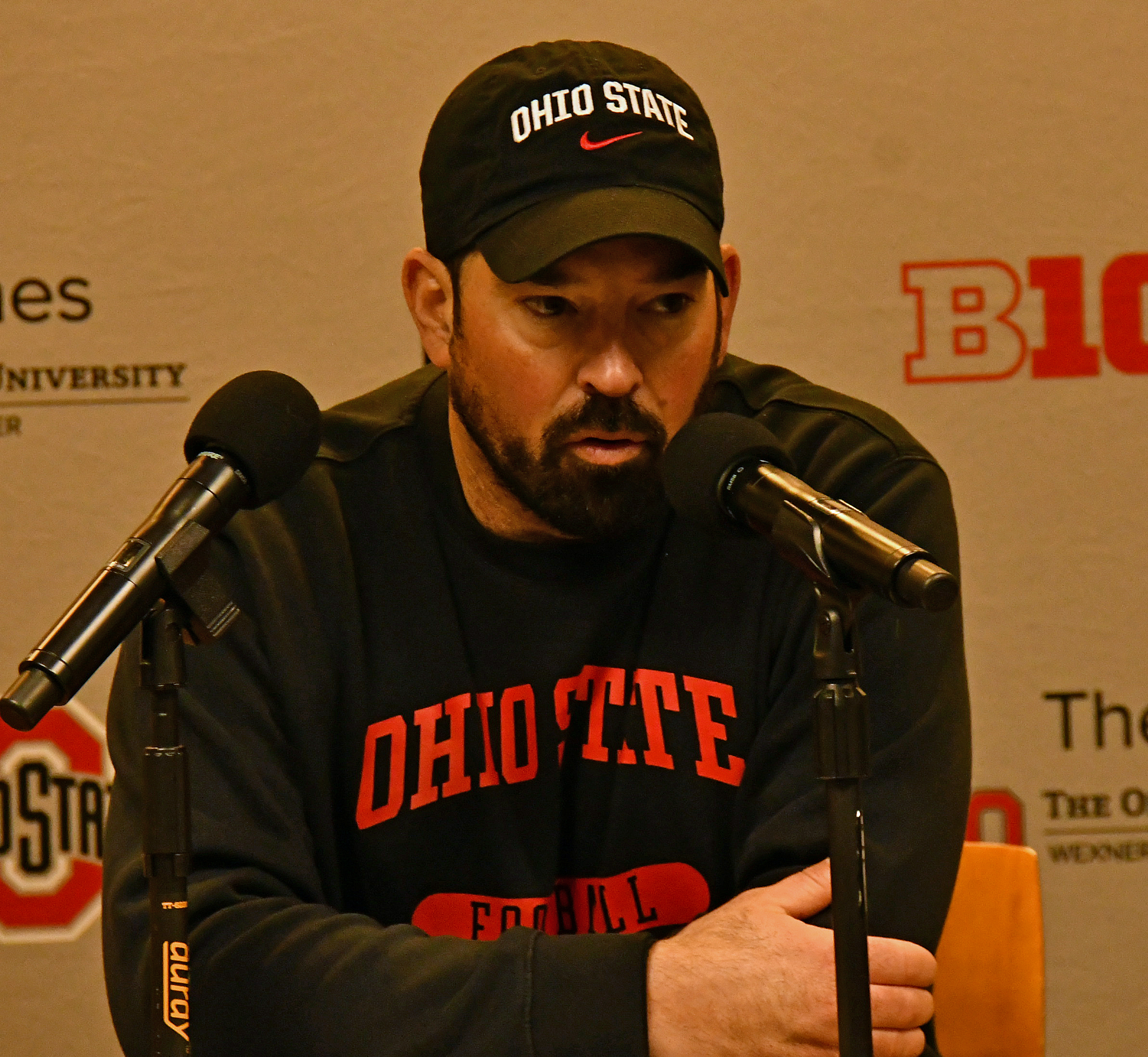 Ohio State head coach Ryan Day ented the Team Room at the Woody Hayes Athletic Center on Sunday afternoon with a tired yet resilient look on his face.

The Buckeyes learned they would finish No. 6 in the College Football Playoff rankings behind Alabama, Michigan, Georgia, Cincinnati and Notre Dame only hours before the press conference, leaving them out of the four-team tournament for the first time in Day’s tenure.

According to Day, Ohio State failed its mission of reaching the CFP and therefore squandered its hopes of winning a national title. Still, the Buckeyes season has one game remaining — a matchup with Utah in the “Granddaddy of Them All” — and the third-year head coach would tell you the Rose Bowl carries significant weight in the football program.

“The goal that we have here is to win championships, and that’s a goal that we have year in and year out, and we didn’t reach that goal,” Day said Sunday. “However, we have an opportunity to go play in a tradition-rich Rose Bowl, and that means a lot. It’s a New Year’s Six Bowl and the 16th time I believe Ohio State’s been in the Rose Bowl. So there’s a lot of tradition that’s led up to that, and I know our guys are gonna want to play hard and win that game.”

Ohio State is still experiencing the weight of its loss to Michigan in the final regular-season game, and Day doesn’t expect that feeling to go away any time soon. He said multiple times during his press conference that it’s been a tough week for the Buckeyes after losing to their storied rival for the first time in a decade.

“The rivalry game is the rivalry game for a reason. It means a lot to a lot of people. So when you don’t win, there’s a tremendous amount of pain, and nobody knows that more than the players and the coaches here,” Day said. “It’s hard to swallow. You can’t just move on after one day. It doesn’t work that way. Like I said in the postgame press conference, it’s gonna leave a mark and we knew that, and it’s gonna hurt for a while.

“I don’t think that any of us have experienced this before. I know I haven’t experienced it, and this school hasn’t experienced this in a long time. It’s a hard pill to swallow. We’re gonna have to obviously take accountability for everything that happened and move forward. But that doesn’t mean it’s easy.”

Day believes his team will regroup after the devastating loss. He affirmed that it is alright to become emotional about falling to Michigan, but thinks his program will need to leave those feelings behind when the Buckeyes return to practice on Friday.

“You can only feel sorry for yourself for so long,” Day said. “I think everyone’s hurting from the last game. This is an opportunity to kind of change that feeling a little bit.”

The Utes will be making their first-ever Rose Bowl appearance after defeating Oregon and winning their first-ever Pac-12 championship on Friday. Utah head coach Kyle Whittingham, who is in his 17th season with the program, is the longest-tenured head coach in the conference and third-longest at the same school in the FBS. He said on Sunday that his team is “elated” to be going to Pasadena, Calif., and square off with Ohio State.

“We’re really looking forward to it,” Whittingham said. “The entire Salt Lake community, we’ll travel well. It’s something that the community is very fired up about … all our guys are excited about it, and it’s going to be a great experience for our players.”

Because the Rose Bowl isn’t a playoff game, one of the biggest questions for the Buckeyes is whether all of their NFL Draft-eligible players will play in the game. Numerous student-athletes will have reason to consider whether playing one more Ohio State football game is worth the risk of injury less than four months before the professional teams select players.

Day said there hadn’t been any Buckeyes who indicated they wouldn’t play in the game, and he expects each player to be ready for the New Year’s Day bout with Utah.

“We’ll deal with that on an individual basis based on how all it shakes out, but right now, counting on everybody to play in the game,” Day said.

Ohio State might have failed in its goal to win a national championship, but Day has no less pride in his team for their performance throughout the 2021-22 season. This year’s goal changed after Sunday’s CFP Selection Day for Day and his team. Now the Buckeyes’ primary objective is to beat Utah.

“I think all of our guys have a lot of pride in themselves and a lot of pride in this team, and there’s been a lot of hard work and a lot of progress that was made all year before we started this thing. So we want to finish this thing the right way,” Day said. “And that’s really what the focus is on right now. I think there’s a lot of lessons that have been learned from the last game, and that will obviously motivate us moving forward. But right now, the focus is on this Rose Bowl and sending out the seniors in the right way, and I know everybody in the program wants to do that.

“I think our guys are very, very competitive, and they take a lot of pride in who they are and this team. So we’re gonna get right to work here this week and start grinding toward it and move forward to the game and play really good in the game.”