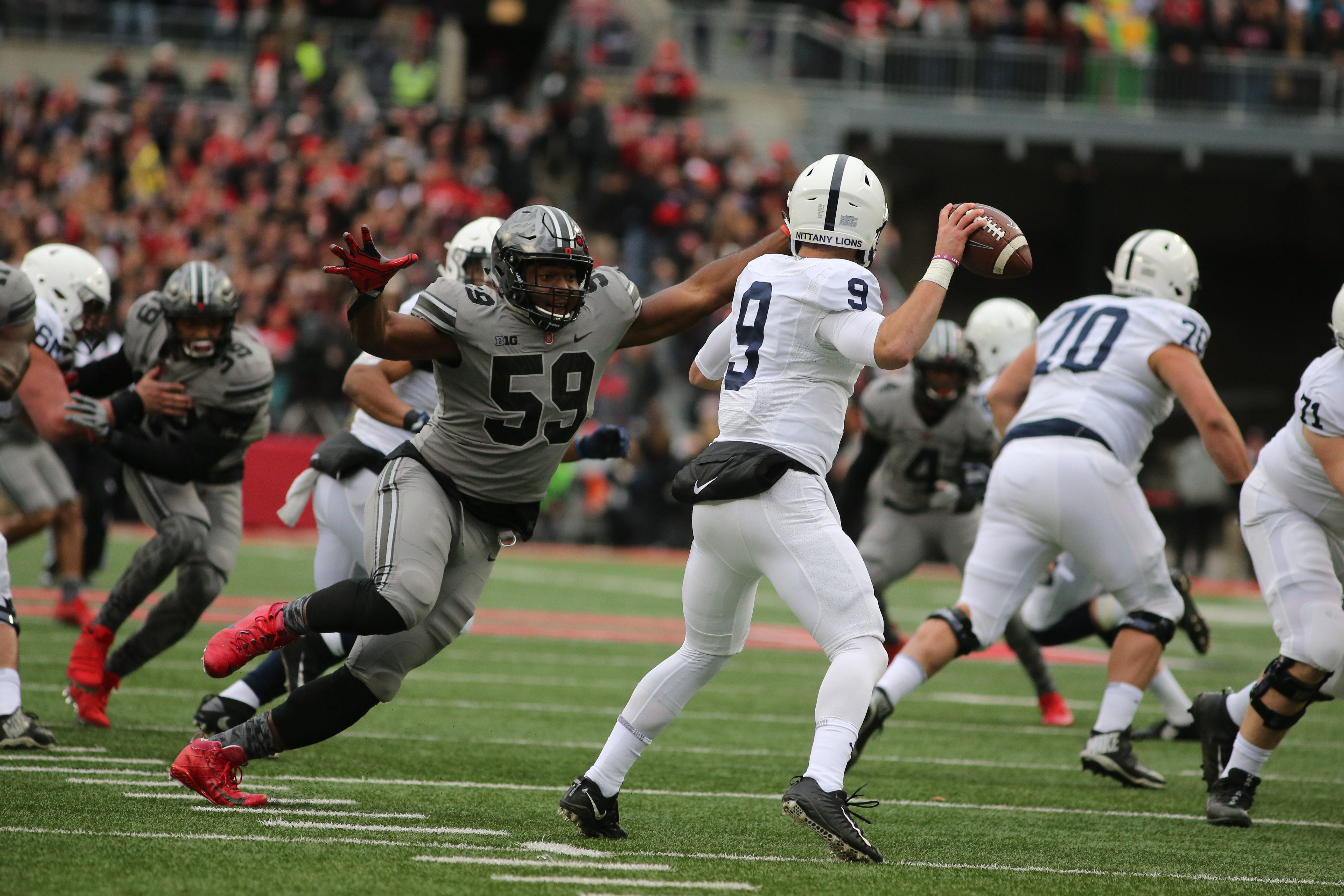 Ever since Penn State upset Ohio State in Happy Valley two years ago, the Nittany Lions offense has been a force to be reckoned with. That isn’t any different this year, as PSU boasts the No. 1 offense in the Big Ten, averaging 55.5 points per contest through four games.

Even with a new play caller, the Penn State offense looks very similar in 2018. Quarterback Trace McSorley still operates the Nittany Lions run-pass option (RPO) attack with precision. The RPO offense features plays where the quarterback reads one or two designated players, and either runs or executes a quick throw off of that defensive players action.

A prime example of Penn State’s RPO offense can be seen below.

In this particular play from the 2016 contest, McSorley is reading linebacker Raekwon McMillan, instead of the traditional zone-read in which the quarterback often reads the defensive end.

If McMillan sinks into coverage, then McSorley gives the ball to Saquon Barkley on an inverted veer option play. You will notice the left guard pulling around and the defensive end (Tyquan Lewis) crashing inside. If McMillan would have stayed in coverage, Barkley would have run a “sweep” play on the perimeter.

Instead, McMillan comes up on the run fake, which leaves the tight end open in behind him for a wide open first down. This is one of many staples in the Penn State offense, and something linebacker Pete Werner said the Buckeyes are preparing for.

“With RPOs, it is assignment football,” he said. “Each linebacker has a certain job, so I will fit in the right spot when I need to.”

Werner’s position, outside linebacker, is often the position that gets read by the QB in RPO scenarios. On the play below from the 2017 matchup, it was Dante Booker that McSorley was reading off of. Booker came up on the run action and McSorley kept the ball and completed a dangerous throw to his outside receiver.

In fact, both Booker and Chris Worley come up on the run action and the slot receiver (No. 5) is open on a slant. It would have been an easier completion for McSorley on this particular play and with the free safety (Jordan Fuller) flying to the middle of the field, might have even been a touchdown.

With certain players being singled out in RPO offenses, co-defensive coordinator Alex Grinch said it is critical for each individual player on the defense to be sound in his assignment because one player can make or break the play.

“There has to be an understanding on the back-end if there is a route, cover the route. That is a simplistic way to say it, but the reality is there are multiple plays on any given down that you have to defend,” Grinch said. “What that does, is it flattens you out defensively. You have individuals responsible for the quarterback and the running back. When I say ‘individuals,’ sometimes it’s an individual guy. In that moment, if you think you’re needed, believe me, you are.”