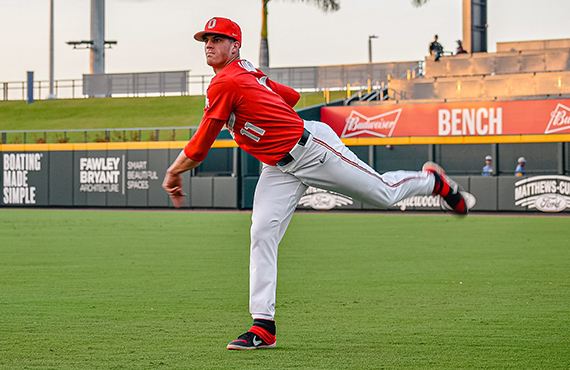 According to a report from Press Pros Magazine, Ohio State sophomore pitcher Seth Lonsway has opted to return to school after going unselected in last week’s MLB Draft.

Though a transcript issue forced Lonsway to redshirt during his first season in Columbus, he made an immediate impact with the Buckeyes when he regained his eligibility. He struck out a Big Ten-best 126 batters in 2019, including six in Ohio State’s team one-hitter of Michigan on the way to a Big Ten tournament title.

The left-hander appeared in just four games during the 2020 season before it was cancelled in mid-March due to the coronavirus pandemic. He posted a 1-2 record with 42 strikeouts and just 18 walks over 18 innings to that point.

Typically 40 rounds, this year’s draft was just five rounds thanks to the pandemic and the labor dispute between the players and owners. The Buckeyes saw catcher Dillon Dingler drafted in the second round by the Detroit Tigers, while Lonsway surprisingly did not hear his name called.

Lonsway could have signed a deal as an undrafted free agent beginning Sunday, but Ohio State head coach Greg Beals said his star pitcher entered the draft with hopes of landing a $1 million signing bonus. The maximum amount teams can offer undrafted players is $20,000, meanwhile.

“We’ve been in constant contact throughout this process,’” Beals said. “It was the inability to come to terms with a team. He’s coming back to us and will be in a Buckeye uniform. He still has dreams of pitching in the big leagues.”

Lonsway was considered by MLB.com to be the 50th-best prospect in the draft, while Keith Law of The Athletic pegged him as the No. 97 player overall. His return to Columbus will likely only improve his stock.