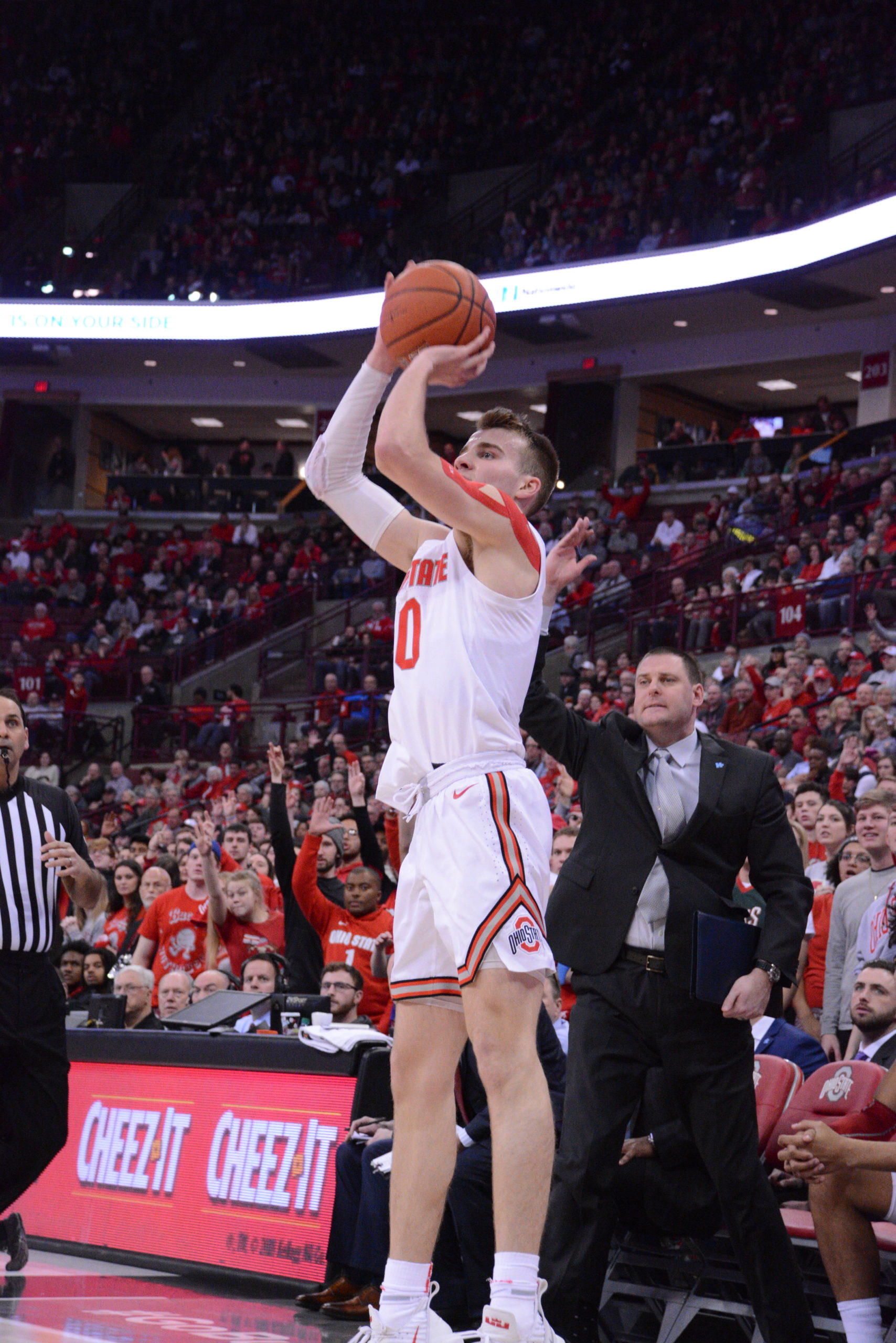 Additionally, we will analyze his place on the team ahead of the 2020-21 campaign. Next in the series is wing Justin Ahrens.

After leading Ohio State’s rotation players in three-point shooting as a freshman, Justin Ahrens ranked third on the team in 2019-20.

Despite the fact that Kaleb and Andre Wesson shot better from deep than him, Ahrens still improved his three-point stoke to 40.4 percent from 38.8 percent the year before.

After only attempting 12 two-point shots as a freshman, Ahrens became even more three-point specific with a mere five attempts coming from inside the arc. The Versailles, Ohio, native shot 41.9 (26 of 62) from the field and 40.4 percent (23 of 57) from three-point range as a sophomore, averaging 2.9 points and 1.3 rebounds in 10.0 minutes per game.

Though there was not a statistical jump from Ahrens’ first to second season in scarlet and gray, the 6-foot-6 wing showed improvement in his decision making and defense.

The former Versailles standout stepped up his effort and attention to detail as a second-year player, helping build head coach Chris Holmann’s confidence in him.

The season was cut short due to COVID-19, but Ahrens had been building toward a strong finish to his sophomore campaign. From Jan. 14 to Feb. 15, Ahrens knocked down 61.9 percent (13 of 21) of his three-point attempts while helping the Buckeyes go 6-2 during that stretch with notable wins against Michigan and Purdue.

Against Northwestern on Jan. 26, Ahrens displayed his improved IQ and proved to be ready when the ball came his way. After E.J. Liddell was shut down in the paint, he kicked it out to C.J. Walker on the wing. While Liddell’s pass was traveling to Walker, Ahrens began to side step to his right, creating space between him and Walker, allowing the point guard to find Ahrens for a wide-open three-pointer to cut the Wildcats early lead to 15-14 with 10:35 left in the first half.

The left-handed shooter showed more savvy against Northwestern with excellent off-ball movement as well as a superb shot fake into a three-pointer off a rhythm dribble. With under eight minutes (7:56) to play and the Buckeyes trailing 19-16, Ahrens spaced the right side of the floor off a high pick and roll. Walker found Ahrens open in the corner, but a Wildcat defender attacked Ahrens with a hard closeout. Instead of rushing up a quick shot, Ahrens calmly faked a shot, took a left-handed dribble on a side step, and buried the game-tying three-pointer.

Ahrens continued to show his improved patience in Evanston, Ill., operating a flawless give-and-go with DJ Carton in transition while holding a 49-46 lead with 11:50 to play. Carton initially finds Ahrens on the left wing for what would have been a decent look for three. Instead of hoisting a quick shot, Ahrens swung the ball back to Carton and relocated to the corner. The defense over-adjusted when Carton drove the lane, and the point guard found Ahrens for a wide-open triple in the corner for a six-point lead.

Not only did Ahrens display a heightened basketball IQ against the Wildcats, he also showed improved effort. After Carton broke out in transition with his dangerous speed, it would have been easy for Ahrens to stay back on the other end and watch the point guard attack. Instead, Ahrens sprinted the floor behind Carton, and when Carton kicked the ball out to Walker on the wing, Ahrens arrived behind the arc for another three-pointer, marking his fourth of the game.

In the Buckeyes next game against Indiana on Feb. 1, Ahrens showcased his ability to knock down three-pointers despite everyone in the gym knowing the ball was going to him.

Ahrens first knockdown from deep came in transition when Walker drove into the paint and found Ahrens, who filled his lane excellently, in the corner. The triple from Ahrens gave Ohio State a 55-40 lead with 8:34 left.

Ahrens’ next triple showed his ability to move off the ball and use screens. The slippery wing came off staggered screens from Liddell and Kaleb Wesson before catching a pass from Luther Muhammad well beyond the arc. Nailing that three-pointer extended the lead to 58-40 with 7:59 remaining.

For his third triple of the night, Ahrens demonstrated how he can hit his shot over defenders once he heats up. Ahrens was not even open when he caught a pass from Kaleb Wesson on the wing, yet the smooth-shooting lefty rose up and drilled the three-pointer in his defender’s eye for a 61-42 Ohio State advantage with 6:06 left in the game.

Ahrens is the purest shooter on Ohio State, and his consistency will be key for the team moving forward, especially after the departure of both Wessons.

Having solid floor spacing is essential to Holtmann’s offensive schemes, and a team cannot have respectable spacing without shooting threats from the outside. Ahrens will need to continue to demand the attention of opposing defenses.

While Ahrens most important role will likely always be his shooting, which is his obvious strength, how he improves in other areas of his game will most probably affect his playing time.

In 2019-20, Holtmann mentioned how Ahrens could see more playing time if he elevated his performance defensively. While an offseason back injury hindered Ahrens’ progress between his freshman and sophomore seasons, he should be able to make strides in that area since he is now healthy.

Ahrens improved his effort and IQ on defense as a sophomore, so those areas should not hold him back moving forward, but he will still have to prove he can sit down and defend on the perimeter.

Improving on defense will be the most critical component to Ahrens earning more minutes, but his shooting will still be his most important asset. Outside of Ahrens, the Buckeyes’ top returning three-point shooters from 2019-20 are Duane Washington Jr. at 39.3 percent and Walker at 32.1 percent. Ahrens, Washington Jr., and Walker are the only returning players who shot above 19.2 percent from three for Ohio State last season.

By continuing to improve his defense and finding creative ways to get open from deep, Ahrens can carve out a bigger role for the Buckeyes moving forward. His consistency from deep could end up being a pivotal part of Ohio State’s push for the postseason as a junior.