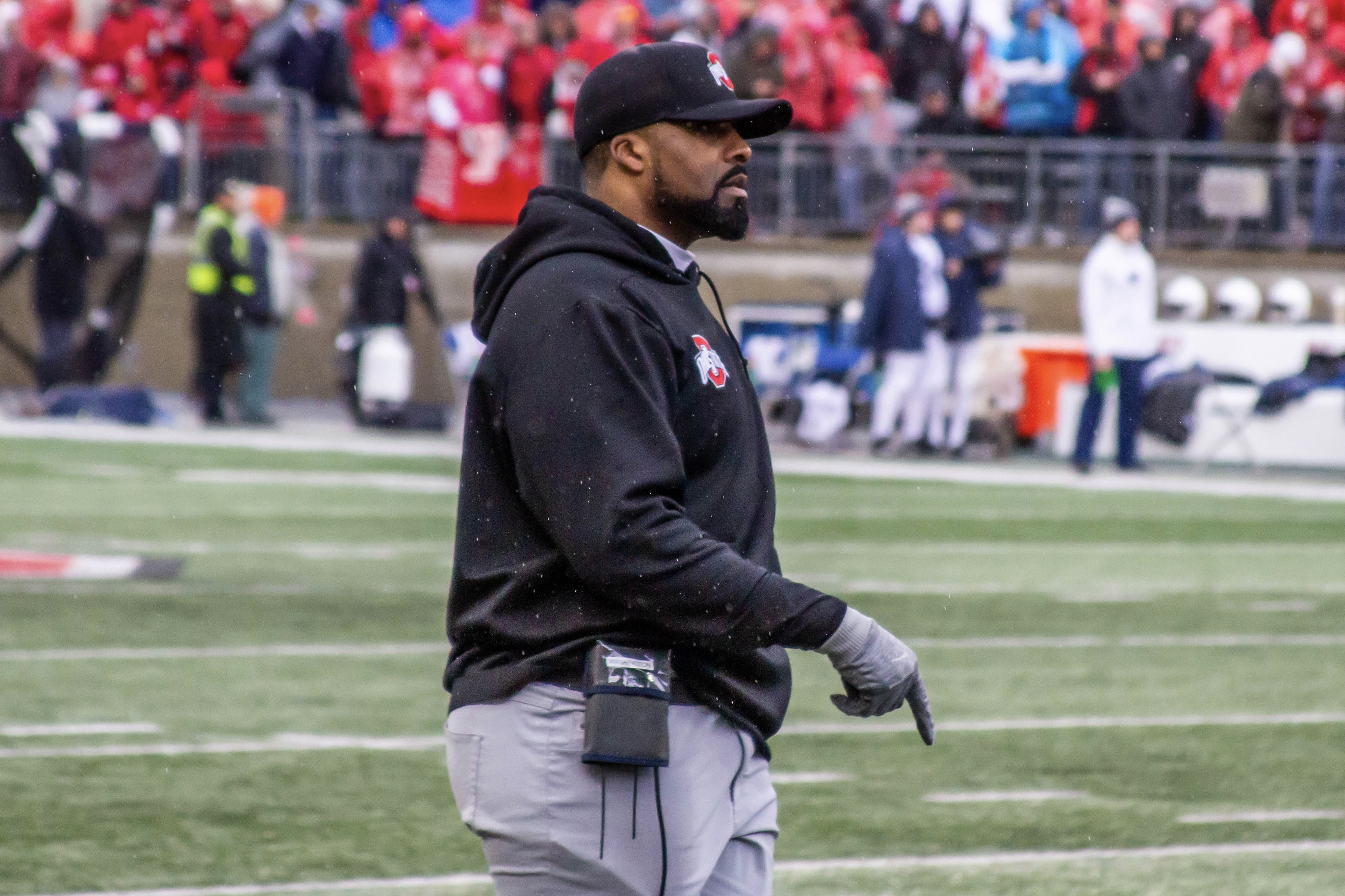 Despite a rapidly dwindling number of scholarship linebackers – a number that shrunk by two in September when both Dallas Gant and K’Vaughan Pope announced their intentions to transfer with varying levels of showmanship – Ohio State linebackers coach Al Washington declined to say that he’s concerned about his room on Oct. 19.

How is that, when the Buckeyes have four established contributors in senior Teradja Mitchell and sophomore trio Steele Chambers, Tommy Eichenberg and Cody Simon; two question marks in transfer Palaie Gaoteote IV and freshman Reid Carrico and one long-term injury case in sophomore Mitchell Melton as the seven scholarship linebackers remaining in Columbus. It comes back to quality, in Washington’s estimation.

“You’d like to bolster yourself as much as you can, but to say that I’m concerned and worried, I can’t say that,” Washington said. “Who we have I feel real strong about, and it’s just been a daily deal where we have to continue to grind away and improve and that’s what our mentality is. I feel very excited about those guys and very excited about the direction they’re headed.”

Improvement within that top four has been crucial for Washington’s comfort, especially in the days and weeks after Gant’s quiet departure and Pope’s public and noisy split. After Ohio State’s loss to Oregon, the linebacker room was the first group on the chopping block in the public square, but Washington said that he’s seen significant improvement in the weeks since, specifically from Chambers, but all around that top group. Still, he was quick to note that there’s no such thing as true comfort in college football and that the improvement needs to continue as the season progresses.

“The perception may have been one thing,” Washington said of his room. “The reality is, I think understanding the foundation of the room, understanding the reality of everything, we held it together by just staying focused on what was the objective. It’s tough to manage, but we just kept moving forward and continued to focus on what we can do to get better.

“We need to improve, we need to focus on the things we need to control, and that’s been the narrative. It’s never been a negative. We’ve always been positive. We’ve gotta take advantage of the time we have. That’s been our message. And you just have to be persistent in that, you have to know who you are, you have to know what you stand for. And I think those things help in terms of how do we keep it together, because tough times come. The challenging times come. But you have to persist. You have to stick to it. And I believe that.”

Even the pair that didn’t stick for a number of reasons drew no ill will from their coach, who said that he understood their qualms and doesn’t hold their departures against them.

“I got nothing but love for those kids. I spent so much time with them. And I support them as they go forth and do what they need to do,” Washington said. “It’s never easy. And I completely understand their frustration. Both of those two young men are great people and really good players.

“K’Vaughan was frustrated, and I get that. I don’t judge him off that. He’s a great kid. You absolutely look in to say, ‘What led up to this?’ And ultimately, man, at the end of the day, you look at those things, you apply what you learned from the situation and you keep doing the best you can with the decisions you have to make.”

The next step for Washington’s room, beyond the standard improvement, is to find a deeper bench. Carrico has only contributed in small roles early on and seems unlikely to take a significant leap before the end of the season, but Washington said that Gaoteote has seen an increase in practice time as Ohio State works to prepare him for more reps – especially as he comes off of a tumultuous offseason. On that front, the linebacker coach had little to add, beyond the same feeling that he has about his entire room: it’s moving in the right direction.