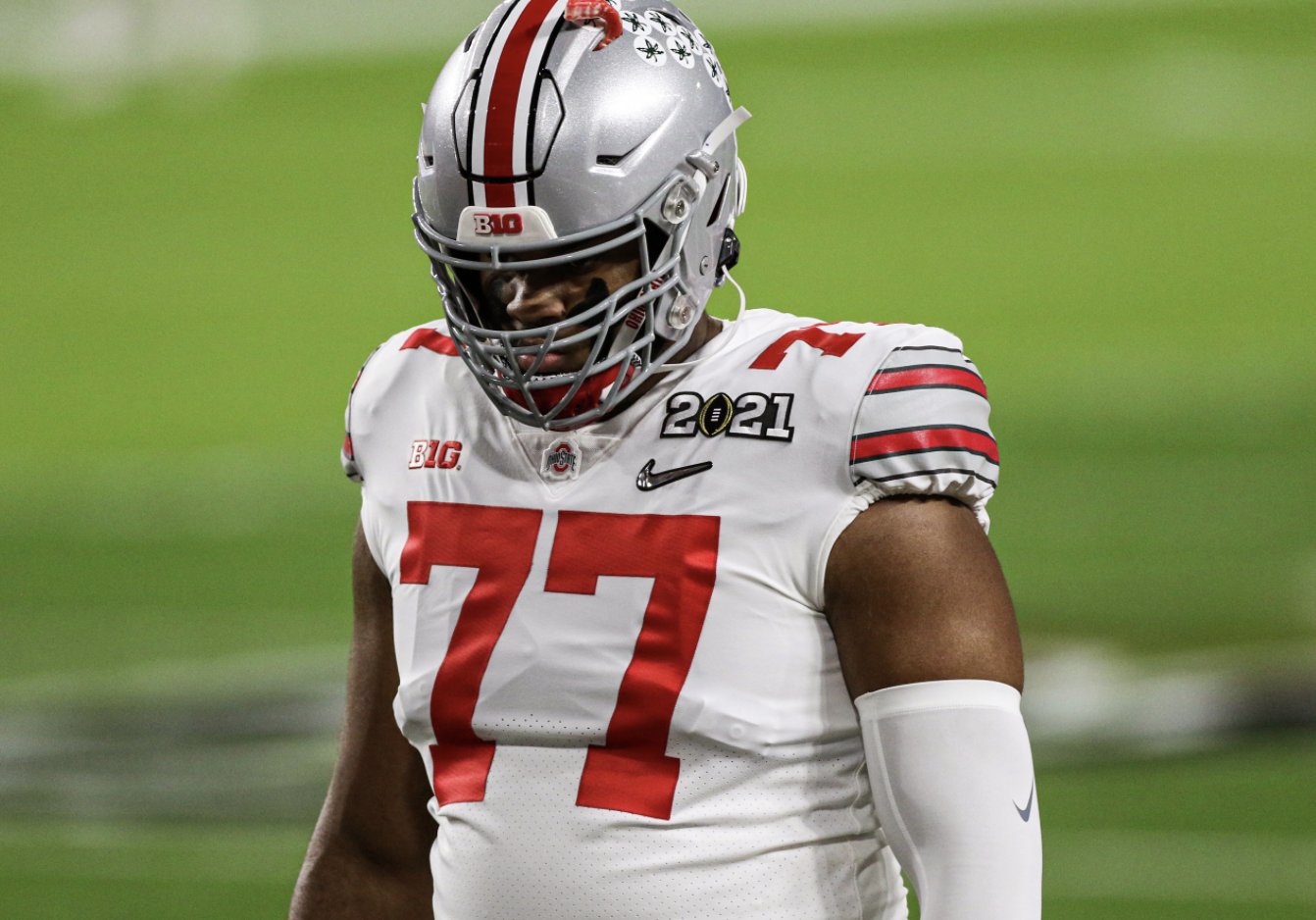 However, not everything has fallen into place on the offensive line. Behind the starting five, who will take the depth positions?

This spring, Harry Miller’s medical retirement, and Josh Fryar’s absence removed the only players who could have competed for a starting spot and cleared up the first five. When Fryar returns in the summer and fall, he could push for a starting guard spot, but it’s more likely that he will operate in the sixth-man role that Matthew Jones occupied for the Buckeyes last season. With another year of development, he should crack the starting lineup in 2023.

Keep in mind that not all two-deeps are actually two-deeps. In this instance, Jakob James is not the No. 2 center. If Wypler were to go down, Matthew Jones would kick over a spot and take over snapping duties, while Fryar could be the second-string lineman at any of the other positions. Enokk Vimahi and James are likely the next two that would fill in after Fryar if the Buckeyes needed someone to fill in.

Johnson was a consensus five-star prospect, the No. 1 tackle and No. 7 overall prospect in the class of 2020. He appeared in five games as a freshman as Ohio State’s sixth-man while rotating at guard. Johnson also saw snaps at the tackle spots. Last season, Johnson started at right guard between Wypler and Dawand Jones.

The Cincinnati native will shift to his natural position of left tackle this season and protect quarterback C.J. Stroud’s blindside. His 6-6, 315-pound frame combined with next-level athleticism should solidify him as one of the top talents at tackle this fall. Many analysts project Johnson will be a high first-round pick in the 2023 NFL Draft if he continues on his path. That shouldn’t be a problem for the former No. 1 tackle as he only improved with each game in an Ohio State uniform.

Jackson was the highest-rated offensive lineman as the No. 1-ranked guard and No. 17 overall player in the class of 2021. Last June, he enrolled at Ohio State with a handful of his classmates to start summer workouts with the program. Jackson worked his way through fall camp and became a backup guard in the rotation.

When the Buckeyes take the field this fall, Jackson will fit the mold at guard. Ohio State attempted a four-tackle offensive line last season, which didn’t work in practice as well as in theory. With Jackson, the team will have a true guard that can fortify the interior line next to Johnson and Wypler.

Wypler started at center last season for the Buckeyes, performing admirably for Stroud and Kyle McCord. He was a top 100 ranked prospect and the No. 1-rated player in New Jersey according to the 247Sports composite rankings. Wypler displayed tremendous versatility in high school and played tackle, guard and center at St. Joseph Regional.

The Montvale, N.J., native will enter his second year in the Buckeye offense with an established relationship with Stroud, who will be a Heisman Trophy favorite for Ohio State under center in 2022. Wypler will have two new teammates beside him in Jackson and Matthew Jones, so he might need some time to acclimate to them after Johnson moved to tackle and Thayer Munford graduated.

Still, in his redshirt sophomore season, Wypler will be a captain for the offensive line, ensuring the Buckeye offense operates efficiently when running and throwing the football.

Matthew Jones has been a much-needed depth piece for the Ohio State offensive line since his redshirt freshman season in 2019. He played in eight games that year as a backup to All-Big Ten guard Jonah Jackson. The following season, Matthew Jones started three times against Michigan State, Clemson and Alabama before rotating as the Buckeyes’ sixth man in 2021.

This fall, Matthew Jones will take over a starting spot on the offensive line as the most experienced lineman of the bunch. The Brooklyn, N.Y., native can position himself at either guard spot, but he will likely find his home between Wypler and Dawand Jones on the right side. The 6-4, 310-pounder won’t look as big as the other Jones, but he will pack a punch with the same intensity. Look for the Jones duo to significantly impact Ohio State in 2022.

Dawand Jones was the most significant benefactor of Munford’s move to guard last season. With Munford at guard, Nicholas Petit-Frere took over the left tackle spot, leaving room for Dawand Jones to slide in at right tackle. In his first full season, the Indianapolis native shined with his run blocking, but he struggled to defend opposing defensive ends when Stroud looked to pass.

Pass blocking can be a challenge for linemen with Dawand Jones’ size. There aren’t many like him, but those who share his physical traits have trouble catching up to pass rushers that can utilize bend and quickness to set the edge.

If Dawand Jones can master pass blocking, he will be a top prospect in the 2023 NFL Draft. In fact, Bleacher Report analyst Ben Sobleski believes he can take that step forward this fall and has the Ohio State lineman as the No. 16 pick in his initial mock draft for next year. Improving his professional stock was Dawand Jones’ goal by choosing to return for a senior season, indicating that he sees pass blocking as a growth area. With four months until football, he has plenty of time to keep building.