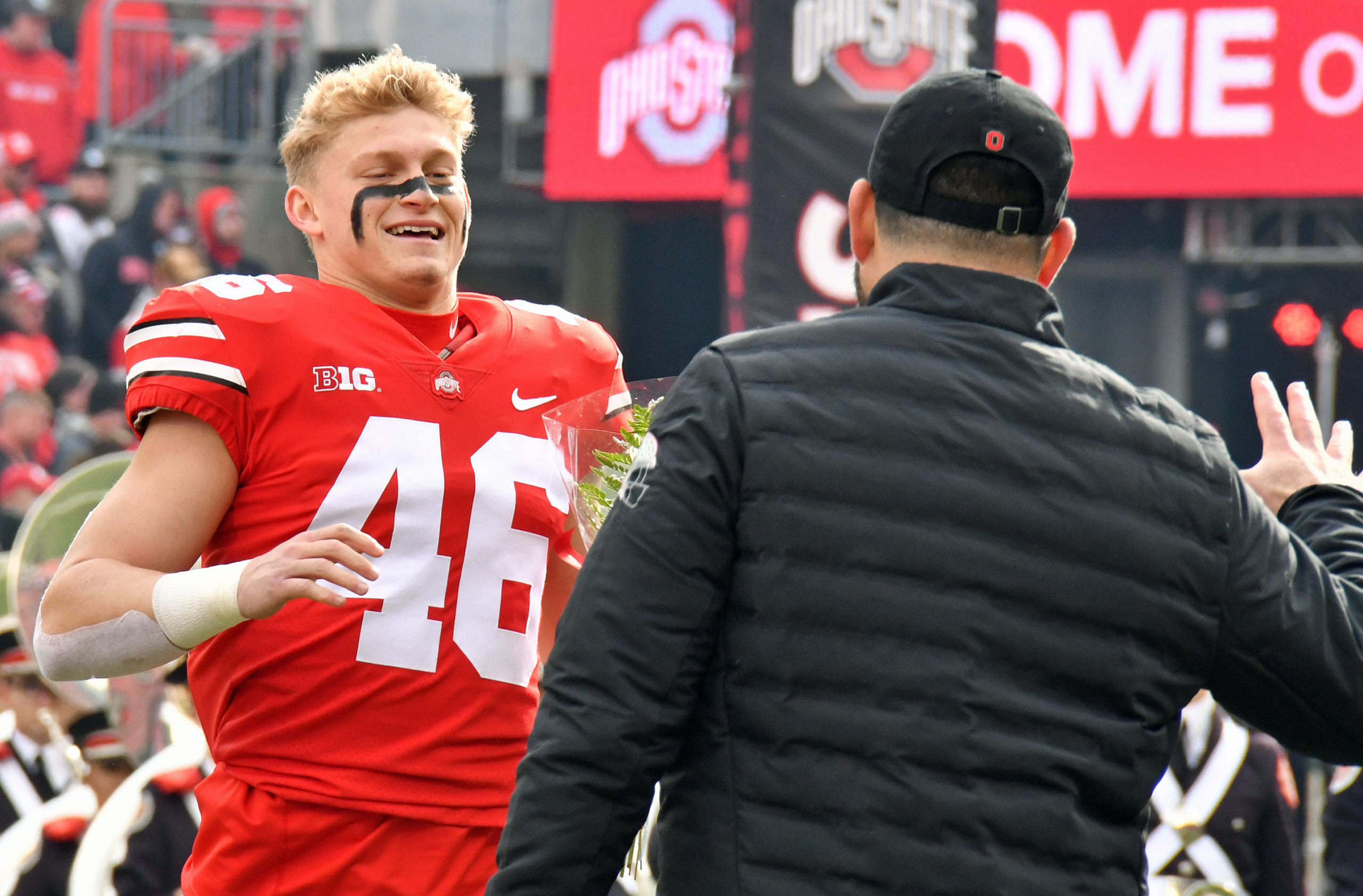 Ohio State’s linebacker room, already depleted after a preseason injury to Mitchell Melton and a pair of in-season transfers from Dallas Gant and K’Vaughan Pope, is going to be down another man against Michigan and for the foreseeable future. Ryan Day confirmed on Tuesday that walk-on linebacker Cade Kacherski, who had been contributing as a reserve and on special teams, will miss significant time with an injury he suffered against Michigan State Nov. 20.

However, fellow linebacker Cody Simon – who suffered an injury early against the Spartans – is expected to be fully recovered in short order.

“Cade, we’ll see. It looks like it’s probably more of a long-term deal,” Day said. “Cody does not look like he’ll be out long-term though.”

With Cade’s injury, Ohio State’s linebacker room now sits with only a handful of tested contributors, and one, Palaie Gaoteote IV, has been on and off the injury list as well throughout the season. Leading the way is converted running back Steele Chambers, who has developed into something of a star as the season has gone on. Alongside him as a starter against MSU was sophomore Tommy Eichenberg after Simon’s injury, with senior Teradja Mitchell contributing only on special teams despite starting the season as one of Ohio State’s top backers.

Barring a serious change in the lineup, Chambers, Eichenberg and Simon look to be the top three for the Buckeyes, with Mitchell, Gaoteote and Ryan Batsch contributing in spot roles as needed.

Ohio State has been able to largely supplement the linebacker position with its bullet and cover safety roles, taking a third linebacker off the field to make room for players like Ronnie Hickman, Kourt Williams or Craig Young, who have rotated through those roles – with the latter two seeing time at LB as well. Holtmann said that Young’s role is largely personnel-based, and with a run-heavy Wolverine squad on the docket, that could mean more time for the 2019 signee.

“Craig is a little bit bigger and gives us more in the run game, based on some of the personnel we were getting, and (it’ll be) based on what we’re seeing (moving forward),” Day said.”He’s had a great attitude all year and I think because of that he’s playing late in the season for us. He’s an important part of our defense. He’s worked really hard and his attitude has been great, and so here we are with him out there in some of our biggest games.”

Williams impressed against the Spartans as well, racking up seven tackles and two TFL. If Gaoteote and Simon are still questionably against the Wolverines and Mitchell remains on the sidelines, Williams could be a candidate for increased playing time alongside Chambers or Eichenberg.