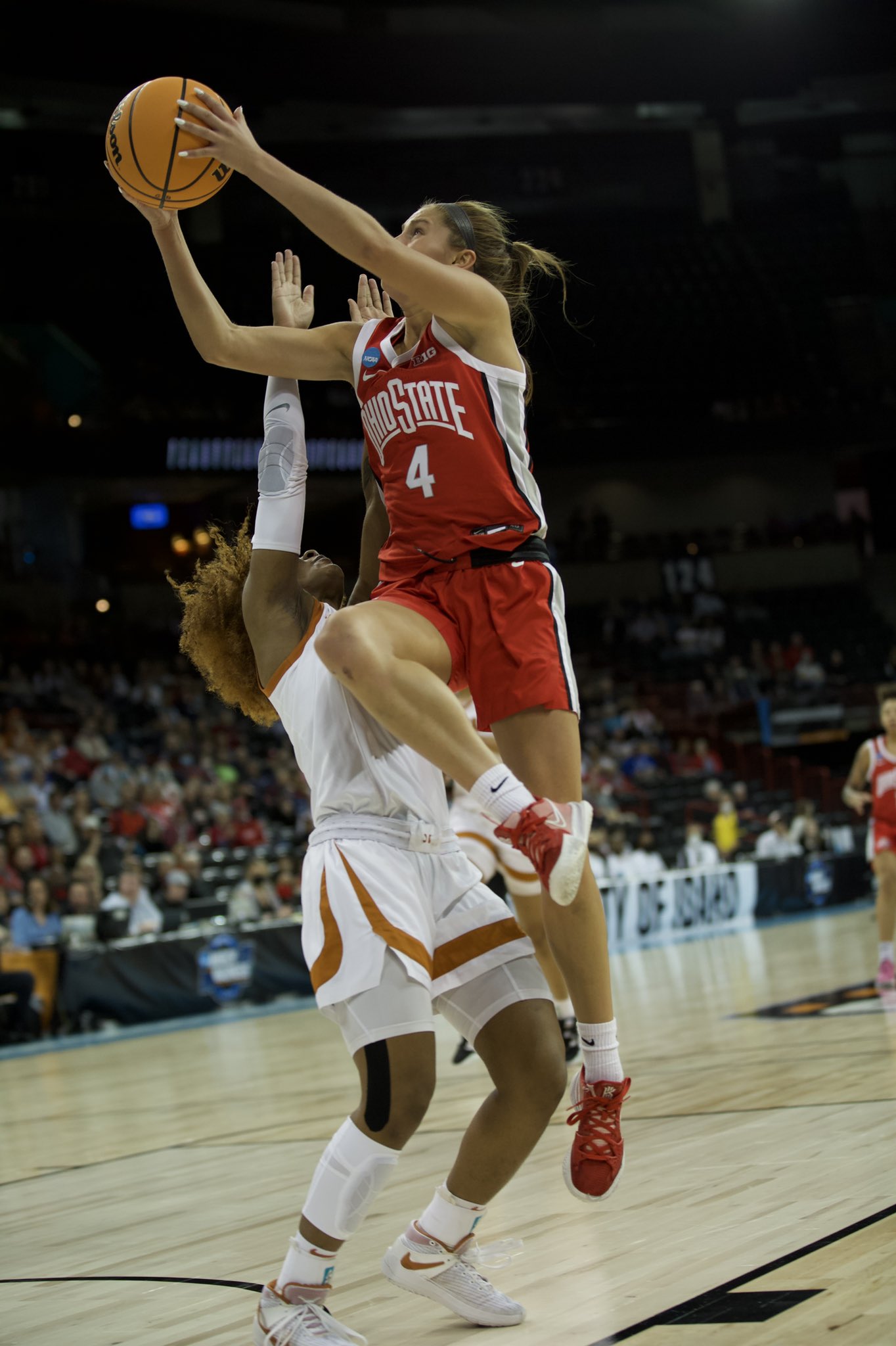 Ohio State’s season will end short of the Elite Eight, as the six-seeded Buckeyes fell in Spokane, Wash., to No. 2 Texas on Friday, 66-63.

After entering the final quarter down 50-45, the Buckeyes had several opportunities to make things close but were unable to complete the comeback.

Texas imposed its will in the game’s early stages, getting some pressure on the defensive end and scoring the Longhorns’ first three baskets in the paint. Texas traditionally has not shot often from deep this season, and that remained true as it shot just two 3-pointers in the first half.

The Longhorns also took an early advantage in rebounds to lead 12-7 with 5:20 left in the first, but Ohio State’s press began ramping up, pushing the Buckeyes to an 11-4 run to close out the first frame to take a 20-16 lead. During the run, Texas was held scoreless for over four minutes.

The run was due in part to the absence of Texas starting point guard Rori Harmon, who picked up two early fouls and was forced to exit the game with 2:26 remaining in the first. She did not return to the game until the second half.

Holding a lead and seeing Harmon on the bench, Ohio State head coach Kevin McGuff saw an opportunity to rest his own starting point guard in Jacy Sheldon. However, after not even two minutes, Sheldon was forced back to the floor after sophomore guard Kateri Poole picked up two fouls and the Longhorns scored five quick points.

Texas guard Joanne Allen-Taylor then hit a jumper to give the Longhorns a 25-24 lead with 6:51 remaining, and it set the stage for a poor run of basketball by both teams to close out the quarter. In total, the teams combined for 11 turnovers and were just 5 of 20 from the field as Texas took a 32-30 lead into the locker room.

Though Harmon was on the bench for 12:26 of the first half, the Buckeyes were outscored 20-17 with her off the court, certainly not the result McGuff was looking for with one of their best players out of action.

After two turnovers and three fouls in the first five minutes of the third quarter, Texas worked its way to a 41-36 lead, forcing McGuff to call a timeout with 5:40 remaining. Out of the timeout, junior forward Rebeka Mikulasikova was forced out of the game with her third foul, and the Longhorns knocked down their first triple of the game to take a 44-36 lead, their largest of the game.

Following a basket from senior guard Braxtin Miller and a steal on Texas’ ensuing possession by graduate forward Tanaya Beacham, Harmon picked up her third foul after going up for a ball with redshirt sophomore guard Rikki Harris.

Ohio State then cut the deficit to just one point, 44-43, but the Longhorns took a 50-45 lead into the final frame after the Buckeyes missed on their final four shots of the quarter.

Buckeyes senior guard Taylor Mikesell knocked down a triple – her second of the game – to make it a four-point game, 54-50, but the Longhorns converted Ohio State turnovers into points on their next two possessions to take a 58-50 lead with 6:42 remaining.

Following Harmon’s fourth foul that sent her back to the bench, Ohio State finally broke through with under five minutes remaining, forcing a scoreless possession by the Longhorns despite three offensive rebounds, and Sheldon then scored on the other end and was fouled. After another turnover by Texas, Sheldon hit her first triple of the game to make it 60-56 with 4:35 remaining.

Mikesell later connected on her third triple of the game to cut the lead to one point, 62-61, but Harmon responded with a jumper on the next possession. McGuff then called a timeout with just over a minute remaining, and out of the timeout, Ohio State forced a miss by Texas and got a Beacham jumper at the other end to trail 64-63.

Ohio State had the ball down one with under 30 seconds remaining, but were unable to connect on a pair of attempts, and were forced to foul the Longhorns. Harmon hit both free throws following a hard foul from Miller, and Beacham’s shot at the buzzer was blocked following some confusion on the offensive end by Ohio State, securing the 66-63 win for Texas.

Mikesell led the Buckeyes with 19 points on 7-of-12 shooting, and was 3 of 4 from deep. Sheldon added 17 points, and Beacham, has eight points and 10 rebounds. Allen-Taylor led Texas with 17 points.

Texas will play either No. 1 Stanford or No. 4 Maryland on Sunday, with tipoff set for either 7 p.m. or 9 p.m.