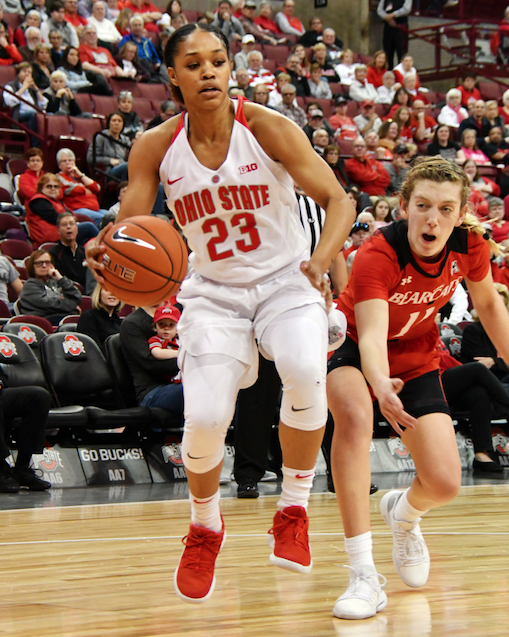 The forward duo of freshman Dorka Juhasz and fifth-year senior forward Makayla Waterman paced the Ohio State women’s basketball team with 11 points apiece, but the Buckeyes were unable to contain Amber Melgoza’s game-high 28 points for Washington as the Huskies pulled away 69-59 on Wednesday.

Before an announced crowd of 1,236 at Alaska Airlines Arena in Seattle, UW (6-3) won its third straight contest and snapped a two-game streak for OSU (3-3). Graduate guard Najah Queenland gave Ohio State eight points on 4-of-5 shooting to aid Juhasz (six rebounds) and Waterman (nine rebounds), who combined for 15 rebounds.

Turnovers were in an abundance on both sides as the Buckeyes and Washington committed 21 apiece, but the Huskies held a 24-16 point margin off of OSU’s miscues. UW wiped the glass as well with a 43-35 rebounding edge, led by Hannah Johnson’s game-high 11 boards.

Ohio State opened the action slowly, shooting 1 for 12 from the field and falling behind 13-3 with 2:17 left in the first quarter after a layup from Darcy Rees, who had seven points, put Washington in front of its largest lead of the first half. The Buckeyes clawed back behind an 8-2 run in the final 1:46, starting on Waterman’s three free throws and ending on Juhasz’s first career three-pointer with three seconds left, to trail 15-11 at the end of the opening period.

The Huskies pushed their lead back to 10 points as they opened the second quarter on a 10-5 advantage, leading 25-15 at the 5:21 mark after Mai-Loni Henson’s free throw. Consecutive layups from Queenland into the 3:21 point trimmed OSU’s deficit to 25-19 before Waterman’s jumper with 33 seconds left cut UW’s lead to 32-26 at halftime.

Ohio State continued to trade punches with Washington in the third quarter. After the Huskies had a 40-31 lead at the 5:33 mark off of Melgoza’s layup, the Buckeyes answered behind Waterman’s two free throws and Queenland’s layup to keep the score within striking distance at 40-35 with 4:27 left in the period.

UW rattled off nine straight points, however, widening its lead to the largest all game at 49-35 with 1:41 to go. OSU scored three points in the final 1:36, starting on graduate guard Carly Santoro’s free throw and culminating with freshman forward Aaliyah Patty’s layup at the 46-second mark, to take some momentum into the fourth quarter but trail 49-38. Santoro chipped in four points and a team-high four assists, while Patty pitched in six points on 3-of-5 shooting.

Ohio State came out swinging to start the closing period, spilling its third-quarter energy over into the first 1:25. Juhasz’s jumper and free throw in the opening minute got the Buckeyes on the board before freshman guard Janai Crooms, who added seven points, connected from long range and cut Washington’s lead back down to 49-44.

However, the five-point deficit was the closest OSU got the rest of the way. The Huskies bumped back up to double digits on Johnson’s jumper at the 5:51 mark to take a 58-48 lead. Crooms’ free throw and graduate guard Carmen Grande’s layup gave OSU a three-point response to trail 58-51 with 4:35 left in the game, but UW closed that door quickly.

Washington rattled off a 6-0 spurt capped by two free throws from Khayla Rooks, who gave the Huskies a 64-51 advantage with 2:15 to go. Ohio State was unable to climb out of the double-digit hole, hitting a triple from Grande with 20 seconds left for the 69-59 final.

As Ohio State breaks for final exams, an 11-day layoff leads the team into its annual game at St. John Arena on Dec. 16 against Florida. The Buckeyes host the Gators (2-6) at 1 p.m. inside the historic venue, where OSU will honor recent Women’s Basketball and Naismith Hall of Fame inductee Katie Smith.