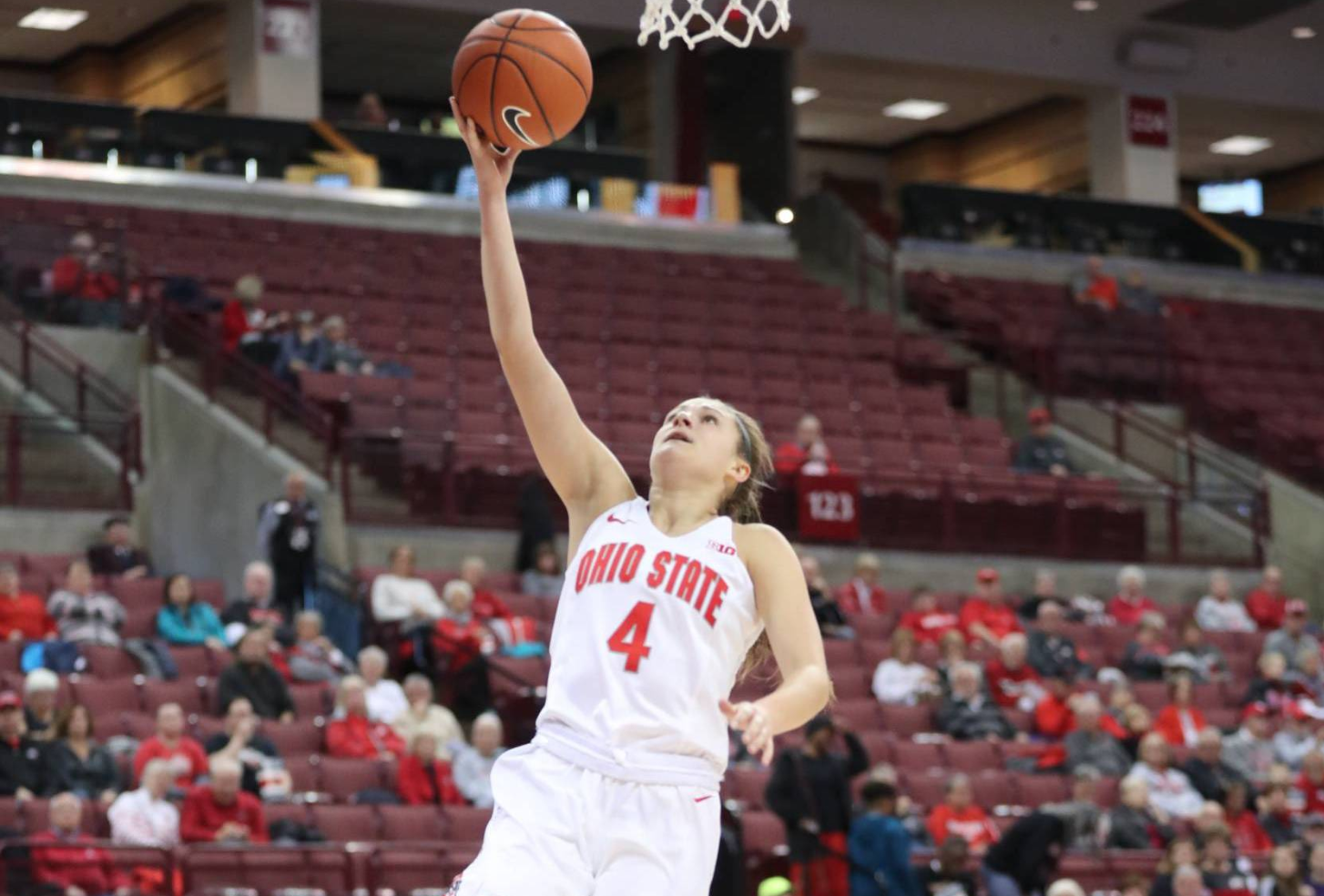 Following a loss to the top team in the country, Ohio State finished off its west coast road trip by rolling to a 104-74 victory against Sacramento State to end its nonconference slate with a 7-4 record.

This is the first time the Buckeyes surpassed 100 points during the current regular season, as they were able to put up 131 points against Urbana in a preseason exhibition. It was the 34th 100-point game in program history, and the first since a Dec. 15 matchup against Dartmouth when Ohio State put up 103 points.

The Buckeyes were able to handedly defeat the lesser opponent that came in with only one victory on the season, and managed to do so with a undermanned roster.

Sophomore Janai Crooms, and freshmen Kierstan Bell and Kaelynn Satterfield did not play for Ohio State tonight against Sacramento State because of a violation of team rules, per an Ohio State spokesman.

Ohio State head coach Kevin McGuff did not comment further on why the three did not play, and said he could not comment on if this will be the only game any of them will miss.

“Just a violation of team rules, and I’ll just kind of let that stand,” McGuff said.

Crooms and Bell were the only two players to had started in all 10 games this season. The duo was replaced in the starting lineup by a pair of freshmen in guard Jacy Sheldon and forward Aixa Wone, and gave Ohio State only seven dressed players to use in the game.

“You just have to step up and play, and I thought our kids did a great job at staying together,” McGuff said. “They really were great teammates tonight, and they really stepped up in a tough situation.”

Sheldon took advantage of the opportunity. In her second career collegiate start, she finished with a career-high 23 points on 9-of-11 shooting in 33 minutes.

“Jacy was really, really quick up the court today,” McGuff said. “She got a lot of baskets in transition just because she was running so hard,

Sophomore forward Dorka Juhasz may be used to starting for the Buckeyes, but she was crucial for Ohio State in the win, tying her career high with 27 points, 12 of which came during a pivotal third quarter, and also brought in 16 rebounds.

“Dorka did a great job,” McGuff said. “She had good balance, she scored from the perimeter, but more importantly is she had a great presence around the basket and her teammates did a good job getting her the ball there.”

Even without a full roster, Ohio State still managed to come out of the gates quickly, amassing a 36-20 lead after the first quarter.

But after leading by as much as 19 points, a pair of strong spans for Sacramento State — an 11-0 run and a 6-0 run, the latter of which came at the end of the second quarter — shortened the Buckeyes to 40-32 by halftime, with Sheldon’s 16 points leading all scorers.

The Hornets continued on that run early in the third quarter, scoring seven of the first eight points to cut Ohio State’s lead to two. But Ohio State immediately went on an 10-0 run from there and didn’t look back.

“I thought we stayed together, and we didn’t fracture when they made a run at us,” McGuff said. “We started guarding the ball a little bit better and contesting shots, and then also making some really good decisions in transition.”

On the night, Ohio State shot 51.9 percent from the field and only 22.2 percent from three, but held Sacramento State to 32.5 percent shooting overall on the other end. As a team, the Buckeyes also finished with a season-high 25 assists.

Though she wasn’t able to fully get her shot going, junior guard Braxtin Miller finished the game with seven rebounds, seven assists and seven steals to go with her 13 points.

Six of Ohio State’s seven active players finished in double figures, with Wone (five points) being the only player who did not reach the threshold.

With the win, McGuff now has 399 in his head coaching career. He will have an opportunity for win No. 400 when the Buckeyes open conference play against Purdue at noon on Dec. 28 at St. John Arena.

“They did a great job,” McGuff said of his seven-player rotation. “We rotated quite a bit tonight with our lineups, but the kids did a great job really playing hard, and especially with just seven people and this style of play, it was really great to see.”