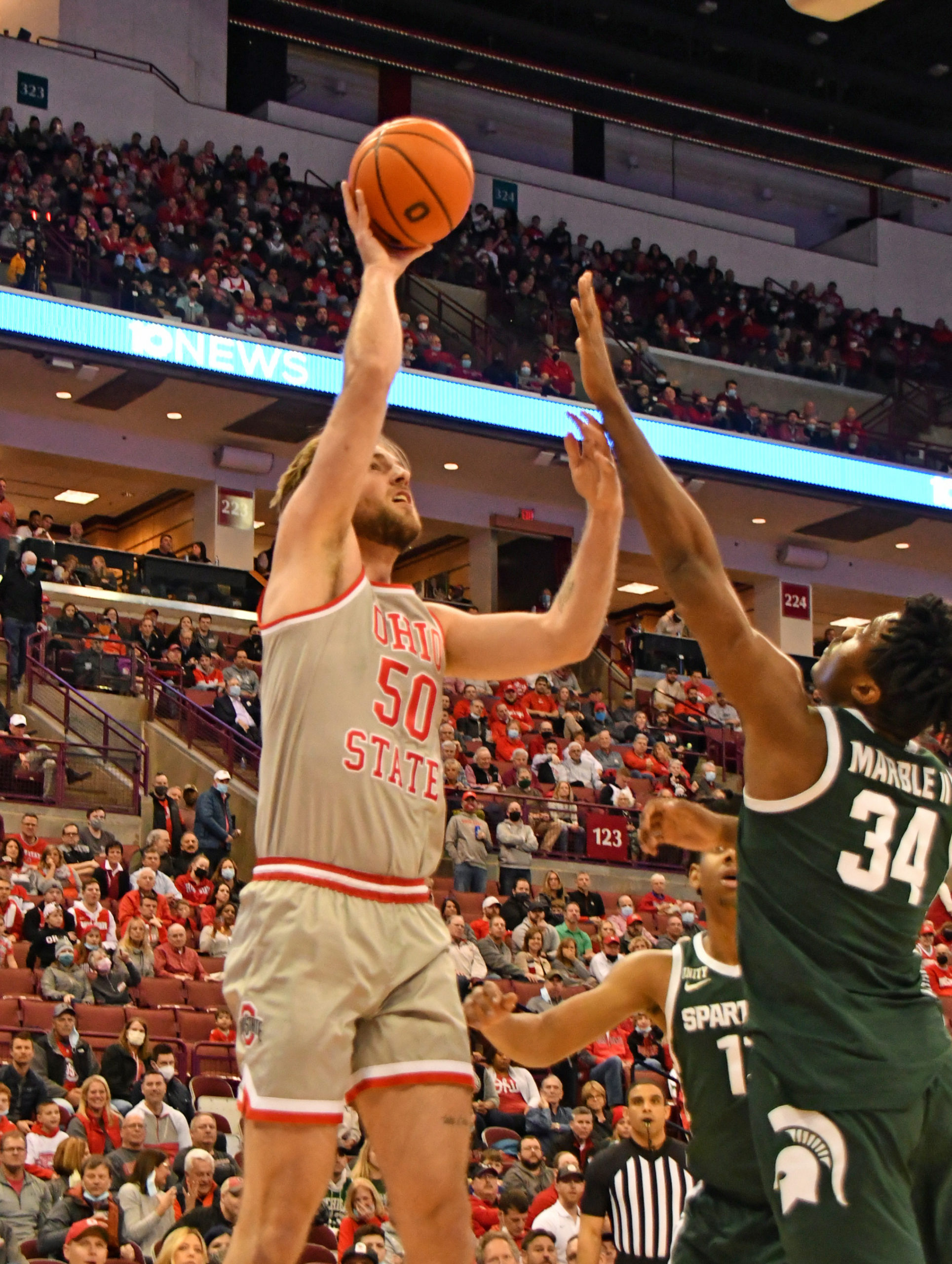 Ohio State entered its matchup against Michigan State with tired legs and in desperate need of a victory. With a 78-70 loss to Nebraska and a 75-60 loss to Maryland in the rearview mirror and their backs against the wall in the fight for the coveted double-bye in the Big Ten tournament, the Buckeyes knew they would have to dig deep and refocus on both sides of the ball to claim that much-needed win.

But it’s hard to imagine that even those players and coaches inside the home locker room at Value City Arena knew that they could dig as deep as they did in an 80-69 win over the Spartans that kept alive hopes of securing the No. 4 seed in league tournament play heading into the regular-season finale against Michigan.

With starting center Zed Key sidelined and in a walking boot and do-it-all forward Kyle Young unavailable because of an unspecified illness, the Buckeyes turned to seldom-used Indiana transfer Joey Brunk down low, relying on him for a season-high 33 minutes. It slotted winger Eugene Brown III into power forward minutes when starter E.J. Liddell needed a breather.

And above all else, head coach Chris Holtmann challenged his role players to step into the limelight and offer some relief for Ohio State’s stars, Liddell and point guard Malaki Branham, who had been running themselves ragged to keep the Buckeyes afloat offensively for much of February as many of those role players struggled with putting the ball in the basket.

It wasn’t a breakthrough for all of them. Ohio State’s bench contributed only three points, all from Cedric Russell, with two combined points from the trio of Justin Ahrens, Brown (who started) and Meechie Johnson Jr. But in one of the finest games in his collegiate career, Brunk pitched in 18 points. He had scored two points in the previous seven games and had only finished with double-digit points in 17 of his 116 previous collegiate showings.

At point guard, Jamari Wheeler knocked down four first-half 3-pointers and 16 overall points. When the Buckeyes needed their supporting cast most, they delivered an Oscar-worthy performance.

Of course, a supporting cast still needs its stars, and though they weren’t the main attraction of the evening, Branham and Liddell still offered more than enough star power to lift the Buckeyes above the Spartans. Liddell pitched in the quietest 19 points of the season with eight rebounds, helping Ohio State finish the game all but even (26 to 30) on the boards, which has been a major concern for Holtmann all season.

Branham led the Buckeyes in the box score with 22 points and put the first exclamation point on a superlative performance with four minutes to play, beating his defender to the hoop and throwing down a left-handed dunk over two Spartans to put Ohio State ahead by 14 points into the final media break of the game. For good measure, after a pair of MSU free throws, Brunk threw another exclamation point on the game with a slam of his own at the 1:52 mark.

A series of Buckeye free throws from Branham and Wheeler wrapped up the win – wire-to-wire domination of a tournament team, opened with an 11-0 run and closed with gusto by a podium game from the player that many least expected. Gabe Brown (13 points) and Marcus Bingham Jr. (11 points) were the lone Spartans in double digits.