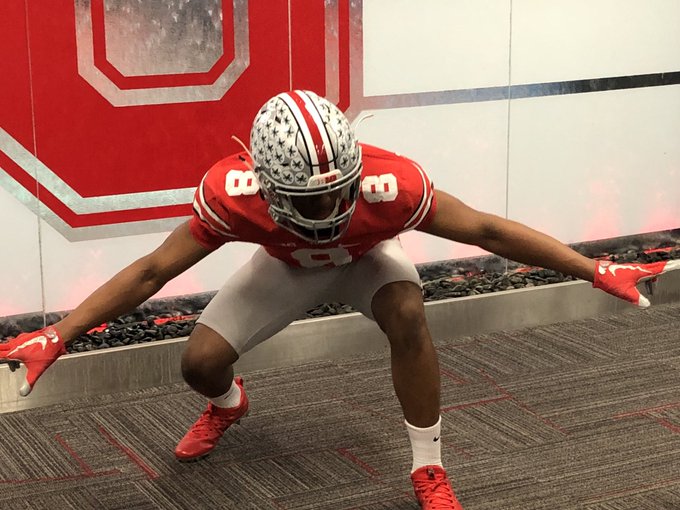 Entering the dog days of summer, Ohio State finds itself in uncharted territory, just as the rest of the country does, thanks to the coronavirus pandemic that essentially shut down college football from March to June. Entering June in the last four years, Ohio State held nine (2019, 2018), 12 (2017) and 13 (2016) commitments. In 2020, as the Buckeyes focus fully on the class of 2021, they hold an almost unprecedented 19 commitments, almost certainly the most that Ohio State has ever had at this point in a recruiting cycle.

OSU’s bump in commitments is reflective of a trend nationally, that recruiting analysts have chalked up primarily to the lack of visits for recruits during the spring, usually a busy time for trips to prospective schools.

“The class of 2021 is one of the most unique in the history of recruiting,” 247Sports analyst Bud Elliott wrote on June 5. “Prospects are committing at record rates, with almost 1,000 committed players as of the time of this writing compared to just 400 at this time last year.

“Prospects are scrambling to secure spots in classes, even if they have never visited those campuses. Our analysts know of several prospects who have tried to commit to multiple schools only to be turned away before finally finding a home.”

At Ohio State, the desire to get in the class early, with or without a visit has largely been a positive. The Buckeyes hold commitments from some of their top targets far earlier than they would in a typical cycle, and while that could create some chaos down the road when those players are permitted to visit schools again, Ohio State is confident that the players committed are only interested in playing in Columbus, and will spend most if not all of their visit time scoping out Ohio State.

Other schools, including Tennessee, Michigan, Florida, Minnesota, Rutgers, Boston College, Toledo and Colorado State, are sitting well above the typical mark as well, with each slotting into the top 50 of the 247Sports team rankings while holding at least 17 commitments. The Volunteers and Scarlet Knights sit at a whopping 24 and 21, respectively, and have accepted commitments from essentially any recruit that wanted to join the class, with a plan to sort out the final numbers at a later date.

While many of those schools may spend the final six months of this recruiting cycle looking to keep their class mostly together, while also looking to weather the visit storm that is coming soon, Ohio State, which seems to feel very secure in the pledges it holds, is focusing primarily on closing out the class of 2021 with just a few more top targets, with hopes of locking up a full group by the time the early signing period rolls around in December.

Chiefly among that small groups that Ohio State is looking to close out its class with is Monroeville (Pa.) Gateway four-star safety Derrick Davis Jr. Davis, ranked as the No. 55 player in the 247Sports composite rankings, has long been a top target for Ohio State’s coaching staff, first by former co-defensive coordinator Jeff Hafley and safeties coach Matt Barnes, and now by Barnes and new coordinator Kerry Coombs, though the primary relationship is with Barnes.

The 6-1, 194-pound safety would serve as the final piece to Ohio State’s defensive back class for 2021, a group that already holds commitments from cornerbacks Jakailin Johnson, Andre Turrentine, Devonta Smith and Denzel Burke, safety Jantzen Dunn and athlete Jaylen Johnson, though the latter is expected to move to linebacker at Ohio State. In that group, however, the Buckeyes lack a true playmaker at safety, like what Davis brings to the table. Dunn offers plenty of athleticism and size, but Davis is a plug-and-play into the position, according to 247Sports analyst Brian Dohn.

While Ohio State has shifted its focus in the backfield solely onto Davis, his recruitment appears to still be very much up in the air. He doesn’t share much with reporters, which has played a large role in his rather inconclusive 247Sports Crystal Ball prediction page: it currently reads in favor of Penn State with two predictions, one from 2018 and one from May of 2020, while a third prediction from lead expert Steve Wiltfong just lists him as “undecided.”

On the ground, the buzz is just as hard to get a feel for, especially without any recent visits to help Davis come to a decision.

“I think the longer he waits, the better it is for Penn State,” Roar Lions Roar editor Matt de Bear told BSB. “Two months ago, before everything got shut down, I would’ve said Ohio State had the edge. I don’t know if this has changed his decision-making timeline at all. He’s a kid that the Penn State staff has known, almost forever in a sense. Terry Smith, cornerbacks coach for Penn State, was the former head coach at Gateway where Davis plays, and so he’s obviously real well-known in the area in Western Pennsylvania, but especially at Gateway. Penn State been recruiting him really since his freshman year.”

The end of the extended dead period will likely play in large role in where Davis ultimately lands. He’s taken plenty of trips to see the home-state Nittany Lions, but he’s also been on Ohio State’s campus as recently as February, and will almost certainly pay another visit to Columbus during the season. The same can be said of Penn State and of Clemson, the latter of which is expected to get the first shot at hosting Davis on an official visit this fall.

After those visits, Davis may start to truly narrow things down, and barring anything extreme, Ohio State will likely find itself firmly within the final grouping of schools that Davis considers. Whether or not he ultimately lands at Ohio State will come down, primarily, to relationships.

“He’s been on campus at Penn State probably more than he’s been anywhere else, but he’s a real hard kid for us to get a read on,” de Bear said. “He doesn’t talk a whole lot. The last thing we really saw was, like I said, Ohio State and Penn State, I would say neck and neck, but I think he’s going to try and wait this out as long as he can. I know there was some talk among Penn State folks that Denzel Burke’s commitment might have potentially shut him out (at Ohio State), but it doesn’t sound like that’s necessarily the case. I think he intends to wait as long as he can just to spend more time on campus and get to know coaches.”