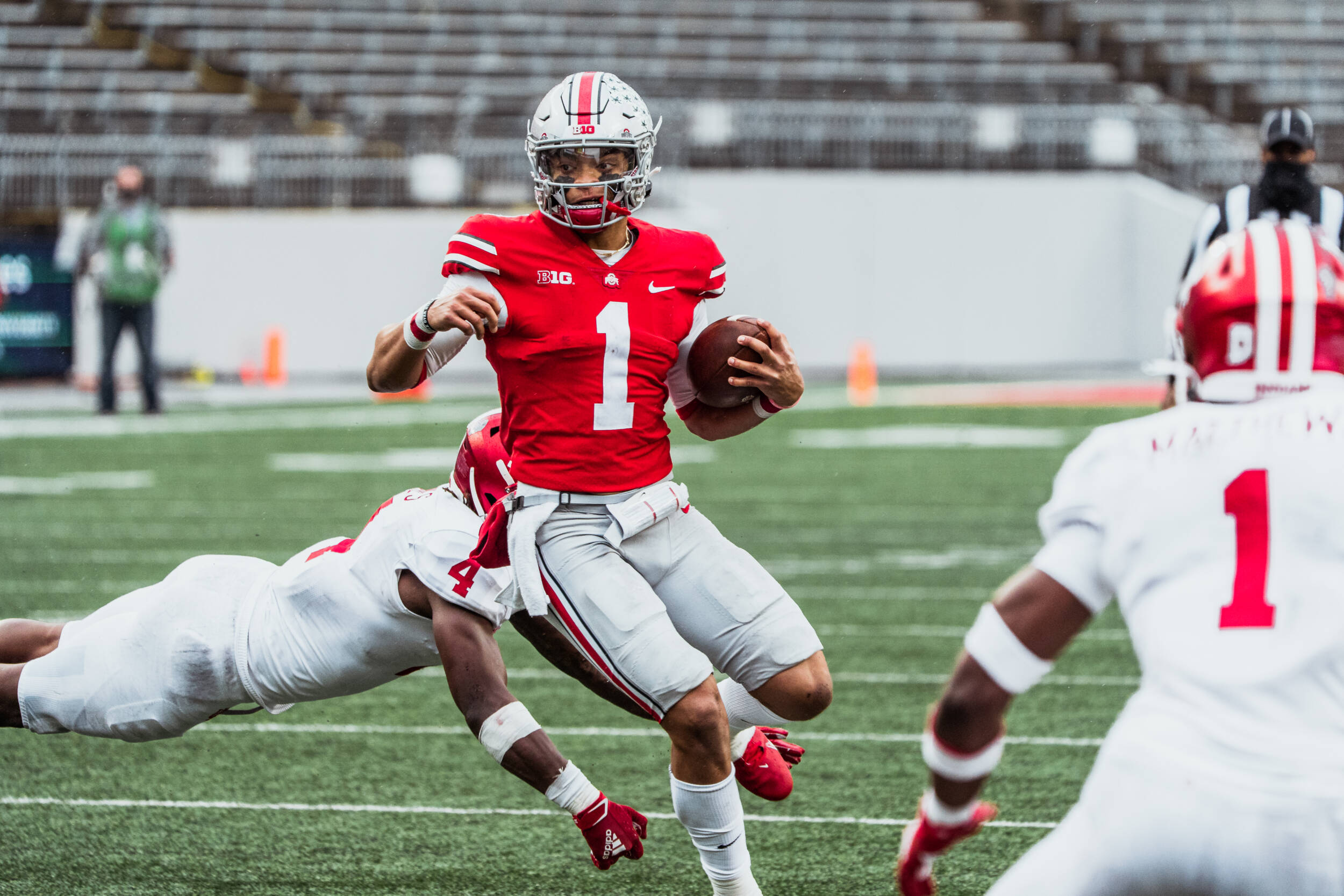 For the second straight game, Ohio State will be facing off against a Heisman Trophy finalist at quarterback.

This time around, it is Mac Jones, a former three-star prospect that took over for an injured Tua Tagovailoa in 2019 and never looked back. Jones finished third in Heisman voting this year behind Clemson quarterback Trevor Lawrence, who the Buckeyes just faced, and Jones’ teammate, Alabama wide receiver Devonta Smith.

Jones put up remarkably efficient numbers through the air in his first full season as a starter, numbers that even hold a sizable advantage to Ohio State’s Justin Fields, who finished seventh in Heisman voting a year after coming in third place.

Despite another strong year from Fields, Jones has an advantage in every major passing statistic minus passing touchdowns per game, and even there it is a tie, with both Fields and Jones throwing three per contest (Jones has 36 in 12 games, Fields has 21 in seven games).

Jones is the only quarterback in the Football Bowl Subdivision with a passer efficiency rating above 200, and is doing so on nearly 30 attempts (29.8) per game. His 336.33 passing yards per game is fourth in the FBS, and he is throwing an interception once every 89.25 throws.

Against Notre Dame, Jones competed 25 of 30 passes for 297 yards and four touchdowns in a 31-14 win that was never all that close. In that game, and in many other games this season, there is an argument to be had that Jones’ job was made a lot easier because of a certain Heisman winning wide receiver he had to throw to.

Smith brought in seven catches for 130 yards and three touchdowns against the Fighting Irish, bringing his ridiculous season totals up to 105 catches for 1,641 yards and 20 touchdowns, all numbers that were by far and away the best in the FBS.

Even with all of those gaudy passing numbers, Fields does outduel Jones dramatically in one area: rushing. Jones has a total of three rushing yards on the season and just one score on the ground, compared to Fields’ 316 yards and five rushing scores in five less games.

But Fields did not run whatsoever after his injury from the James Skalski hit against Clemson, so only time will tell with how mobile the third-year quarterback will be against the Crimson Tide.

There’s another variable to consider when comparing passing attacks: Jaylen Waddle, the star Alabama wide receiver that has been out since late October with an ankle injury. Waddle has 25 catches for 557 yards and four touchdowns in five games this season, numbers he legitimately achieved in four games after getting injured on the opening kickoff against Tennessee.

Waddle is a terrifying deep threat to deal with and had at least 120 yards in each of his first four games. He is currently practicing, and head coach Nick Saban has not gave any word on if Waddle will play or not on Jan. 11.

He likely won’t, or at least won’t likely be 100 percent even if he does play, but it is just another variable to deal with in Alabama’s pass game that has still been one of the very best in the country, with or without Waddle in the equation.

Fields played up to and past Lawrence’s level against Clemson when he threw for 385 yards and six touchdowns. He may have to do that once again to stave off what Jones, Smith and company are capable of doing through the air.