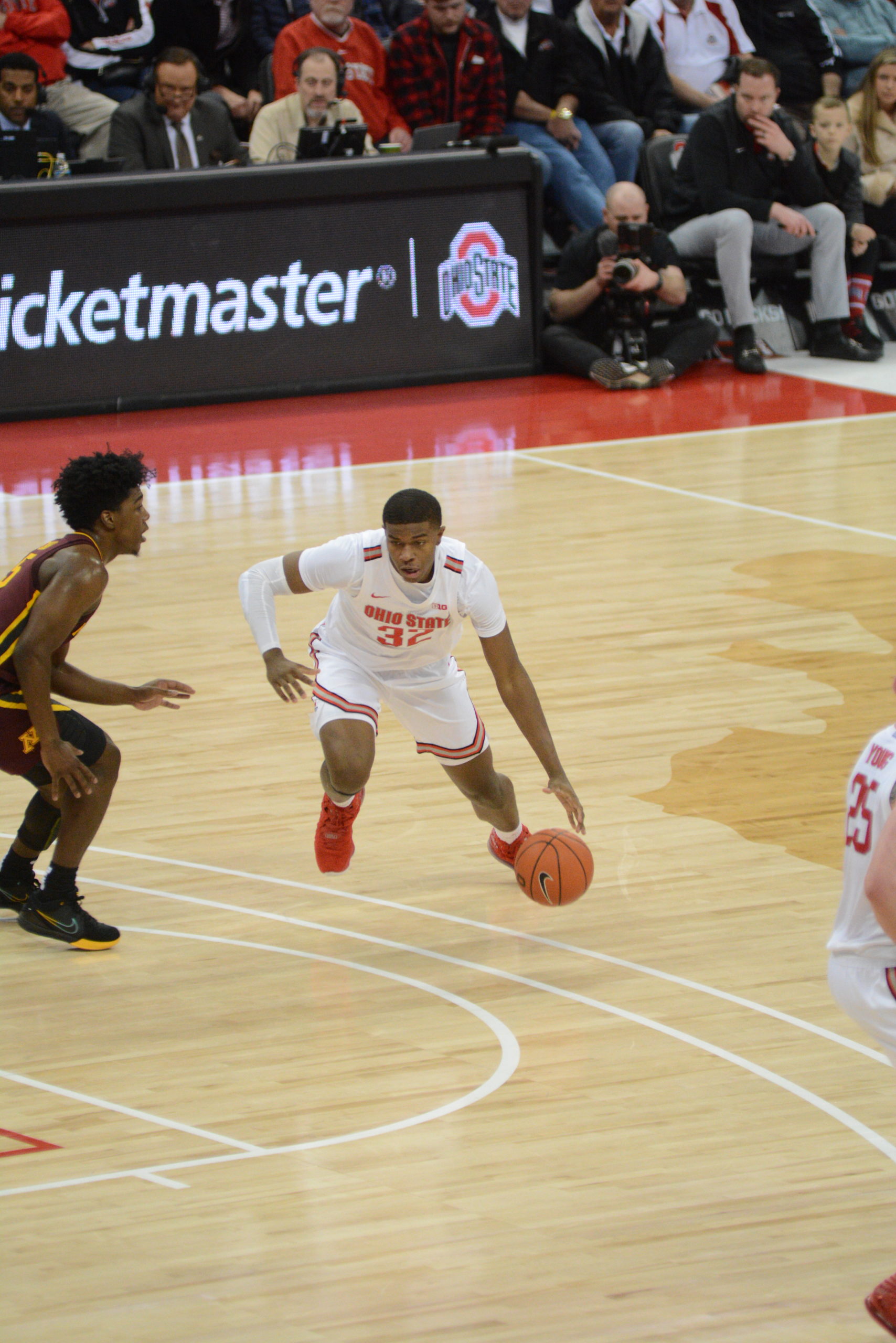 As part of our offseason men’s basketball coverage, Buckeye Sports Bulletin reviewed the performance of every player who appeared in games for Ohio State last season.

Additionally, we will analyze his place on the team ahead of the 2020-21 campaign. Concluding the series is forward E.J. Liddell.

As a true freshman for the 2019-20 Buckeyes, E.J. Liddell flashed his elite potential as a scorer and shot blocker.

Liddell came to Columbus as a four-star prospect from Belleville (Ill.) West, and in year one, he averaged 6.7 points and 3.8 rebounds per game.

Illinois’ top 2020 recruit, who was ranked No. 44 overall and No. 8 at power forward nationally, also blocked 29 shots across 31 games off the bench.

Liddell displayed a versatile skillset in his first season for Chris Holtmann’s Buckeyes.

Early in the season against Purdue Fort Wayne, Liddell flashed his athleticism and ability to get to the rack in the second half of a 85-46 win.

Liddell caught a pass in the corner before blowing past his defender to the hoop, where he elevated and dunked over the defense.

Early in Ohio State’s victory 68-59 over Indiana on Feb. 1, Liddell did an excellent job posting up and getting the defender on his back shoulder before catching the pass and hitting a turnaround jumper.

In his first year in scarlet and gray, Liddell displayed his ability to play with a high motor and make plays off his effort.

Down 18-3 at Iowa on Feb. 20, Liddell fought to corral and offensive rebound. The 6-foot-7 forward gathered himself under the rim and rose up through three Hawkeye defender for an and-1 finish.

Perhaps Liddell’s most impressive skill showed through on the defensive end. The two-time Mr. Illinois winner is an excellent shot blocker, who possesses exceptional timing.

Liddell showcased his blocking ability at Iowa, rotating over and meeting the ball at its apex for an effective swat.

Toward the end of the season against Nebraska, Liddell made a tremendous play with a double block against the Huskers in a 75-54 win on Feb. 27.

Helping off his man to pick the Husker attacking the basket, Liddell quickly slid over to block the layup attempt. When the shooter grabbed his own miss, Liddell displayed tremendous athleticism with his second jump, swatting the second shot attempt as well.

Although he was only a true freshman, Liddell demonstrated that he was one of the best players in the program already in 2019-20.

With the departures of D.J. Carton, Luther Muhammad, Andre Wesson, and Kaleb Wesson, there are important roles available for the Buckeyes moving forward.

Liddell will help fill those voids, especially those left by the Wessons, who were among the best defensive players on last year’s team.

Carton and Muhammad, who transferred to Marquette and Arizona State, respectively, combined for 17.4 points per game last season. The Wessons contributed a combined 23.2 points and 13.2 boards per night.

With all that production out the door, Liddell will be thrust into a much bigger role as a sophomore, and though he will still be an underclassman, he is ready for the challenge.

Liddell’s versatility on offense makes him tough to defend. He can knock down midrange shots with ease or drive to the basket and score at the rim. He will need to improve his outside shooting, particularly from beyond the three-point arc, to maximize his potential.

Perhaps the most important skill he will need to bring to the 2020-21 group is his elite timing as a shot blocker. Without Kaleb Wesson, the Buckeyes will be in need of rim protection, and it will be important for Liddell to block and alter shots without getting into foul trouble.

Overall, Liddell may very well end up being one of the most important players for Ohio State this season.