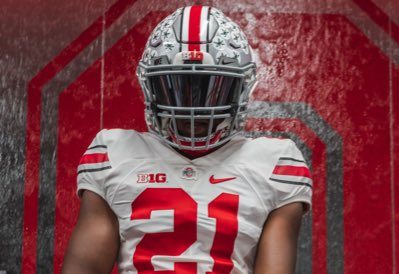 Cornelious (N.C.) William Amos Hough four-star running back Evan Pryor officially ended his recruitment when he signed with Ohio State during the first day of the Early Signing Period on Wednesday.

The 5-10, 190-pound Pryor is considered the second-best all-purpose back and No. 81 prospect overall in the class of 2021, as he rushed for 3,674 yards and 42 touchdowns in his three-year varsity career. He picked the Buckeyes over finalists Georgia, North Carolina, Oklahoma, Penn State and USC on March 16.

Pryor had been among the staff’s top targets at the position since he landed an offer from assistant coach Tony Alford in February 2019. The two worked together during an instructional camp in Columbus that June, then caught up again when Pryor returned to campus for an unofficial visit for the 28-17 win over the Nittany Lions that November.

Alford, offensive coordinator Kevin Wilson and wide receivers coach Brian Hartline also stopped by Pryor’s high school on separate occasions during the the January contact period, and those visits ended up being more significant than expected given Pryor’s unofficial visit, set for March 18-20, was cancelled thanks to the coronavirus outbreak.

Ohio State also overcame a late push from the Tar Heels, as Pryor took several unofficial visits to Chapel Hill over the winter given the campus’ proximity to his hometown.

Pryor is joined in the Buckeyes’ 2021 recruiting class by Hopewell, Va., five-star running back TreVeyon Henderson.