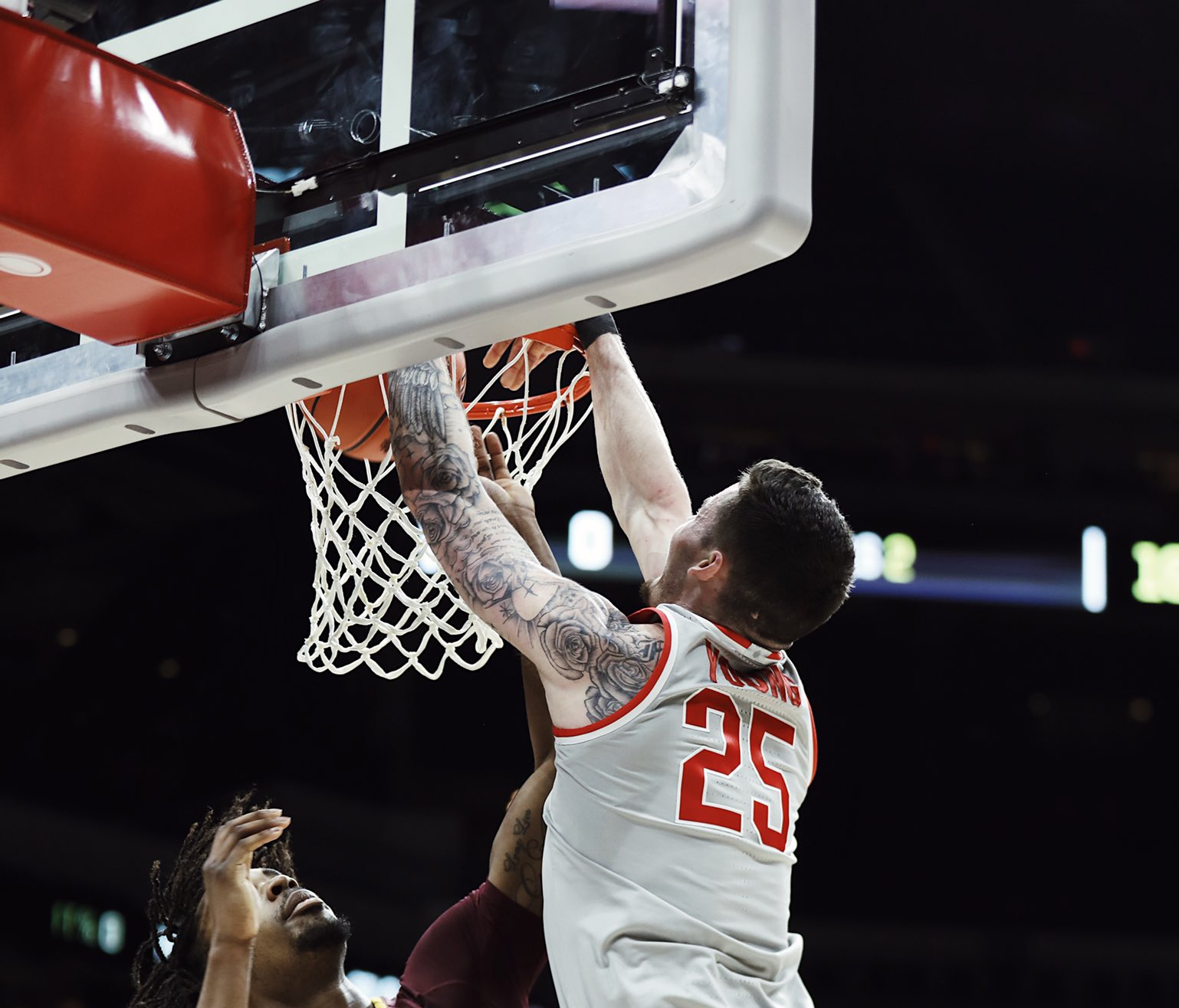 The No. 9 Ohio State men’s basketball team defeated Minnesota 79-75 in the second round of the 2021 Big Ten Tournament at Lucas Oil Stadium in Indianapolis on March 11, ending a four-game losing streak.

“It’s March, so you know you’ve got to survive and advance,” Walker said. “You have to do what you have to do. Minnesota got going at the end, made some tough shots, got some turnovers. We missed some free throws toward the end, and some momentum plays that they had brought them back into the game.

“But we stay connected – that’s something I mentioned while we were going through our losing streak – staying connected, so I feel like that’s what we did toward the end.”

The Gophers cut the lead to 53-49 with 7:38 left on a strong second-half surge, but the Buckeyes bounced back with a game-breaking 9-1 run across the next 2:08 to push their lead to 62-50, highlighted by a converted and-one by Walker.

Ohio State pushed its lead to 70-56 with 3:24 left on back-to-back buckets from Walker and Washington, but Minnesota refused to quit. The Gophers ripped off an 18-5 run across the next 3:06, cutting the lead to 75-74 on a Marcus Carr three-pointer with 18 seconds remaining.

With eight seconds left, Liddell knocked down a pair of foul shots to push the Buckeye lead to 77-74. Ohio State fouled Carr, and he split a pair of free throws with six seconds left. Minnesota fouled Washington, and put the game with two foul shots to make it 79-75 with two seconds to play.

“I’m proud of E.J. knocking those free throws down late,” Holtmann said. “You’re going to miss some free throws, we missed a couple of critical ones, but I feel good about being able to survive and advance and move forward.”

The Buckeyes jumped on the Gophers early, playing aggressive offensively and locked in defensively on their way to a 13-0 start across the opening 6:55.

Washington and senior forward Kyle Young set the tone, with Washington’s two-handed slam igniting the Ohio State sideline and giving his squad a 6-0 edge 3:24 into the game. He rose up above Minnesota forward Eric Curry and posterized him on a feed from Young.

Then, Young threw down a powerful two-handed dunk of his own, cramming the ball on Minnesota center Sam Freeman through a foul on a feed from Liddell. Young converted the and-one to push the lead to 9-0 just 3:55 into the contest.

Next, Sueing finished through a foul following a smooth spin move, but he missed the foul shot, and then Young capped the streak on an alley-oop slam from Washington to make it 13-0 with 14:37 until halftime.

The Gophers responded with a 7-0 spurt to cut the deficit to 13-7 with 10:16 until the midway point, but Ohio State stayed strong. The Buckeyes pushed their lead to 21-11 on a rare dunk by junior wing Justin Ahrens with 5:54 until halftime.

However, junior wing Musa Jallow was called for a questionable flagrant foul with 5:41 until halftime, and the Gophers used that momentum for a 6-0 spurt  in 36 seconds to cut the deficit to 21-17 with 5:05 until intermission.

Liddell and Minnesota freshman guard Jamal Mashburn exchanged three-point makes, and the Gophers trailed 24-20 with 4:31 until the break.

The Buckeyes ripped off an 11-2 run across the next 2:13, sparked by an alley-oop slam by Sueing from Washington and capped by an alley-oop layup by Jallow from Walker after a blocked shot by Jallow, giving them a 35-22 lead with 1:53 until halftime.

Jallow threw down a two-handed slam in transition with six seconds until halftime after a steal, sending Ohio State into the break with a 39-27 edge.

The Gophers outscored the Buckeyes 16-7 across the next 8:14, cutting their deficit to 53-49 with 7:38 on the clock with four triples and a pair of layups.

Young stood out inside for Ohio State, scoring 11 points and grabbing six boards. Jallow came up big for the Buckeyes off the bench, scoring eight points on 4-of-4 shooting and adding two steals and two blocks in 12 minutes.

“I thought he was terrific. He just played his role at a really high level,” Holtmann said of Jallow. “He was active defensively, got to where he needed to. He was really, really good. And we needed his defense; we needed his activity, especially with Kyle’s two fouls.”

Carr paced Minnesota with 24 points on 7-of-24 shooting, while Mashburn added 18 points on 8-of-22 shooting.

“Minnesota is a really good team, they fight to the end,” Walker said. “Played physical, played aggressive, that’s what they did when they came back in that timeframe. But we stuck together, made some tough plays at the end, and finished them.”

Ohio State will take on Purdue in the quarterfinals of the Big Ten tourney on March 12 at 2 p.m. ET on Big Ten Network.

For four free issues of the print edition of Buckeye Sports Bulletin, no card required, sign up at the link here: http://www.buckeyesports.com/subscribe-4issue-