No. 4 Ohio State Falls 92-87 To No. 3 Michigan Despite Career-High 30 Points From Duane Washington Jr. 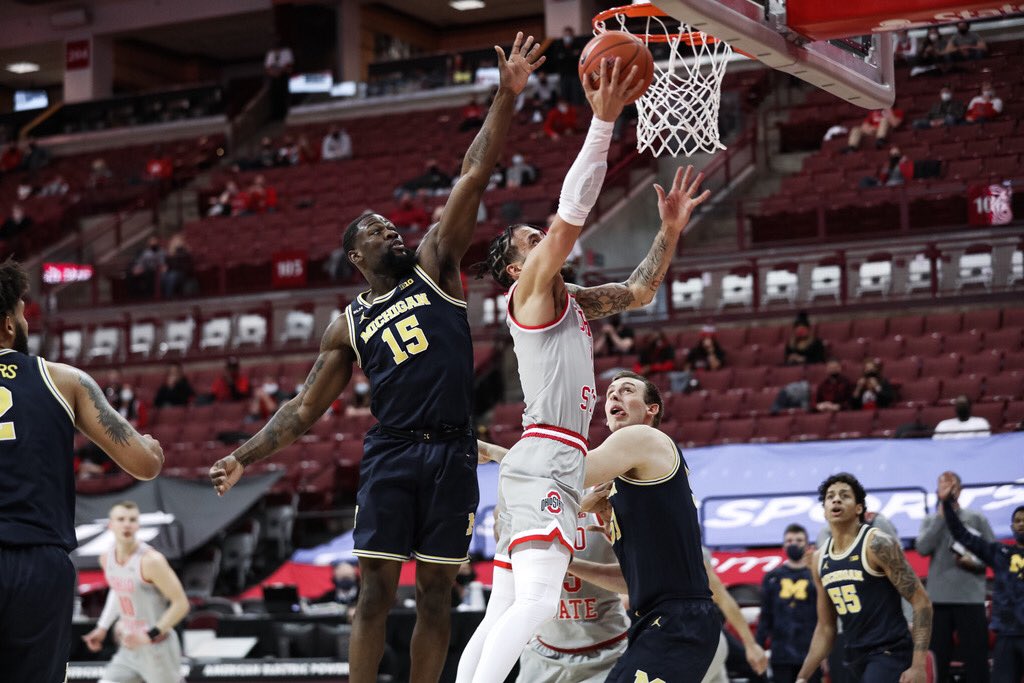 The Buckeyes (18-5, 12-5) lost for the first time since Jan. 19 despite a career-high 30-point effort by junior guard Duane Washington, who hit 12 of 18 shots. Sophomore forward E.J. Liddell scored 23 points and grabbed 10 rebounds, while fifth-year senior guard C.J. Walker added 15 points on 6-of-9 shooting off the bench.

“I’m disappointed, there’s no question,” Ohio State head coach Chris Holtmann said. “If you lose a game, you’re disappointed. The expectation for us was that we were going to play well. In spots, we did play well. We didn’t finish the game well enough, so I’m disappointed in myself.

“Our guys competed and battled. There’s no question this team has an unbelievable connection, played the right way offensively. We had a great spirit about us. But it’s disappointing.”

Michigan (16-1, 11-1) held a 73-69 edge with 4:52 to play before Washington knocked down a step-back three-pointer to cut the deficit to one with 4:36 left. Michigan freshman center Hunter Dickinson responded with a powerful two-handed slam to put the Wolverines up 75-72 with 4:15 on the clock.

Michigan led 75-74 after a pair of Walker foul shots with 3:38 to play and the game in reach, but Ohio State struggled down the stretch, giving up two free throws to Dickinson before a turnover led to an and-one layup for Michigan junior wing Isaiah Livers to lead 80-74 with 2:33 remaining.

Liddell hit two free throws to cut the deficit to four, but Michigan answered with layups from Dickinson and senior guard Eli Brooks to lead 84-76 with 53 seconds left, marking its largest lead of the game.

The Buckeyes did not go down without a fight with fourth-year junior wing Justice Sueing hitting a triple and Walker making a layup in between a pair of three-pointers by Washington in the final 44 seconds. However, Michigan went 8 of 10 from the foul line in that span to clinch the five-point victory.

“It was a great game, man. A battle of two top-five teams, and I thought we competed at a really high level and did some really good things on both ends,” Washington said. “We’ve just to be a little bit better in the last four. We thought we were in good position to bring it home and, basketball is a game of runs, and they had there’s toward the end there. We’ve just got to be a little better in the closing stretch.”

Earlier in the second half, the Wolverines went up 59-55 on a finish by Dickinson with 13:25 on the clock, but the Buckeyes bounced back with a 7-0 streak sparked by a tough and-one finish by Washington and capped by a floater by Washington to give the home team a 62-59 edge with 11:43 left.

After Ohio State went up 65-61 on an and-one layup by senior forward Kyle Young, the visiting Wolverines ripped off a 6-0 streak sparked by four points from graduate guard Mike Brown and capped by a layup by sophomore wing Franz Wagner off a turnover to take a 67-65 lead with 8:13 to play.

Liddell answered with a strong and-one finish, putting the Buckeyes up 68-67 with 7:14 to play after hitting the foul shot, but that was the last lead Ohio State held.

The Buckeyes and Wolverines battled back and forth through a hotly contested first half where neither team led by more than six points.

Ohio State’s largest lead of the contest came on a tough step-back three-pointer from Washington to put the home team up 19-14 with 11:18 until halftime. Michigan immediately answered with an 8-0 run sparked by a pair of triples from guard Chaundee Brown and capped by a powerful slam by Dickinson to take a 22-19 lead with 8:25 until the midway point.

The Big Ten powers exchanged buckets following Michigan’s run, and Washington weaved through the Wolverine defense for a tough layup to cut the deficit to 29-28 with 5:55 until intermission. A layup by Dickinson followed by a step-back triple by Smith in the corner pushed the visitors’ lead to 34-28 with 5:02 left in the half.

Ohio State used a 10-2 stretch across 1:51, sparked by an old-fashioned three-point play by graduate forward Seth Towns and capped on a triple from freshman guard Meechie Johnson to take a 38-37 lead with 2:47 until the midway break.

The back-and-forth battle continued until Brooks gave the Maize and Blue a 45-43 lead at halftime by making a buzzer-beater layup.

“It’s paramount,” Holtmann said of attention to detail defensively. “We were playing one of the best offenses in the country, and obviously their defensive numbers are exceptional as well. It’s paramount, so I think that’s an area we can improve in. We did some good things, there’s no question, we did some really good things. But I think a couple of our errors there throughout the course of the game were just too much to overcome.”