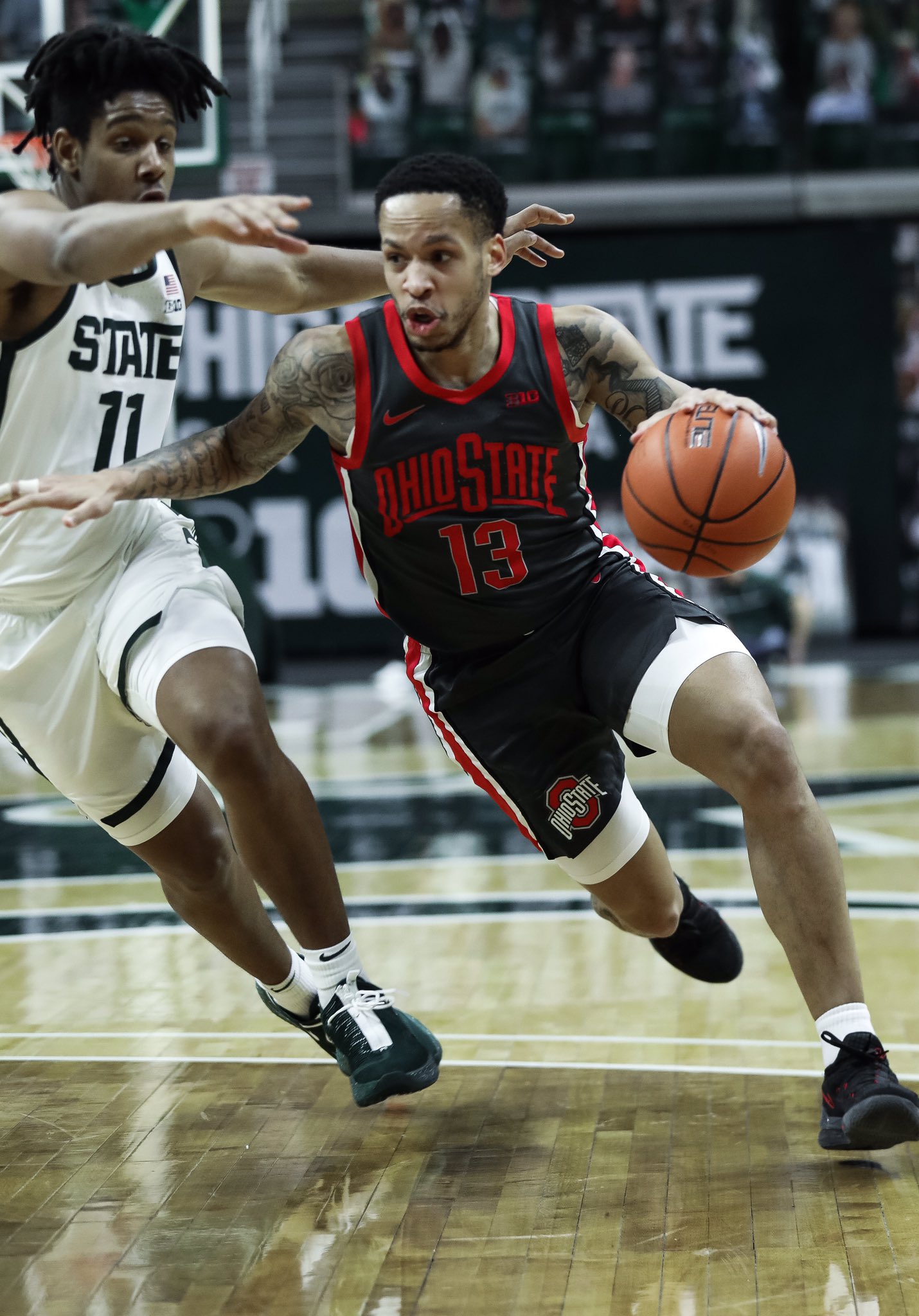 The Buckeyes (18-6, 12-6) fell to the Spartans (13-9, 7-9) despite 18 points and eight rebounds from sophomore forward E.J. Liddell, 17 points from junior guard Duane Washington, and 12 points and five assists from fifth-year senior guard C.J. Walker.

The Spartans never gave up, clawing their way to tie the game at 55 with 6:42 to play. Ohio State’s top two scorers stepped up, with Liddell scoring four in the paint and Washington knocking down a mid-range jumper that made it 61-57 with 4:46 left.

Sharpshooting forward Joey Hauser answered with a triple for the Spartans to cut the deficit to 61-60 with 4:25 remaining. Walker drew a foul and knocked down a pair of free throws to push Ohio State’s lead to 63-60 with 3:16 left.

Michigan State took control of the game with a 6-0 spurt on four foul shots and a tough pull-up jumper by junior wing Aaron Henry to take a 66-63 lead with 1:08 left.

Liddell drew a foul and knocked down both of his free throws to the lead to 66-65 with 48 seconds left, but Spartan guard Joshua Langford nailed a clutch mid-range jumper to go up 68-65 with 30 seconds left.

Washington and Walker missed two difficult three-point tries, but Liddell drew a foul on the rebound attempt to keep Ohio State alive. He calmly hit both foul shots to cut the lead to 68-67 with 14 seconds left.

Hauser only made 1 of 2 free throws to go up 69-67 with 12 seconds on the clock, leaving the Buckeyes with another chance. Washington missed a tough layup with four seconds left through a lot of contact.

Langford split the pair for the Spartans to push their lead to 70-67, and Walker attempted a full-court heave to Liddell, but it was incomplete when Liddell was held up with a lot of contact. Holtmann picked up his second technical following the play, ending his night with one second still on the clock.

“They just made a few more shots, and we had trouble finishing around the basket and missed a couple clean looks,” Holtmann said.

Before the closing stretch, the Green and White erased Ohio State’s seven-point halftime lead with a 7-2 start to the second half through the first 3:15. Sophomore guard Rocket Watts scored five points and Langford knocked down a pair of free throws after Ohio State head coach Chris Holtmann was called for a technical after arguing that Liddell was hit on a missed shot.

“In that moment, honestly, I I just thought that plays that were normally called fouls in most of every Big Ten game were not being called fouls. And I thought that was an obvious one and expressed that,” Holtmann said. “Certainly, you want to fight for your guys – E.J. is a really good player – he also has to own the fact that he’s got to play with more force. This is how the game is going to be called. We’ve got to prepare him for that better.”

Liddell ended the stretch with a strong finish after sealing his man under the bucket and finishing on a feed from junior wing Musa Jallow to push the lead to 53-48 with 9:04 on the clock.

In the first half, Michigan State led 15-13 before Ohio State tied the game with a strong finish by freshman forward Zed Key with 12:51 until halftime, sparking a 9-2 spurt for the visitors.

Walker followed Key’s bucket with a triple before Marcus Bingham made a layup for the Spartans. Juniro wing Justice Sueing and Key both finished in the lane to push the lead to 22-17 with 10:23 until the midway point.

Tom Izzo’s squad answered with a 7-2 spurt, starting with a rebound putback by Bingham and capped by five points from guard Gabe Brown to even the score at 24 with 7:25 on the clock.

The Buckeyes pushed their first-half lead to 35-29 on a three-pointer by Walker, who froze the defense with a pass fake following a kick-out pass from Liddell with 4:50 until the break.