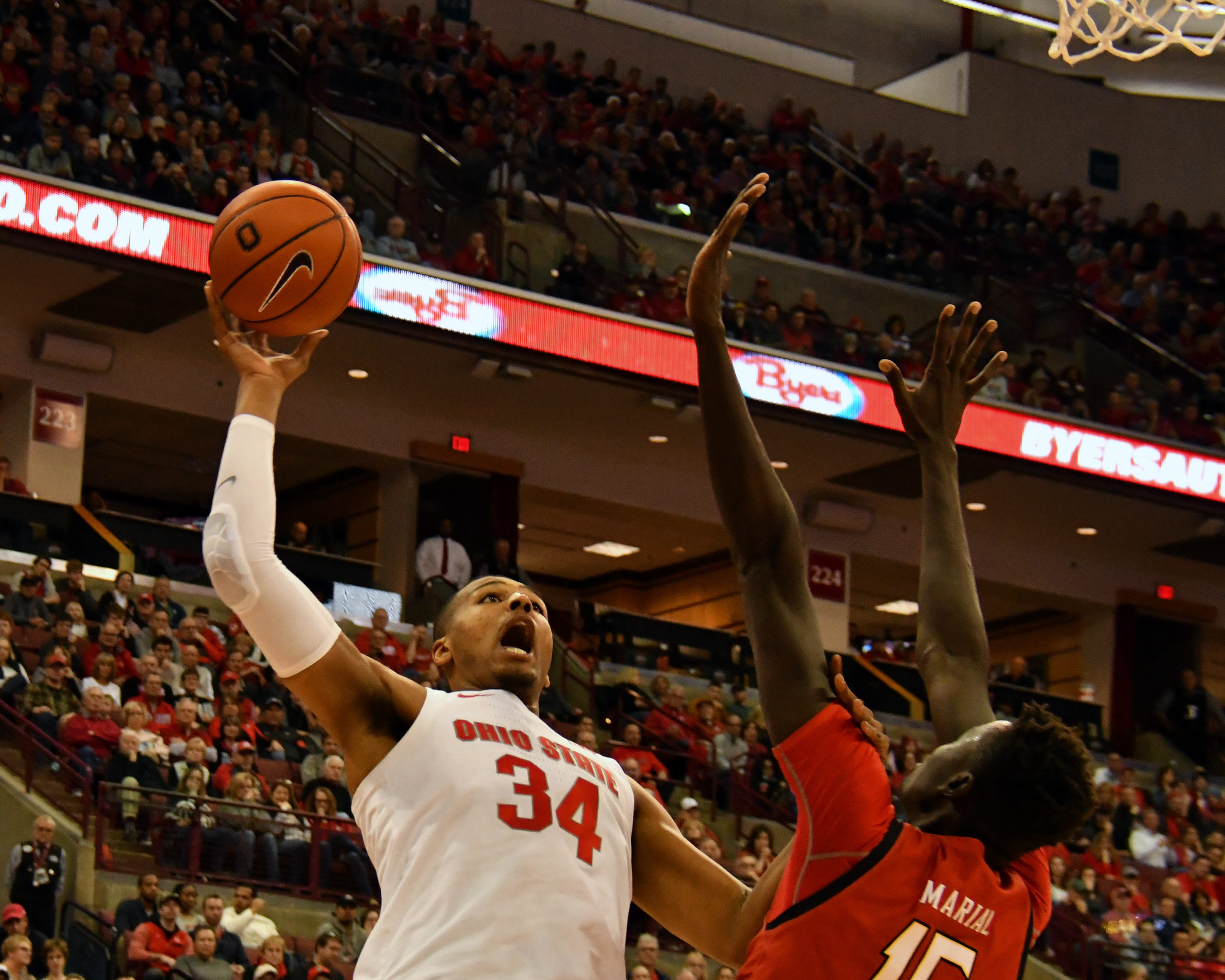 The No. 25 Ohio State men’s basketball team defeated No. 7 Maryland  79-72 behind superb shooting and sound defense in front of a sellout crowd of 18,809 at Value City Arena on Feb. 23.

Sophomore guard Luther Muhammad led Ohio State (18-9, 8-8) to victory over Maryland (22-5, 12-4) with 22 points, hitting 4 of 8 three-pointers and all eight of his foul shots. Muhammad also held Maryland standout guard Anthony Cowan to 10 points on 1-of-4 shooting, which led him to be asked which part of his performance he was most proud of.

“I don’t really pay too much attention to that,” Muhammad said. “I’m happy we won. I’m happy we all played hard, we all stayed together. They made a lot of runs, they dug themselves back into the game, and we just stayed together, played as one and continued to work hard on defense.”

After Maryland cut the lead to three, Chris Holtmann’s squad responded with a 6-2 stretch to put it up 64-57 with 4:15 to play, sparked by a slam dunk by Kaleb Wesson on an assist from Andre Wesson.

Cowan cut the deficit to five with a layup but received a technical foul for kicking in Kaleb Wesson’s direction while on the ground, giving him five fouls and disqualifying him with 3:54 left.

Following Cowan’s foul out, the Buckeyes hit 4 of 4 free throws with a layup from sophomore guard Eric Ayala in between to push their lead to 68-61 with 3:10 left.

The Terrapins would not go away, though, with sophomore guard Aaron Wiggins cutting Ohio State’s lead to four twice on three-pointers (68-64 with 2:41 left, 76-72 with 30 seconds left). Muhammad and sophomore guard Duane Washington iced the game for Ohio State at the charity stripe, however, finishing 8 for 8, and 7 of 8 on foul shots, respectively.

Ohio State began the second half with a 7-0 run on a Kaleb Wesson triple and buckets from Andre Wesson and junior guard C.J. Walker, carrying over a strong first-half finish for an extended 17-3 stretch overall.

“And that opening stretch – we talked about it at halftime – this is going to say something about us, how we start this second half against one of the best teams in the country.”

The stout Scarlet and Gray defense held the Terrapins without a field goal for 7:24 during the long run, with the visitors’ only three points coming on foul shots by Cowan while the Buckeyes built their lead to 47-33.

The Terrapins took a 14-11 lead with 12:53 until halftime on a Wiggins three-pointer from Cowan, who assisted on five consecutive Maryland baskets.

Ohio State answered with a 7-0 stretch spanning 1:05 with Kaleb Wesson splitting a pair of free throws and Muhammad and Andre Wesson knocking down back-to-back three-pointers to take an 18-14 lead.

The Buckeyes and Terrapins battled through a competitive first half with Maryland tying the game at 30 with 3:12 until halftime on two foul shots from Maryland junior guard Darryl Morsell. Ohio State ripped off an 8-1 run in 2:24 with consecutive triples by Muhammad and two free throws by Washington.

Cowan connected on two more free throws before Washington concluded the first-half scoring with a smooth left-handed layup, carrying Ohio State into the intermission up 40-33.

Superb three-point shooting and rebounding led to the Buckeyes’ seven-point halftime advantage. Ohio State knocked down 8 of 16 shots from beyond the arc and grabbed 19 rebounds, including seven on the offensive end, compared to Maryland’s 4 of 12 mark on triples and 14 rebounds.

With 4:29 left in the first half, Ohio State junior forward Kyle Young came down with a rebound but landed awkwardly with his right foot rolling underneath him. He did not return with a high ankle sprain.