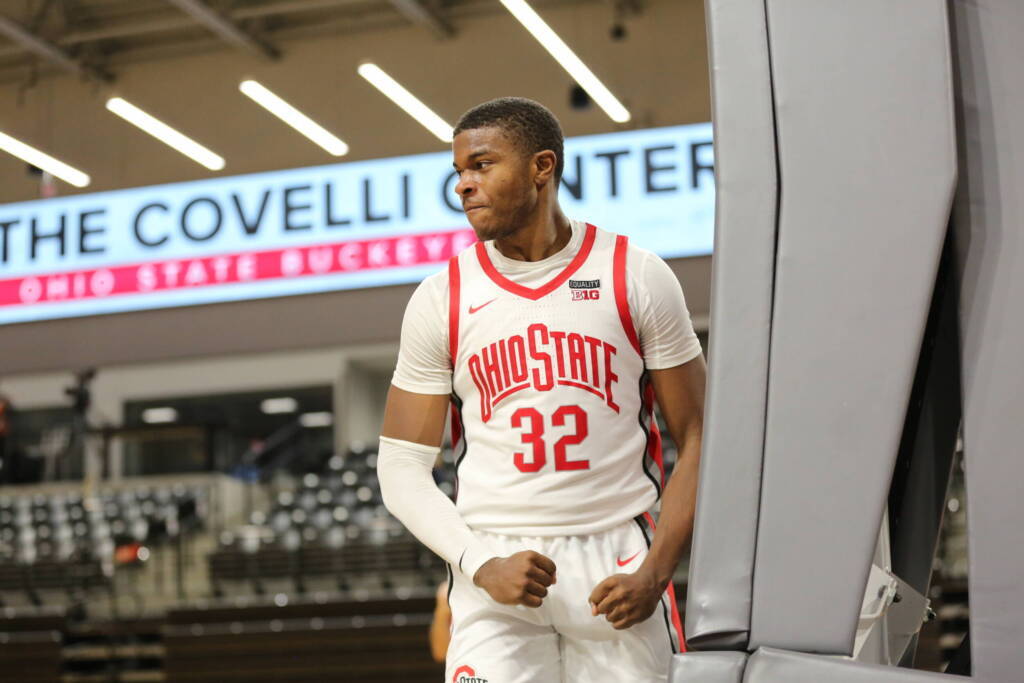 The No. 23 Ohio State men’s basketball team defeated Morehead State 77-44 on Dec. 2 at the Covelli Center in Columbus, Ohio.

The stifling defense of Ohio State held the visiting Eagles to just 25 percent from the floor (13 of 52) and the Buckeyes’ pressure led to 17 turnovers.

“We needed to come out and just compete,” Ohio State sophomore forward E.J. Liddell said. “We didn’t compete at our highest level Sunday, but I felt like this was a good bounce-back game to come out and compete and show what we can really do.”

Liddell led the way for the Buckeyes with 16 points and seven rebounds in the 33-point victory at home.

“C.J. was huge,” senior forward Kyle Young said of Walker. “He brings it for us every game, and we look to him for leadership all the time. The way he competed and in the way he was making it tough on them defensively, and then running our offensive, he did a really good job.”

Morehead State fourth-year junior guard DeVon Cooper opened the second half with a pair of foul shots, but the Buckeyes ripped off a 7-0 streak to extend their lead to 44-29 with 17:01 remaining. The Eagles cut the lead to 12 twice at 44-32 and 49-37, but that was the closest they came after the 15:52 mark.

“I want to be able to consistently shoot them,” Young said of the three-pointer. “In the offseason, I was able to shoot it really well, so it’s just translating it to the games now for me. And just seeing one go in now adds a little confidence, and I hope I can keep that going.”

The Eagles cut the lead to 58-42 with 6:34 left, but the Buckeyes asserted their dominance over the visitors with a 19-0 spurt sparked by a Young slam and highlighted by two three-pointers from junior guard Duane Washington and three treys from junior wing Justin Ahrens. Washington scored 11 points and dished four assists, and Ahrens added nine points.

Cooper scored or assisted on the Eagles’ first nine points, helping the visitors take their only lead of the game at 7-6 with 15:19 until halftime.

Ohio State responded with a quick 6-0 spurt before a bucket by Morehead State fourth-year junior guard K.J. Hunt on a Cooper assist made it 12-9. The Buckeyes and the Eagles exchanged 5-0 runs before Young sparked a 6-0 streak that was capped by four straight points from Liddell to push the Ohio State lead to 23-14.

The Buckeyes took their biggest lead of the first half when Liddell grabbed a Washington miss off the glass and put it back in to make it 30-18. The Eagles answered with back-to-back three-pointers to cut the lead to six, but Ohio State countered with a 7-0 stretch before a triple by sophomore forward Julius Dixon triple cut the lead to 10 at the midway point.

Junior guard Skyelar Potter led the Eagles with 13 points and grabbed six rebounds, and Cooper finished with 11 and a team-high seven boards.

Morehead State head coach Preston Spradlin came away from the loss to the Buckeyes thoroughly impressed with Walker and Liddell, particularly.

“E.J. Liddell had a fantastic game against us,” Spradlin said. “He’s got a great motor; he’s got great hands. He hit some midrange shots today, I think that’s really going to help his game.”

“In general, we were a little more connected on both ends,” Holtmann said. “We shared the ball and moved it a little bit better than what we had. We played through the post better. We still wasted a lot of possessions offensively.”