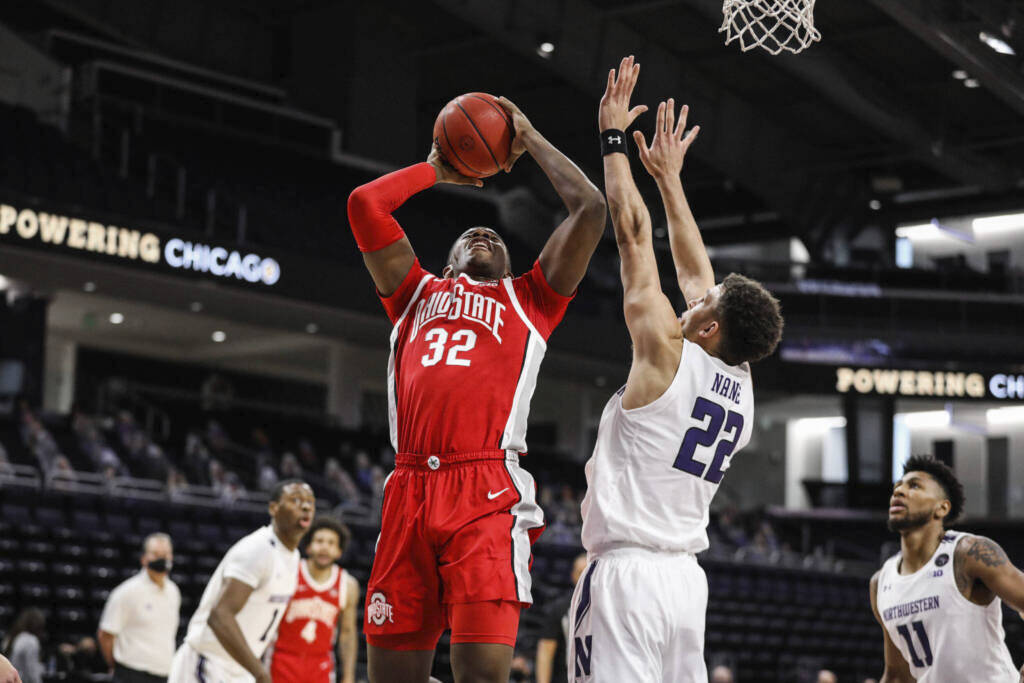 The No. 23 Ohio State men’s basketball team blew a seven-point second-half lead to fall to Northwestern 71-70 at Welsh-Ryan Arena in Evanston, Ill.

After a clutch stop by Ohio State on Northwestern’s final possession, head coach Chris Holtmann drew up a play for junior guard Duane Washington Jr. to drive to his right for the win. Washington Jr. missed the layup and sophomore forward E.J. Liddell had the offensive rebound ripped away from him by Northwestern sophomore guard Boo Buie to end the Buckeyes’ hopes.

“It was a great look, nearly uncontested at the rim, we just didn’t execute, and those things happen,” graduate forward Seth Towns said. “We had a good opportunity to get a rebound with E.J., everything worked out how Coach drew it up; it just didn’t fall for us.”

Young drew a foul while hustling for an offensive rebound, and calmly knocked down both foul shots with 48 ticks until the final buzzer to make it 71-70. Young finished with 15 points and eight boards, while Liddell paced the Buckeyes (7-2, 1-2) with 16 points along with eight rebounds.

“I thought both those guys played really well, and I thought collectively we rebounded it well,” Holtmann said of Young and Liddell. “We rebounded well on both ends, and we’ve got to do that, particularly with some of our lineups where we might be giving up some shooting; we have to do a good job on the glass on offense.”

Young showed great poise by swishing through a contested left-handed hook to tie the game at 68 with 1:23 left, but Northwestern (6-1, 3-0) rose to the occasion at home.

“Our guys were stopping the ball too much; we didn’t move it enough on enough possessions,” Holtmann said. “And we had a good possession there with Kyle, as he finished in the post. We struggled a little bit with some of their traps of E.J., but all in all, we just weren’t moving the ball enough there.”

The Buckeyes led 64-57 with 6:59 on the clock, but they floundered down the stretch against a tough Wildcat team, committing two turnovers and allowing two dunks in a 1:25 span.

Following Ohio State’s strong start to the second half, the two teams battled back and forth until the visiting Buckeyes ripped off an 8-2 run to take a 62-55 lead with 8:02 to play. Northwestern rallied on a 7-1 run to tie the game at 48 with 12:30 left on a Buie three-pointer.

After the Wildcats responded to an 8-0 Buckeye run with a 5-0 spurt of their own, Ohio State answered with five straight points to push its lead to 47-41 with 15:47 left on Young’s second and-one of the second half.

Northwestern broke a 34-34 tie to open the second half, but the Buckeyes bounced back with an 8-0 spurt with a triple from Washington Jr., a putback by fourth-year junior wing Justice Sueing and an and-one putback by Young to set the second-half tone.

Although Ohio State outshot Northwestern from the floor, three-point range and foul line in the first half, the solid Big Ten squads were locked at 34 at halftime. The Buckeyes committed eight first-half turnovers leading to 16 Wildcat points.

“But in second half, guys did a great job, we had two turnovers and we got better shots, particularly early. We didn’t finish, but guys certainly did a better job taking care of the ball during the second half.”

The Buckeyes began the game hot with four different players hitting their first shot as part of an 8-0 start, but the Wildcats responded with a 14-2 run led by 12 points and one assist from junior forward Miller Kopp to take a 14-10 lead just under seven minutes into the game (13:03).

Ohio State and Northwestern battled back and forth throughout most of the first frame, with Towns providing 11 points on 4-of-4 shooting with three triples in 11 minutes off the bench across the game’s first 20 minutes.

Kopp paced the Cats with 14 first-half points and three steals, and the sharpshooter finished with a game-high 23 points. Buie posted 14 points and five assists after scoring just four points with two dimes in the first half.