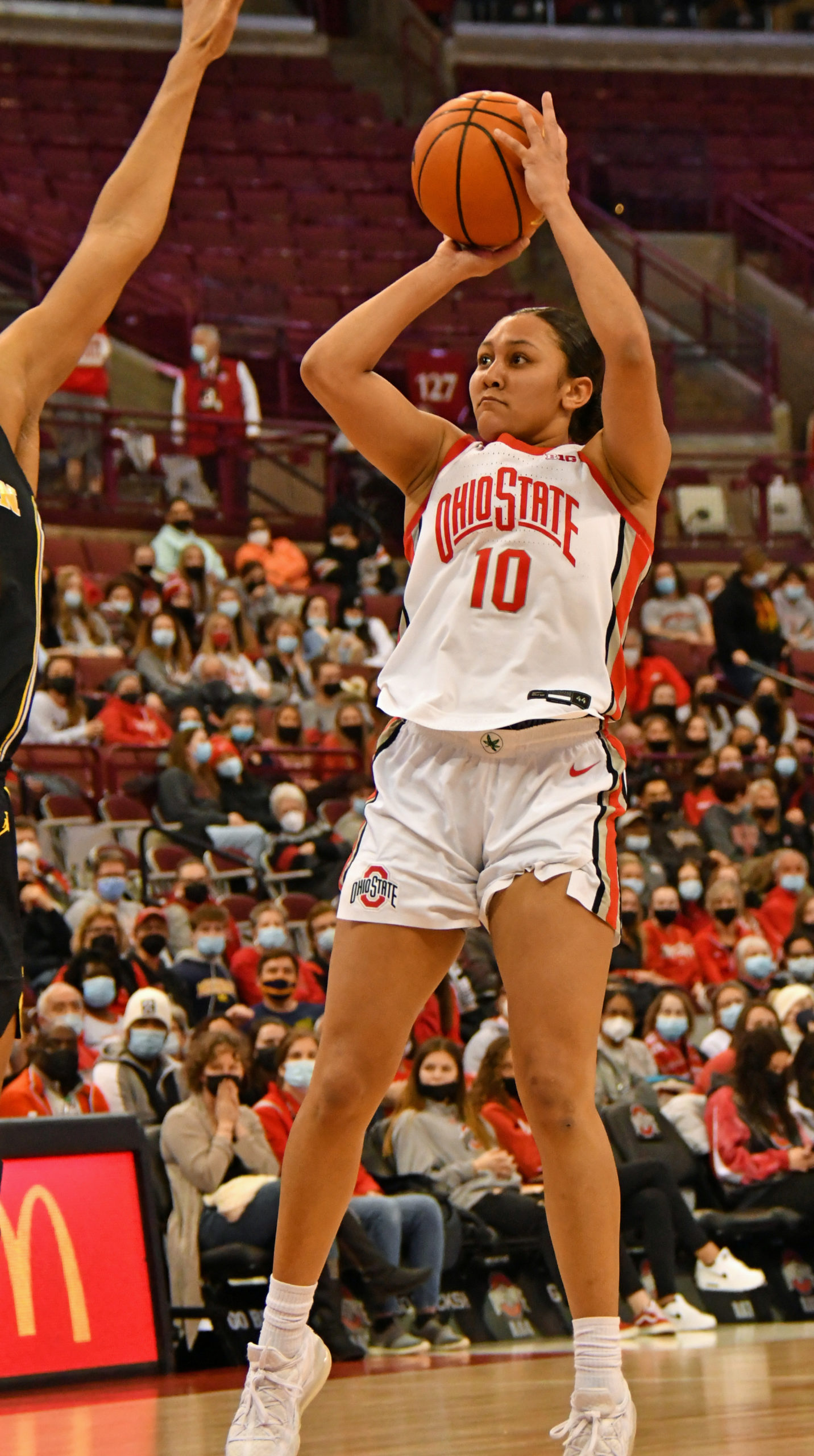 After a pair of missed layups in the first five minutes, it became clear it might just be one of those nights for Ohio State.

The Buckeyes (15-4, 7-3 Big Ten) came out flat, surrendering an early 13-2 lead to visiting Michigan (18-2, 10-1), and the Wolverines never looked back, taking a 77-58 win home to Ann Arbor on Thursday in one of Ohio State’s worst shooting performances of the season.

Ohio State’s red-hot offense took a step back early in the contest, starting just 1 of 8 from the field as Michigan jumped out to that 13-2 lead nearly five minutes into the game.

Three-pointers from senior guard Taylor Mikesell and junior guard Jacy Sheldon helped close the gap, 15-8, but the Wolverines went on to lead 21-10, eight of which came from forward Naz Hillmon. This sparked a 6-2 run by the Buckeyes to end the quarter, capped off with a basket from graduate forward Tanaya Beacham to make it 23-16.

Michigan then increased its lead to 29-16, holding Ohio State scoreless for over four minutes to begin the second.

Sheldon broke through with a basket at 5:48, but it began a combined scoring drought of nearly three minutes before Michigan forward Emily Kiser connect on a basket, and Sheldon responded with a triple to make it 31-21 with 3:10 remaining in the half.

The Wolverines began to put things out of reach late in the half, however, knocking down a pair of free throws and connecting on their last two baskets to lead 38-23 at the break. In the first half, Ohio State was held to just 26.7 percent from the field while turning the ball over six times, compared to just five assists.

Ohio State’s woes continued in the second half, as the Wolverines forced four turnovers in just 1:20 of play to begin the third quarter as Michigan increased its lead to 42-23 courtesy of some impressive execution in transition. The Buckeyes finished the game with 16 turnovers, their sixth-most this season.

In total, Michigan held Ohio State to just 13 points in the third frame, increasing its lead to 63-36 by the end of the quarter as the Buckeyes could do little to stop the Wolverines or respond on the other end.

The Buckeyes outscored the Wolverines 22-14 in the last 10 minutes for the 77-58 final in which Michigan led by as many as 34 points.

Sheldon led the Buckeyes with 15 points and sophomore guard Rikki Harris led with six assists. Hillmon led the Wolverines with 20 points on 7-of-10 shooting and pulled down 12 rebounds for a double-double.

The Wolverines shot 26 of 53 (49.1 percent) from the field while holding Ohio State to its third-worst shooting percentage of the season at 37.3 percent. The Buckeyes hit just six 3-pointers, their second-fewest of the season.

Ohio State will return to the court Monday, traveling to take on Iowa with a 9 p.m. tip. The game can be viewed on Big Ten Network.