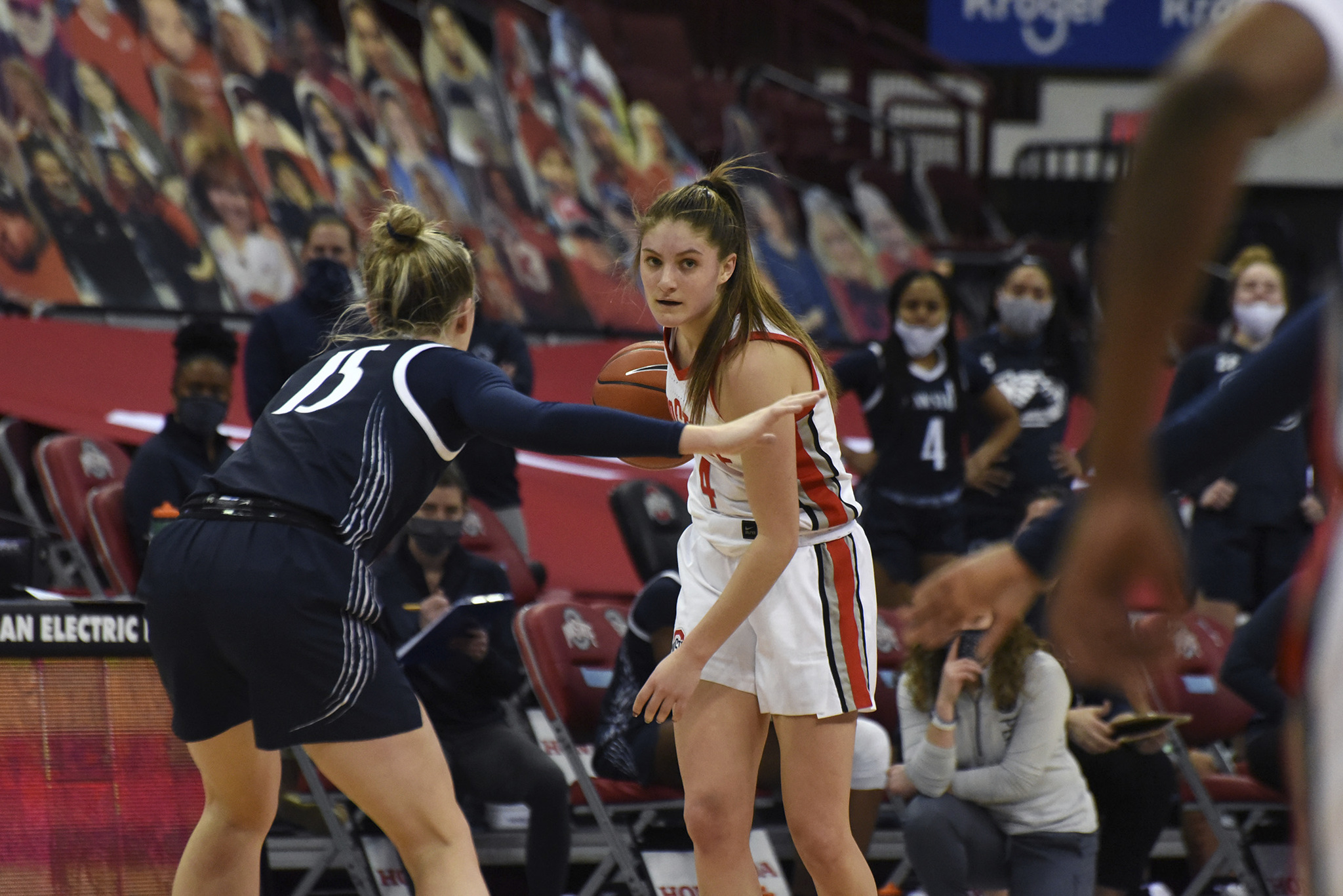 Ohio State had absolutely no answers for star forward Naz Hillmon, who broke a Michigan program record with 50 points in the game.

It was a Herculean effort from the junior forward that led the Wolverines back from a 12-point fourth quarter deficit all the way to a lead with 3:07 to play, their first lead since the first quarter.

“She’s an outstanding player,” Ohio State head coach Kevin McGuff said. “One of the, certainly, best in the country, and just really hard to deal with.”

From there, the Buckeyes kept battling back, tying the game at 71 and 73 points apiece, the latter coming with 1:58 to play. Hillmon then split a pair from the free-throw line to take a 74-73 lead, it was time for an Ohio State player to become a hero.

That was sophomore guard Jacy Sheldon, who buried a three in transition to put the Buckeyes back up two, 76-74, with 45 seconds to go. Hillmon was then stripped by senior guard Braxtin Miller and sophomore guard Madison Greene hit her shots at the line to go up four.

“That play was started with defense, and that was a great pass, so that was obviously a huge play,” Sheldon said. “I think collectively, we made a lot of big plays leading up to that, that definitely led to the outcome tonight, and it’s always good beating the team up north, so that’s always fun.”

Still, the game wasn’t over. Hillmon converted an and-one to make it a one-point game, and after Miller split her free throws, Ohio State led 79-77 with 10.4 to go.

But Michigan sophomore guard Maddie Nolan couldn’t hold on to the following in-bound pass, turning it over and giving the ball back to the Buckeyes. Sheldon hit both her free throws, and Ohio State escaped with the 81-77 victory.

“Really just showed a lot of toughness there down the stretch,” Ohio State head coach Kevin McGuff said. “We beat a great team today, they’ve been playing excellent basketball this year, they have a special player in Naz Hillmon obviously, but really proud of our team with just how hard we played, just some really tough plays down the stretch and just some huge plays to come away with a great win.”

Early in the second half, Ohio State started to pick up some momentum, going on a 10-0 run to take a 51-39 lead in the third quarter, but, with 5:46 to go in the frame, junior forward Dorka Juhasz earned her fourth foul, taking her out of the game until 48 seconds into the fourth quarter.

While that gave the Wolverines a window to come back, the Buckeyes kept their foot on the gas, taking a 66-54 lead into the final frame.

But Michigan found some big momentum to start the fourth quarter thanks to Hillmon, who carried the Wolverines throughout the entirety of the contest. Hillmon, who also finished with 16 rebounds, made two layups and three free throws to help cut the Ohio State lead down to 66-65 as part of a Wolverine 11-0 run.

Ohio State finally broke the shutout fourth quarter with a free throw by Greene with 4:50 to go. That 11-point swing also included a free throw made thanks to a technical foul on McGuff for arguing with an official.

“We were just seeing different things,” McGuff said on the technical. “It happens, and I’m actually just reacting to what I see, and the referee is just seeing something different. All good, part of the game.”

In the first half, it was a back-and-forth battle that saw Ohio State take a 37-33 lead into halftime. The Buckeyes went up by as much as 14 points in thee second quarter thanks to a 22-6 scoring run, but Michigan ended the half on a 12-2 run of its own to cut the deficit down to four.

The Wolverines came back in the first half thanks to Hillmon, who scored nine straight Michigan points in the final 3:16 of the first half. She ended the half with 19 points and five rebounds.

Juhasz led Ohio State in the opening half with 10 points, five rebounds and a pair of blocks on 4-of-6 shooting.

Only four Michigan players scored in the game, with guard Akienreh Johnson (14 points), guard Amy Dilk (eight) and Nolan (five) making up the other 27 points that Hillmon did not score.

The Buckeyes were without junior forward Aaliyah Patty, who had started all eight games this season and is fourth on the team with 11.9 points per game. She was out with a shoulder injury and is day-to-day, according to an Ohio State spokesman.

Starting in her place was fifth-year senior forward Tanaya Beacham, who finished with 10 points and three rebounds.

Next up, Ohio State stays at home with another key ranked matchup, this time against No. 7 Maryland. That game takes place at 7 p.m. Monday, and can be watched on ESPN2.