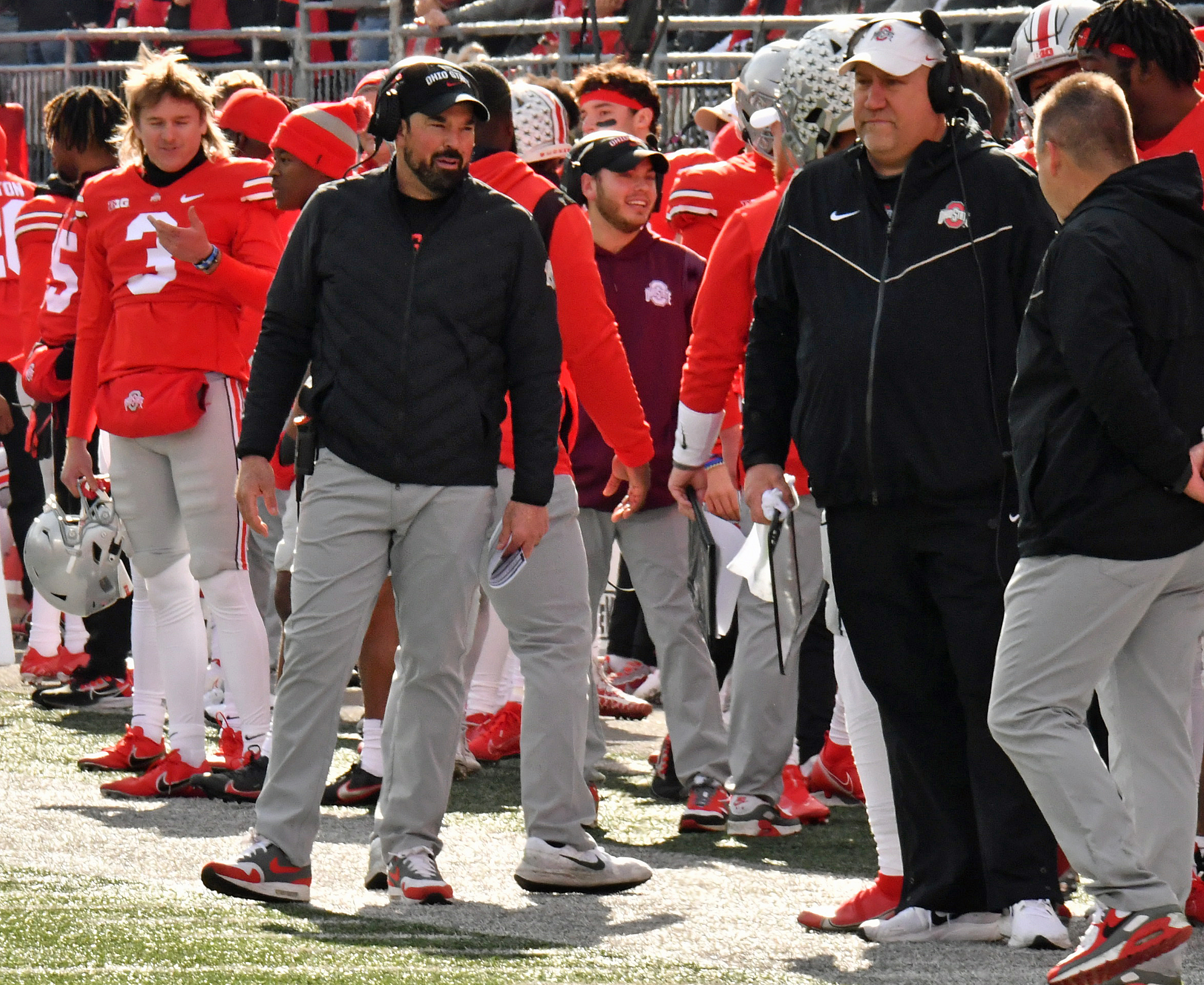 Ohio State head coach Ryan Day told assembled media Jan. 31 that as he was sorting through defensive coordinator candidates before eventually hiring Oklahoma State defensive coordinator Jim Knowles, he had established a list of about seven coaches who he thought would fit the billing for what Ohio State needed as it moved on from Kerry Coombs, who vacated the role after only two seasons.

Day wanted an experienced coach with talent as both a talent recruiter and a developer of that talent. He wanted someone with a distinct system that fit what the Buckeyes have on that side of the ball, and a system that everyone could buy into. More than anything, he wanted a head coach for the defensive side of the ball, just like he wants for special teams, recruiting, and indirectly for the offense, which is considered his forte.

And as he worked his way down the list, no one checked off more boxes than Knowles, who Ohio State outbid several other top programs to land as the new head coach of the defense, in Day’s words.

“Going through the whole interview process, there were probably seven guys that I recognized as good fits in terms of what we think schematically, and when I started to cross off some of the names and check the boxes off, Jim was the guy,” Day said. “I thank Gene Smith for allowing me to go get the best, he never asked a question on it, he just said to go get whoever I think is the best defensive coordinator for Ohio State this year. I really appreciate him, president Kristina Johnson and the board for allowing me to do that because that’s not the case at most places. I think we got the best.”

In Knowles, Ohio State feels it has secured all of that. He brings to Columbus several decades of experience both as a defensive coordinator and as a head coach, he developed one of the nation’s best defenses in Stillwater, and his recruiting – while not yet tested at the blue blood level – was impressive enough to assuage any concerns Day may have had.

“Jim is very intelligent, former head coach, he’s been through it before. He told me he’s put in his 10,000 hours, really poured his time and his heart into this game as a profession and this is what he does,” Day said. “We have yet to put the defensive system in yet – that’s going to take a little time to be thorough and done right – but he’s very intelligent, understands the game, he’s experienced and I’m excited to get to work with him over the next couple of months heading into spring practice.”

The Buckeyes bucked the national trend in their process for hiring Knowles, too. While many teams rushed to get new staffs in place ahead of the mid-December early signing period to avoid any confusion for recruits, Ohio State went through a longer process to make sure that it was landing the right fit, both from the personal perspective and schematically.

“There was a lot of conversation with Jim,” Day explained. “By the end, I asked to do a couple more FaceTimes and a couple more Zooms and he probably was wondering what else I could want to see, but I wanted to do that because I knew how important this hire was. At the end of the day I was really just looking for a head coach of the defense and certainly his background and all the people who have worked for and with him have such great things. You watch the film of how his team plays and they play hard, they have a system, they have answers and they’ve done a great job developing.

“When you combine all of those things, all the people that have worked with him and for him, by the end as I was going through all the candidates it seemed like he was the best fit. At the end of the day, we had some common ground but at the end of the day, I’m going to run the offense (and he’s going to run the defense). When this thing is running well, there’s a head coach of the defense, recruiting, special teams and then I’m heavily involved with the offense. If those things aren’t happening and I’m being taken away from the offense, then the way this structure is built isn’t being optimized.”

As for what Knowles’ defense will look like on the field, Day was a bit more noncommital. He spoke positively about the four-down linemen looks that Ohio State has deployed for years – not terribly different from what Knowles used at Oklahoma State, though the Leo position would be a change for the Buckeyes – and the one-high safety look that Ohio State has used since Jeff Hafley’s brief run as DC in 2019, but said that many of those decisions will come down to personnel, and will be the decision of Ohio State’s new-look defensive staff.

“Jim starts in a four-down look and can change from there, he really attacks the offense on how they’re doing things. That’s just how his defenses play. When you look at the personnel we have right now on defense, it’s going to fit really well with what he’s going to do heading into next year.

“We’ve always felt like we’ve been able to recruit really good defensive linemen here and Larry (Johnson) has done such a great job of that. We want to start with four down linemen. In 2019 I thought we did a really good job of going through and putting the one-high safety defense together, and that year was excellent. Then over the last couple of years, we’ve had some issues here and there, but when it came to making this decision moving forward, we still wanted to start with that foundation, but at the end of the day, the goal is to put our guys in position to be successful.

“Finding a way to do that is the key to college coaching. I think it’ll look similar to what it did at Oklahoma State – that will be up to the defensive staff to determine – but there will be some other things too that guys on our team do well, and the key is trying to figure out how to maximize those skill sets. That’s starting now, but I know that journey is going to take a lot of twists and turns.”

Don’t expect minor tweaks or stopgap solutions, though. Day felt that he tried that approach in each of the last two seasons, and though he gave it plenty of consideration as a solution moving forward, ultimately, he decided that a fresh start was needed for the Buckeyes as they move forward into 2022 and beyond. In Knowles, and even in new assistants Perry Eliano (safeties) and Tim Walton (cornerbacks), Ohio State has its fresh start.

The next step, in the head man’s eyes, is developing a system that everyone in the Woody Hayes Athletic Center can understand and believe in.

“I considered just tweaking the defense, considered a lot of things, thought long and hard on it and it weighed heavily on me, but I felt like a fresh start was the right thing to do. We had kind of just been tweaking it the last couple of years and bringing a guy in, moving a piece over here, and I really wanted to start fresh. I wanted to have a system in place so that when something goes wrong there’s an answer in the system and everyone believes in the system.”