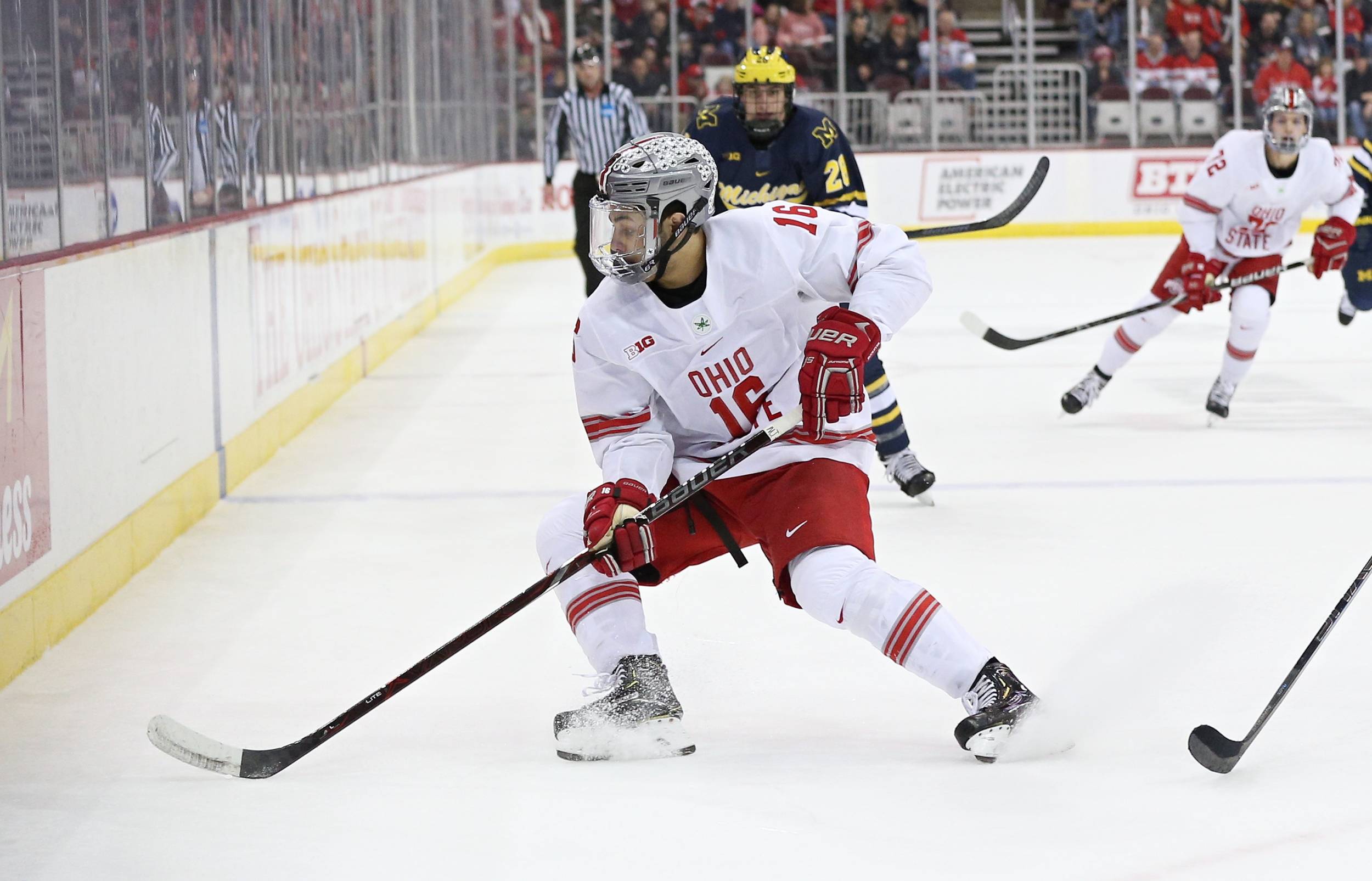 The weather outside was frightful but inside Value City Arena on Saturday the ice was heated for the second night of the Ohio State-Michigan rivalry.

The storm that dropped three to five inches of snow on central Ohio throughout the day may have kept some of the announced crowd of 9,857 off the streets but those who ventured were rewarded with a gem of a matchup between schools that don’t like each other.

It was appropriate then that the winning and insurance goals were scored by Michiganders but with a twist – freshman Quinn Preston and junior Ronnie Hein play for the No. 4 Buckeyes as they helped propel them to a 4-2 comeback win.

OSU has not lost two straight this season and are 8-1-2 on Saturdays compared to 5-4-2 on Fridays.

“We’ve talked about it already,” Ohio State coach Steve Rohlik said. “We’ve got to turn things around on Fridays and try to be better on Fridays.”

Junior Tanner Laczynski and junior defenseman Wyatt Ege also scored, and sophomore Tommy Nappier made 26 saves to improve his record to 8-1-2 this season.

Michigan got goals from Will Lockwood and Jimmy Lambert, and Hayden Lavigne stopped 18 shots.

Preston, from Trenton, Mich., broke the 2-2 score at 13:03 of the third period. Senior Mason Jobst entered offensive zone and dropped the puck to the trailing Preston atop the right circle. That’s when Preston dragged the puck to get around defenseman Joseph Cecconi before scoring his fourth goal.

He then celebrated in front of the U-M goal and paid for it later when he was hit with a vicious elbow to the head that went uncalled while the Wolverines had Lavigne pulled for an extra attacker beginning with 2:16 left in regulation.

U-M nearly tied it with 1:50 to go but a backdoor one-timer by Lockwood hit the post.

OSU had allowed extra attacker goals to Mercyhurst and Michigan State on consecutive weekends leading to this series but Hein, a Chelsea, Mich., native, got OSU off the hook with 24 second left when he stripped the puck from Michigan defenseman Quinn Hughes in the neutral zone and scored his eighth goal into an empty net.

“After giving up a couple of goals, that was the emphasis this week,” Ege said. “We’ve got to be able to close out games. We did it tonight.”

The fireworks continued after the final whistle when Michigan’s Griffin Luce jabbed at the Buckeyes, nearly precipitating a brawl. He received a postgame 5-minute major for slashing, as if it mattered.

“I think it came down to us seeing the bigger picture and being the bigger man out there,” Laczynski said. “They can do their things but at the end of the day we’ve got to worry about us.”

The score was 1-1 in the third period when a pair of unlikely scorers made it 2-2 in rapid order.

First, Lambert gave the Wolverines a 2-1 lead at 8:48 with his first goal of his career in his 18th game. Luke Morgan had the initial shot that Nappier made the initial save at the near post, but he left a juicy rebound and Lambert whipped a shot.

The goal was being announced when Ege made an individual effort to knot the score at 9:16 for his first goal in two seasons with the Buckeyes.

He maintained possession even while being hounded as he kept the puck in the zone. He wheeled toward the net and blasted a rising shot.

“I’m just happy I scored,” he said. “Going last year without a goal and Christmas break I still hadn’t scored, I was just happy to put one in the back of the net finally.”

The frenetic third contrasted with the slow start of the game.

There was little action, only 13 shots on goal (seven by the Buckeyes) and one penalty apiece in the languid first period.

The action and intensity increased in the middle period as each team scored once on the power play for a tie at 1 entering the third period.

Before that happened, the goalies shined. Lavigne stopped Jobst, OSU’s points leader, twice while at the other end Nappier had to withstand a flurry of activity seven minutes into the period.

Friday, OSU had the chance to extend a 1-0 lead by having a two-man advantage for two minutes. They did not score although Laczynski did hit the pipe.

It was a different story this time. Laczynski was in the left circle when Jobst dished the puck to him. He did not miss. Laczynski lasered a shot to the far upper corner for his seventh goal.

“I was lucky enough to get a perfect pass, the right spot and a great screen by Dakota (Joshua) in front,” he said. “Head down, shoot the puck.”

What should have been a momentum-builder evaporated when junior Sam McCormick was called for slashing at 14:08 and Lockwood got the equalizer 28 seconds later.

OSU outshot the Wolverines 11-9 to set up the wild final period.

The Buckeyes play at Penn State on Friday and Saturday.