Men’s Hockey: Big Ten Selects Dobeš As Co-Freshman and Goaltender of the Year 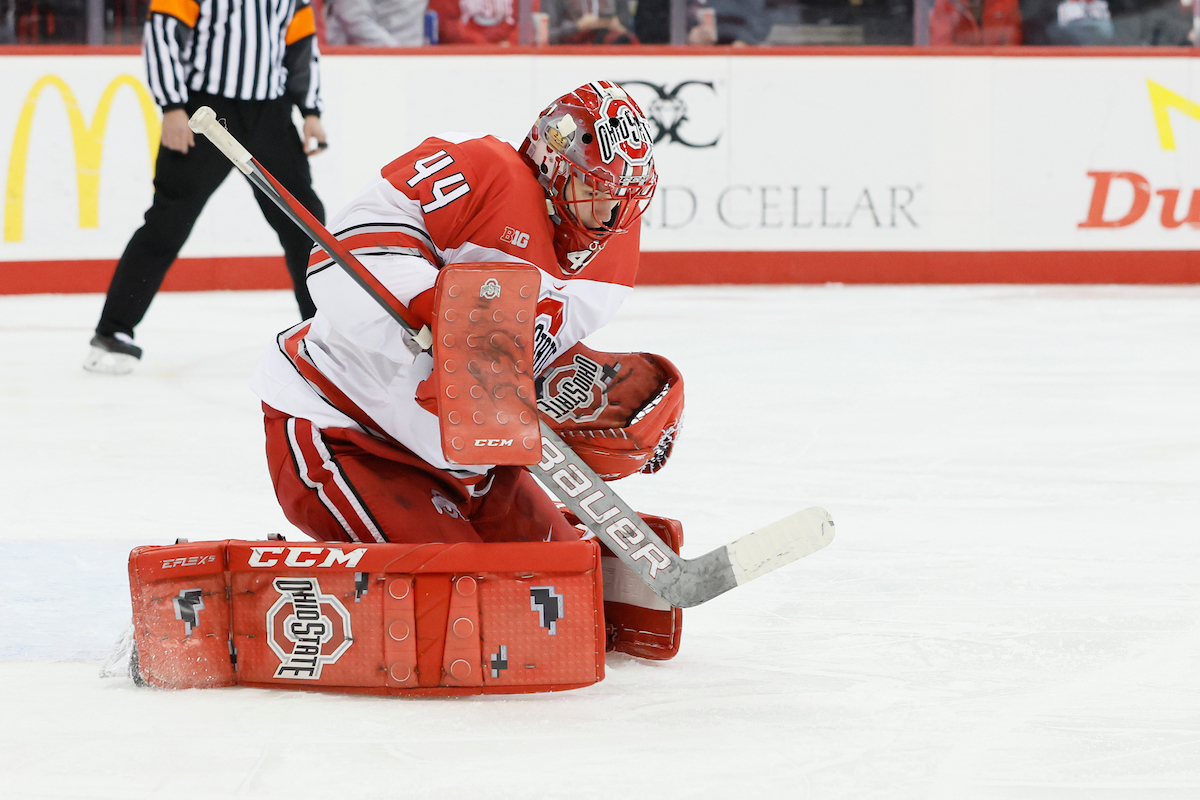 Jakub Dobeš is the 2022 Big Ten co-Freshman and Goaltender of the Year, the conference announced Tuesday. He also was named to the All-Big Ten first team.

Dobeš is the first Buckeye in program history to win Big Ten Freshman of the Year. He became the school’s second Goaltender of the Year after Tommy Nappier won the award in 2019. According to the league’s press release, Dobeš is the second freshman to win the league’s goaltending honor since Minnesota’s Eric Shierhorn in 2017.

Dobeš, a Montreal Canadians draft pick, played in 35 games (34 starts) for Ohio State this season, collecting a 21-11-2 record with a 2.26 goals-against average. His .934 save percentage ranks third nationally and first in the Big Ten, and he is tied for sixth in the NCAA in goalie wins (21) — a total that ranks fifth all-time for a Buckeye in a single season. Dobeš 1,086 saves lead the nation and are second all-time in program history.

Ohio State freshman Georgii Merkulov earned first-team All-Big Ten honors with Dobeš, while freshman defenseman Mason Lohrei was an honorable mention. The trio of Dobeš, Merkulov and Lohrei make up half of the conference’s All-Freshman team. Dobeš was also a finalist for the Big Ten Player of the Year award and Steve Rohlik was a finalist for Big Ten Coach of the Year.

Merkulov has a Big Ten-best 20 goals, which leads all NCAA freshmen and is tied for eighth among all skaters. He paces the Buckeyes with 34 points. Merkulov’s .56 goals per game average rank 10th nationally and second in the league, while his .94 points per contest are fifth in the conference. The Ryazan, Russia, native, collected a point in 24 of Ohio State’s 36 games, with nine multi-point games, including four two-goal nights.

Lohrei, a Boston Bruins draft pick, leads the Buckeyes with 25 assists and is second with 29 points in 31 games. Despite missing the final five games with an injury, Lohrei ranks ninth in the NCAA and second in the Big Ten with .81 assists per game — the third-best number from a defenseman and first among freshmen. The Madison, Wisc., native has the most assists by a Buckeye defenseman since Doug Andress had 27 helpers in 2004.

Ohio State fifth-year senior Grant Gabriele won Ohio State’s Big Ten Sportsmanship Award. He played in 37 games this season and contributed 20 points from five goals and 15 assists, along with a plus-12 on-ice rating. Gabriele has skated in 124 games for the Buckeyes, recording 12 goals, 37 assists, 50 points and 152 shot blocks in his decorated career.

The No. 16 Buckeyes await a possible NCAA bid as Rohlik and his team will need help to reach the postseason. A 16-team field will be announced at 6:30 p.m. on Sunday on ESPNU.