Men’s Golf: Moldovan And Hoag Qualify For The 2022 U.S. Open 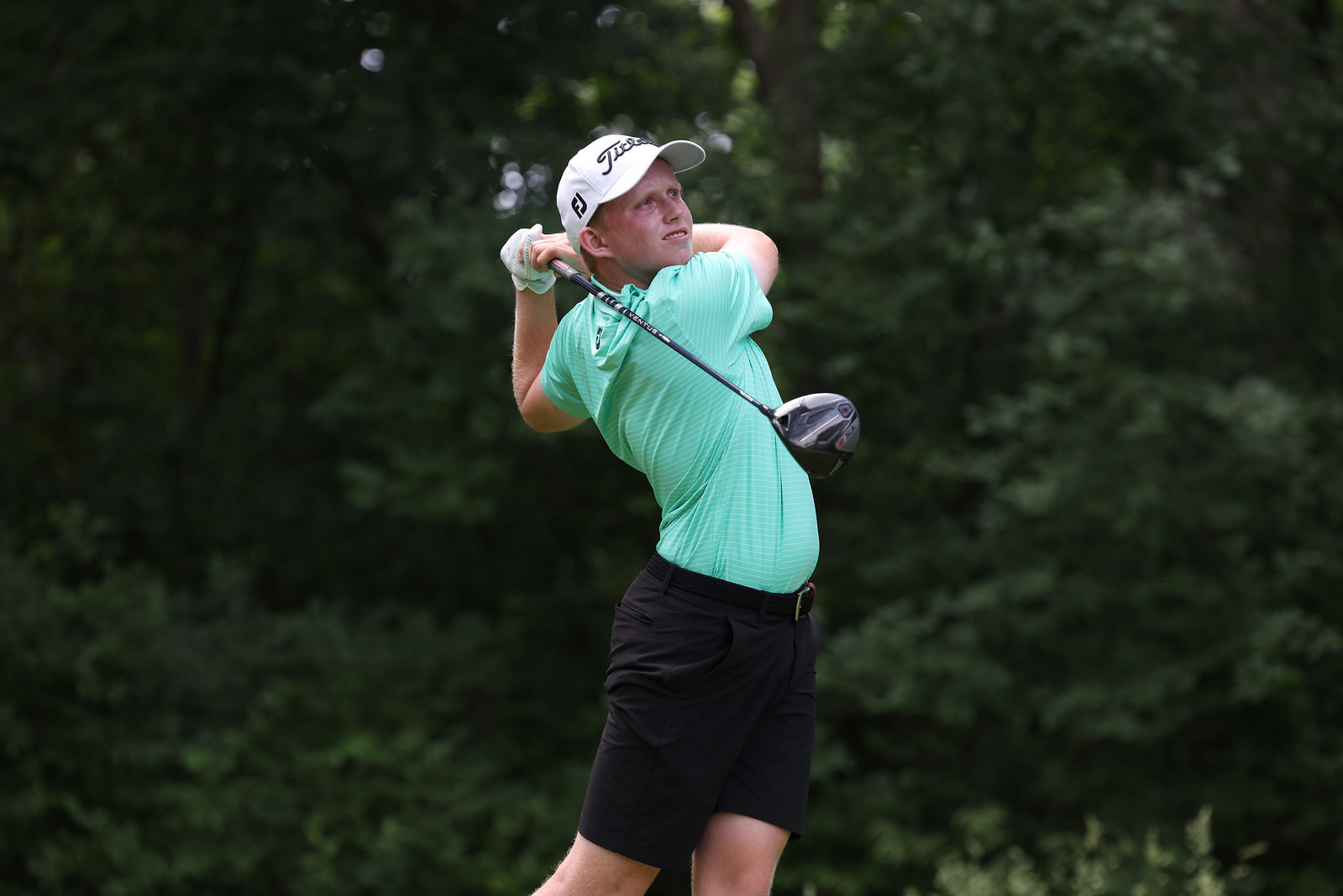 Ohio State rising junior Maxwell Moldovan and former Buckeye Bo Hoag — now on the professional tour — punched their tickets to the 2022 U.S. Open on Monday at the U.S. Final Qualifier at the Springfield Country Club in Springfield, Ohio.

Moldovan is the first Buckeye amateur to make the U.S. Open since Will Grimmer qualified in 2018 at Shinnecock Hills in Southampton, N.Y. Grimmer, then an Ohio State junior, carded rounds of 73 and 72 to put himself safely within the cut line at 5-over par.

“It’s a surreal moment for me,” Grimmer told Golf Digest after he made the cut. “I felt like I’ve been much calmer this week than I was back in 2014. I’ve been very in the moment, been able to handle my nerves.”

Moldovan birdied six of his first 11 holes to take the course lead at 6-under par, eventually posting a 4-under 66 in the morning. In the afternoon, he bogeyed his first hole but birdied four of his next 10 holes to create more breathing room. Although he suffered a few bogeys in the final opportunities, Moldovan claimed his first trip to the U.S. Open with a second-round 69, finishing tied for third at 5-under.

The Uniontown, Ohio, native was a unanimous first-team All-Big Ten and PING All-Region team member for his performance at Ohio State this season. Moldovan averaged 71.03 strokes over 36 rounds and 12 events — the lowest scoring average for a Buckeye since 1980. He also led the team with 14 rounds in the 60s and 23 rounds at par or better.

In 2021-22, Moldovan claimed his first three collegiate victories as a sophomore, winning the NEXUS Collegiate, Southern Invitational and the Robert Kepler Intercollegiate. Since arriving in Columbus, hoisting a tournament trophy had been Moldovan’s dream, and he didn’t have to wait long to experience that moment.

“He wanted to win in college, especially that first season,” Moseley told BSB. “I mean, he desperately wanted a win. The summer after his freshman year, he had a big-time performance and won the Southern Amateur. That was awesome for his development, and he carried that with him.

“Max didn’t have to wait long to get that first collegiate win,” Moseley said. “He won right away in the Bahamas, where some of the best players in the world play on the PGA Tour. He built upon that. Max had a hunger and a fire that continued to build within him during the season.”

That fire didn’t extinguish after Ohio State’s season came to a close at the NCAA Championship at Grayhawk Golf Club in Scottsdale, Ariz. — where Moldovan carded rounds of 71, 76 and 74 to finish at 11-over par and a tie for 62nd place.

In fact, the flames grew higher. Moldovan told BSB after the NCAAs that his summer would be filled with improvement, especially with his confidence on the golf course.

“I struggled with putting together a consistent mental approach round-to-round,” Moldovan said. “That’s something I want to improve before next fall. I don’t want to have rounds where I lose confidence. I want to believe in my ability to chip around the green and make putts. I hope I’ll get my confidence back and bring that to the team next season.”

With the U.S. Open qualification and plenty of golf left to play this summer, it’s safe to assume Moldovan’s confidence is as high as its been as a collegiate athlete. But the challenge he presented himself of building consistency still exists, and he will find out in two weekends whether or not he’s up to the task.

Hoag took a similar route to Moldovan to reach his second consecutive U.S. Open. He played the opening nine holes at even par and then made four birdies on the second nine to card a first-round 67.

In the afternoon, Hoag sunk an eagle at the par-5 second that put him inside the cut line, but he bounced back and forth throughout the round. A closing birdie on No. 17 and a par on No. 18 put him at a 4-under par 69, which qualified him for the U.S. Open.

Hoag turned pro in 2011 and played in the 2021 U.S. Open. He did not make the cut last year. Hoag has one professional title on the Korn Ferry Tour in 2019. Last week, he played in the Memorial Tournament in Dublin, Ohio, but failed to make the cut.

Three other Buckeyes competed Monday at Springfield Country Club. Rising junior Jackson Chandler missed the playoff by one shot. He fired a morning-round 72 and carded a 5-under 65 in the afternoon — which tied the low round of the day for all golfers — but could not secure a qualifying spot.

Incoming freshman Joe Wilson IV and 2019 Ohio State graduate Daniel Wetterich finished at 8-over par. Wilson made four birdies in his second round and finished with a 1-over 71.

MOLDOVAN AND HOAG HEAD TO BROOKLINE

The 122nd U.S. Open will occur at The Country Club in Brookline, Mass., from June 16-19. Moldovan will compete with amateur status, while Hoag will participate as a member of the Professional Golf Association.