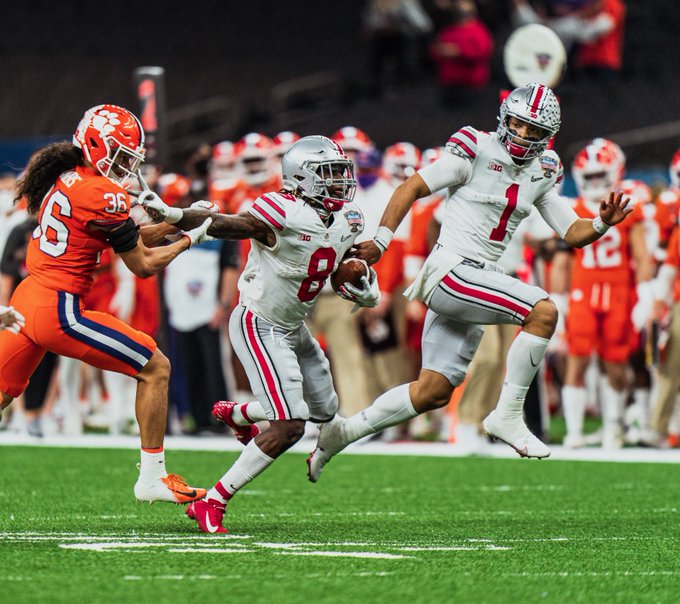 Ohio State got its revenge against Clemson in the Sugar Bowl with a 49-28 win over the Tigers on Jan. 1 to move on to the College Football Playoff national championship game.

The Buckeye Sports Bulletin staff awarded Buckeye Leaves to a handful of the top performers from the Buckeyes in the dominant effort.

“There are so many names that could be picked in what was a remarkable performance from Ohio State top to bottom. But the player who has continued to blow me away the most is Trey Sermon, who had yet another monster day for the Buckeyes when they needed him most.

“After his historic showing against Northwestern, Sermon again was outstanding, rushing 31 times for 193 yards and a score. He also was a major factor in the pass game, catching four passes for 61 yards.

“While Justin Fields was certainly the X-factor for Ohio State in the historic semifinal win, Sermon continued to be a nightmare to deal with, something I would have never expected even three weeks ago.”

“Last year, Chris Olave’s sophomore season ended horribly, with him shouldering the blame for a miscommunication with quarterback Justin Fields that ended in an interception to cap the year with a loss to Clemson.

“Olave made up for his mistake tenfold in Ohio State’s 49-28 victory over the Tigers. The standout junior receiver reeled in six receptions for 132 yards and two touchdowns. His first touchdown came from 9 yards out to extend the Buckeyes’ lead to 28-14 in the second quarter. Olave’s second score was a 56-yard bomb from Fields that pushed the lead to 42-21 in the third frame.

“Another player who was extremely worthy of a Buckeye leaf for his performance in the Sugar Bowl was Justin Hilliard. The sixth-year senior linebacker made plays all over the field, recording eight tackles (six solo), including one tackle for loss, and one fumble recovery.”

“Although he suffered an apparent rib injury on a targeting penalty in the second quarter, quarterback Justin Fields had one of the best performances in Ohio State bowl history. He threw for a career-high 385 yards and tied a school single-game record with six touchdowns compared to just six incompletions.

“Fields’ 385 yards passing was also an Ohio State bowl record, passing Troy Smith’s 342 yards in the 34-20 win over Notre Dame in the 2006 Fiesta Bowl. No quarterback in school history had thrown more than four touchdowns in a bowl game, either, which is why he earned the game’s offensive MVP award.

“At the time of the injury, I wondered if he’d be able to finish the game. He was wincing after throws and when he handed the ball off. But by the time he threw his sixth touchdown, a 45-yarder to wide receiver Jameson Williams with 14:03 remaining in the fourth quarter, I had forgotten he even took a nasty hit.”

“There are quite a few players who deserve some recognition after Ohio State’s stunning blowout victory of Clemson in the College Football Playoff semifinal, but none are more important than the big boys up front on the Ohio State offensive line. After a year of ups and downs, and with starting guard Harry Miller out with COVID issues, the Buckeye offensive line paved the way for everything Ohio State was doing on offense against the Tigers.

“In the running game, the interior of Ohio State’s offensive line got whatever it wanted. Sermon put up 193 yards and looked dominant in his own right, certainly, but he did so with the benefit of some pretty massive lanes up front. Wyatt Davis was the star, as he has been all season, but Josh Myers and Matthew Jones deserve plenty of credit too.

“Even more impressive is the passing protection that the Buckeyes showcased. Against one of the best blitzing defenses in America, Ohio State kept Fields upright pretty much all game, passed off blitz pickups with ease, and shut down a very good Clemson front seven. Ohio State needed a clean pocket for Fields to win, and the front five provided that all day.”