In Transferring To Ohio State, Josie Vondran Took Her Chance To Return Home 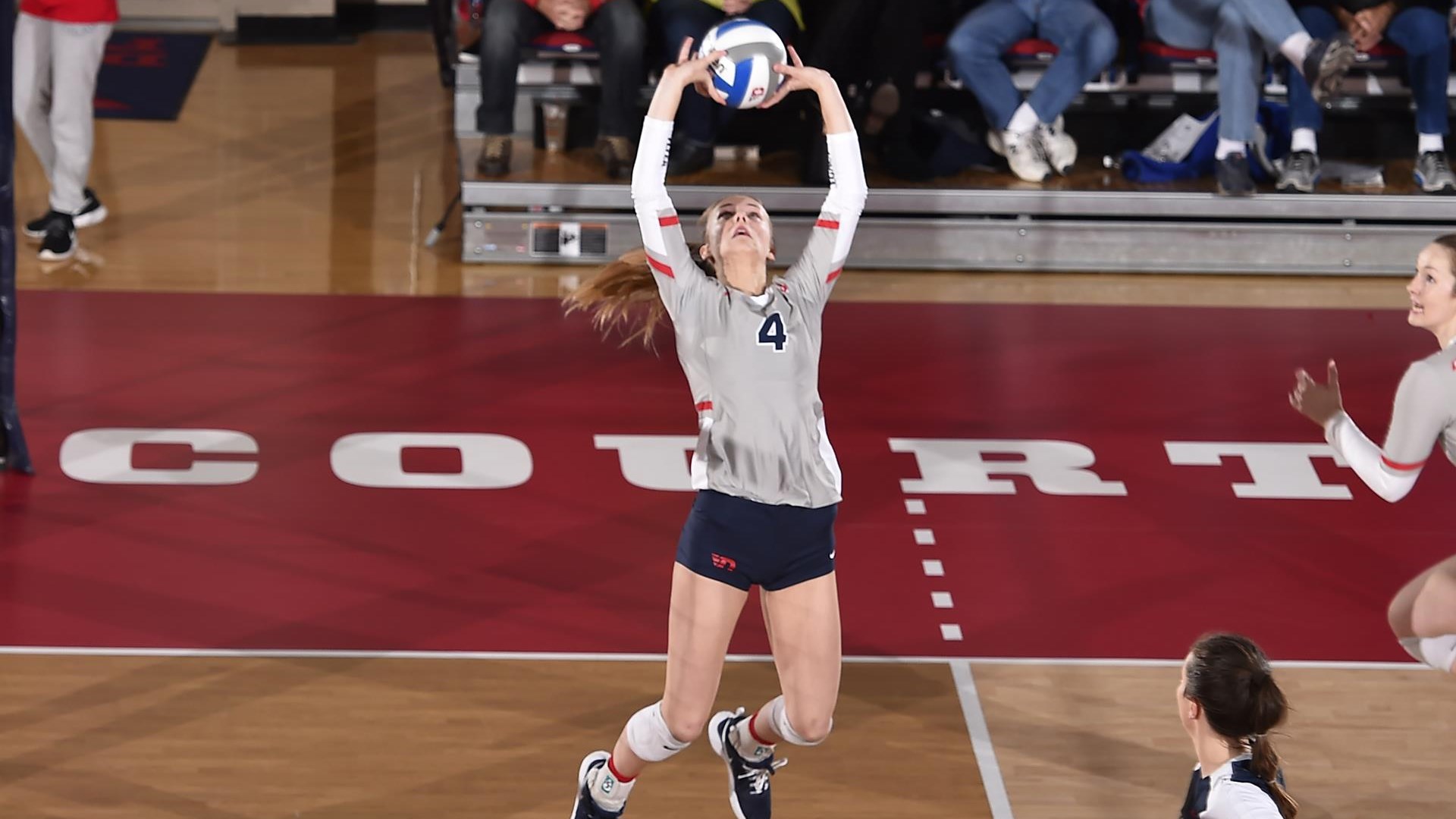 Editor’s note: This story was originally printed in the June edition of Buckeye Sports Bulletin

On Nov. 24, 2019, Josie Vondran and the Dayton Flyers women’s volleyball team knocked off top-seeded VCU in the Atlantic 10 Conference tournament to take home the conference title in four sets. Vondran, a sophomore from Bishop Watterson High School in Columbus, led the team in assists with 27. It was the second time in as many years that the Flyers had hoisted the conference trophy.

Three months later, Vondran entered the transfer portal, and she did so with just one goal in mind: returning home.

“It was a huge decision that I had to make,” Vondran told BSB. “There was nothing really bad about where I was before, and it was kind of a huge leap of faith for me because I was going into the portal knowing that I was only going to pursue one school.”

Home, for Vondran, always meant Ohio State. The rising junior grew up in Columbus and spent much of her life around campus. Her parents both went to and competed at Ohio State, her dad, Chris, as a swimmer in 1990 and 1991, and her mom, Tracy (Endecavageh), as a volleyball player from 1989-1992.

“Since I was 2 years old, Ohio State has always been my dream school to play at,” Vondran said. “Both my parents were athletes at Ohio State, and my mom was a volleyball player. So when I was little I would go to the volleyball games at St. John (Arena) all the time, and I just grew up with the tradition and the OSU pride.”

While Ohio State was always the dream for Vondran growing up, the timing with her recruitment and Ohio State’s program trajectory didn’t quite match up. She didn’t fit with the staff that was in place in Columbus and ultimately decided to look elsewhere.

“When I was starting the recruiting process in high school, I just knew that Ohio State really wasn’t the right school for me at the time,” Vondran said. “It was just back and forth, ‘Do I just want to go to OSU because it’s my dream school?’

“I ended up committing to Dayton my senior year of high school.”

For two years, the decision appeared to be the right one. Vondran played in nine matches as a freshman in 2018, before bursting onto the scene as a setter in  2019, playing 66 sets over 24 games and leading the Flyers in assists (308) and assists per set (4.67). Everything seemed to be going exactly as planned.

“It was pretty amazing,” Vondran said of the 2019 season. “Personally, it was my first year actually playing and being in the moment and I don’t know, I feel like  the hard work that I had put in over the summer and over the fall, and really fighting for a starting spot had kind of paid off in that moment. And back-to-back titles was pretty cool too.

“Honestly with my Dayton team I was really excited to develop more with them in the next couple of years.”

Then, in January, the world turned upside down for Ohio State and for Vondran. The Buckeyes decided to move away from longtime head coach Geoff Carlston after a down season and looked to reconnect to the program’s history with his replacement. On Jan. 17, Ohio State announced that it had hired Jen Flynn  Oldenburg, a newcomer to the college coaching world who had played for the Buckeyes from 1996-1999.

During that four-year span in Columbus, Oldenburg  found her groove as one of the best players in the program, while establishing a friendship with an alum who always seemed to be in the crowd.

“Tracy (Vondran) was always in the stands at our home matches,” Oldenburg told BSB. “She was an alum that stayed in town, and we got to know each other. She was such a big supporter of the program. I got to know her and her husband, Chris, as I was a freshman in college. Having a familiar face in the stands but also  having an alum show that kind of support for the program stood out to me a ton. Then we just developed that relationship into a friendship over the course of the years.

“I’ve known them a long time, and Josie doesn’t remember, but I knew her as a baby and as a little kid. To have the opportunity to coach her now is one that’s  pretty special.”

More than 20 years later, that friendship changed Vondran’s life, as she learned that a longtime family friend would be taking over the dream program that she had chosen to pass on two years prior.

“When I found out that Jen was hired in January, I was having so much trouble falling asleep and staying asleep,” Vondran said. “My mom came to Dayton to take me out to lunch one day and she says, ‘Jo, I think you’re lying to yourself if you haven’t been thinking about this.’

“This was a waking up moment, like, ‘OK, God put one of the best coaches for me in the world in my back yard, because Columbus is home.’ I knew it was a huge risk knowing that I would go into the portal only looking at one school, but I think it was a huge risk that I really had to take,” Vondran said.

For Vondran, the risk paid off. Ohio State got into contact and looked to set up a campus visit, though the sudden spread of pandemic shut that down, forcing the two parties to establish a relationship from afar, through Zoom calls and virtual visits.

“What was a little bit different with her process was the COVID-19 shutdown,” Oldenburg said. “We had scheduled to have her on an official visit prior to  everything closing down and things being delayed, and it just didn’t happen. We had to do a FaceTime tour of campus, and our assistant coach Jill Wilson is actually the one that ran it because I was in Pittsburgh over spring break. I had not come back to Columbus yet.

“So, her process and the official face-toface meetings, unfortunately, did not happen, but our phone calls and Zoom calls are how we finalized her recruitment to Ohio State. It was definitely an interesting way to go about it.”

Even with the natural ties to Ohio State, Vondran’s decision to return to Columbus and transfer to Ohio State was hers alone, which her parents made sure of.

“My parents, them being former athletes and being coaches, they are so good at giving me advice and guiding me through these things but never leading me one way or the other,” Vondran said. “They said, ‘You know, Jo, this is something that you need to trust your gut with, and we will love you no matter what you choose and we will support you, whatever you choose.’ They were just like, ‘Give these things up to God and let him guide you because we’re just the ones that will support you and love you no matter what.’ ”

Still, those ties did play a role, thanks in large part to the familiarity between the Vondran family and Oldenburg.

“My mom being tied to Ohio State as well as my dad, knowing Jen and growing up knowing her made my decision to transfer a little bit easier because I already had familiarity with the coach. I don’t know her very well. My mom obviously knows her more than I do. But my mom never, ever uses her connections or her ties to get me to where I want to go. She thinks it’s really awesome that I’m going to Ohio State, but she doesn’t really want any part of taking credit. My parents don’t take credit for anything that I’m doing.”

“I think what’s cool about them is as much as they could be in her ear about that, I think they also were very respectful of what she wanted to do,” Oldenburg said.
“I think being a Buckeye is something that’s important to her, but it wasn’t her initial step.

“Still, it certainly makes it easier. Tracy and Chris know what Ohio State means and know the resources we have, so I think that was just an easy transition.”

With two years of eligibility remaining, and the ability to transition right into playing time in the upcoming season with no immediate eligibility limitations on women’s volleyball, Vondran’s Buckeye career can start as soon as players are allowed back on campus. With the chance to play for the team she grew up loving, under a coach with such deep ties to the program, the return home couldn’t be any sweeter for Vondran.

“I’ve been an Ohio State fan my entire life, and to finally be on campus and be at Covelli and wear that Ohio State jersey, it gives me chills. I really can’t wait to be
there.”