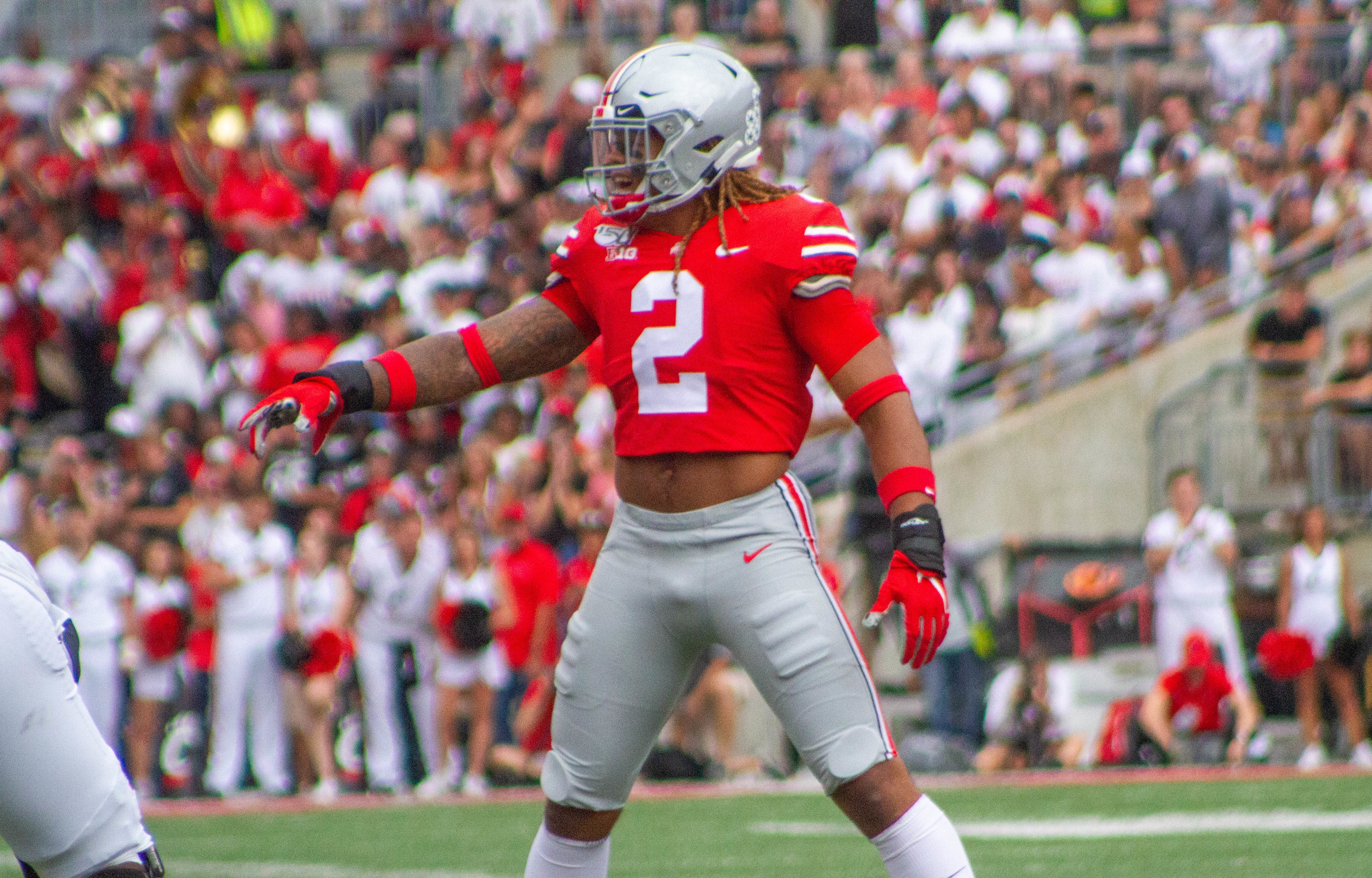 Jincy Dunne, a first-team All-American defender for the women’s hockey team, and Chase Young, a consensus All-American and Heisman Trophy finalist for the football team have been named Ohio State’s male and female athletes of the year for 2020.

The standout Buckeyes earned a spot on the ballots for Big Ten Conference Athlete of the Year awards, which will be announced by the conference June 4.

Dunne led the Buckeyes to their first conference championship, winning the 2020 WCHA Tournament Championship by besting No. 1 Wisconsin in the title game, 1-0, in overtime. Dunne dished the assist on the game-winning goal, which made her Ohio State’s record holder for career postseason points and assists.

“Her hockey IQ is off the charts,” Ohio State head coach Nadine Muzerall said. “She’s holding onto the puck and sometimes people are expecting her to make that pass; and she’s just waiting for that forward or that other defense partner to move into the right space that she sees.

“So she’s very creative, very forward-thinking with her hockey understanding. She also can make fantastic passes, not just the simple pass. She can make the simple ones, but also the elite ones.”

Following the WCHA title, the Scarlet and Gray earned the conference’s automatic bid to the NCAA Tournament and had their eyes set on a national championship, with Minnesota scheduled for the opening round before the COVD-19 pandemic led to the tourney’s cancellation.

With her success not limited to the ice, Dunne won the Big Ten Medal of Honor, making her the first Ohio State women’s hockey player to win that award. The O’Fallon, Mo., native concluded her decorated career as a three-time AHCA All-American, with two first-team selections to her name.

Dunne became just the fourth defensive player in the past decade to be named a first- or second-team All-American thrice. She also earned three first-team All-WCHA nods and won back-to-back conference defensive player of the year honors as a junior and senior.

A natural leader, Dunne was a two-time team captain and two-time alternate captain for the Buckeyes. She became the only Ohio State player to be named first team All-USCHO in 2019 after receiving second- and third-team honors during her junior and sophomore seasons, respectively. The versatile defender finished her career with 99 points, placing her third among Buckeye blueliners on the all-time list.

“The girls really respect her,” Muzerall said. “She has a calm demeanor, but she’s very competitive and she elevates their game because she is always trying to be better. And I think she just has a great moral compass and she has a good heart and she’s team-first mentality.

“So she just has that demeanor in the locker room. She’ll hold you accountable, no questions asked — she’s motherly like that. So she’s very motherly — she’ll love you and take care of you, but she’ll call you out when she needs to as well, like a mom should.”

As an Academic All-Big Ten honoree and WCHA Scholar-Athlete, Dunne earned her bachelor’s degree in psychology in May of 2019. She is enrolled in the sports coaching master’s degree program.

The 2019 Ohio State Male Athlete of the Year, Young, added to his astounding total of individual awards following his dominant junior season. Young won the Big Ten Defensive Linemen of the Year, Defensive Player of the Year and Chicago Tribune Silver Football awards, in addition to three more awards on the national stage.

He won both the Bednarik Award and the Bronko Nagurski Trophy, which both recognize the nation’s outstanding defensive player, and the Ted Hendricks Award for the nation’s top defensive end.

Young led the nation in sacks with 16.5 and sacks per game with 1.38, while finishing second in tackles for loss with 21.5 and TFLs per game with 1.8. He became just the ninth defensive player (out of 159 total finalists since 1982) to be selected as a finalist for the Heisman Trophy, per Ohio State.

Through his three seasons donning scarlet and gray, Young played in 38 games and earned 23 starts. He finished his collegiate career with 31.0 sacks, which marks the second most in program history, behind only Mike Vrabel (36.0 sacks from 1993-96).

Young, who was a team co-captain in 2019, helped guide the Buckeyes to win three consecutive outright Big Ten titles and earn a berth to the College Football Playoff in 2019, where they lost to Clemson.

Young decided to forgo his senior season and enter the 2020 NFL Draft, where he was selected by Washington with the second overall pick..

“His presence matters,” Ohio State head coach Ryan Day said following the Buckeyes’ 56-27 victory over Michigan in ‘The Game.’ “Although sometimes maybe it doesn’t mean he’s getting sacks or TFLs, when two or three guys get the attention of him, that opens up things for other guys.”