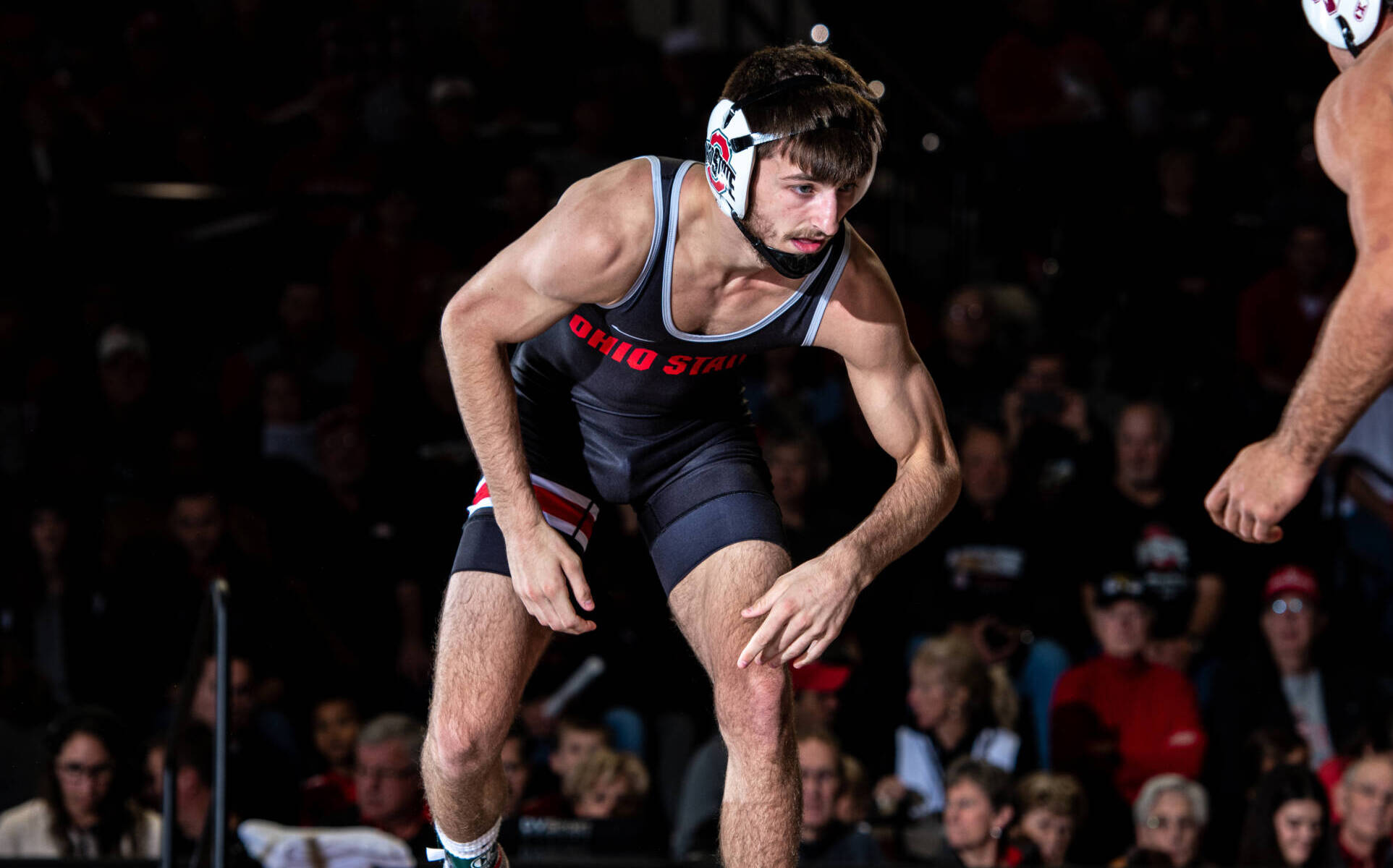 Note: This piece initially ran in the March 21 edition of Buckeye Sports Bulletin.

Quinn Kinner looks natural, just as he always has. He’s smooth on the mat, fluid in his transition and rapidly approaching elite from the top position, which is one of the first things that Ohio State head coach Tom Ryan preaches to his wrestlers. Against Maryland on Jan. 31, Kinner downed Lucas Cordio with a dominant 16-1 tech fall, and he was one of five Buckeye winners against Penn State on Feb. 15, edging out Brady Berge, 4-3.

He couldn’t beat Nebraska’s Peyton Robb in between the two, but the redshirt freshman certainly looked the part of Ohio State’s next contender at 157 pounds, just as he was expected to be. The two-time New Jersey state champion was, after all, a tremendously sought-after recruit who flipped his commitment from N.C. State to Ohio State to be in situations just like these. Just as his classmate Sammy Sasso has done all year at 149 pounds, Kinner looked primed to come into his own at 157.

Above all else the young Buckeye looked comfortable. He claimed two tournament titles in his redshirt freshman season, and the confidence he gained was starting to translate into the duals side of collegiate wrestling, which can in some cases take several years.

When looking at Kinner’s fitness and confidence at 157 pounds, it boggles the mind to consider the 24-pound weight gain that moved him there in the span of approximately two months. On Nov. 17, Kinner wrestled for Ohio State at 133 pounds and lost to Virginia Tech’s Collin Gerardi. Seventy-six days later, he debuted at his new weight, looking more comfortable than ever before.

For a wrestler who entered Ohio State as a 138-pounder then moved to 141 initially before dropping to 133 at the beginning of the season, the journey to 157 has been long and winding. That much fluctuation can create quite a bit of instability if not controlled. That’s where Riley Ross comes in.

Ross serves as the director of wrestling sports science and development for Ohio State, a role he took over prior to the 2018 season.

“I’m a sport science performance coach,” Ross explained. “My job is anything and everything pertaining to these guys performing on the mat and tracking the technology that we employ in order to help these guys just be at their best.”

In layman’s terms, he’s responsible for making sure Ohio State’s wrestlers can do what Kinner has done this season: find a weight that works best for them, in a healthy and efficient way. To do that, Ross – a former wrestler himself – works directly with Ohio State’s coaching staff to determine body type and weight potential to structure a comprehensive plan for each wrestler. Ohio State has an affiliated dietician who puts together food plans so that everything can be tracked down to the calorie.

“We have a dietician that we work with,” Ross said. “But because of my experience as a wrestler previously and because of the sports that I’ve worked with within mixed martial arts and combat sports in general, it allows me to give a little more insight with these guys, a little more anecdotal information.”

Ross’ job with OSU is a year-round battle against complacency.

Because of the nature of college wrestling, Ohio State works around a significant offseason that will see athletes departing from the school for long breaks. In those times, the wrestlers are expected to maintain a body fat percentage range that will allow them to stay within their comfort zone and return to what Ross describes as their set point.

“We ask our athletes to be around a certain (body fat) percentage on a consistent basis, and this summer we’ll have expectations for that to be the same, even though they’re not here. What happens is your body has a set point. And whatever your weight is, if you can stay near it, your body will always come up to that set point. The challenge with these athletes is that they’re 18 to 23 years old. You hit your hormonal optimized profile at like 25. And so some of these guys are growing inches in height. They’re growing inches in girth, so it’s really tough to put them in a set plan.”

So, when Ohio State decides that it wants to shift a wrestler into a new weight class or add some extra power to a wrestler struggling, what actually goes into that process? The first step is to find a baseline to help with decision making for the wrestler in question. As Ross explains, those guides come in the form of three body types.

“I really identify three body types,” Ross said. “They’re called ectomorph, endomorph and mesomorph. We identify as a staff where each one of these athletes sit. Ectomorphs like (sophomore 125 pounder) Malik Heinselman have a hard time putting on weight. A mesomorph like Quinn has an easier time putting on weight, they can lose it and gain it very quickly, and it doesn’t seem to affect them on a massive scale compared to somebody else.”

The final body type, endomorph, refers to someone who gains weight easily but can struggle to lose it.

In Kinner’s case, with that mesomorph body type, the weight changes weren’t actually that taxing physically. He described the weight cut from 141 to 133 as brutal, due in large part to the significant dedication to cardio required for that sort of cut with his natural weight closer to 157. However, because he’s able to change his body makeup easier than, say, Heinselman, the work itself was nowhere near the most difficult part of his weight changes.

Instead, Kinner says that his biggest obstacles in losing weight were mental. He faced severe eating anxiety and fretted over every calorie that he was taking in.

“It’s mentally taxing if you’re trying to lose weight,” Kinner explained. “Making 133 was brutal, even more so mentally than it was physically. Physically, it definitely wasn’t fun. But mentally it was just wearing on me every day. You’re doing the math. ‘I’m going to have to eat this much, lose this much’ and it’s just constantly in your head. And if it’s not going right then, it’s just like everything spirals.

“I always had a problem with eating at all. I know some guys have a problem with eating too much. My big issue was that I didn’t want to eat. I was scared to eat, because I knew I was going to have to lose it. I didn’t know if I was going to be able to. It was just really scary for me. The coaches were always trying to tell me, ‘Eat, and we’ll help you get it off. It won’t be a problem. Just eat, you need food.’ ”

Handling the mental anguish that can come with severe weight changes in a very high-pressure environment isn’t just an unwritten role for Ohio State’s coaches and Ross, either. Wrestlers can’t be at their best if they’re worried about making weight, meaning that the support system around them must be ironclad, and perhaps more than anything else, that’s what Ross is responsible for. He applies his experience as an MMA trainer to Ohio State.

“I came from within the mixed martial arts world, where it’s even more extreme,” Ross said. “I’ve had guys on the cusp of being a contender, and the number one guy in the world gets hurt. And they have an opportunity to fight on a card, and they have three weeks to lose 25 pounds. So I really made it a point for those guys to stay lower, stay where they need to be. But the psychological stress of wrestling is tough enough. There’s probably nothing more stressful, because somebody’s coming at you on a daily basis that wants to physically impose their will on you.”

While Ohio State’s athletes may not be expected to drop 25 pounds in a matter of weeks, Ross has the same approach. He still pushes every day to keep the focus on training rather than numbers on the scale as a way to limit stress and keep focus on what really matters.

The same rules apply to weight gains, which happen quite a bit more frequently at Ohio State – in large part because Ross is not a fan of weight drops unless absolutely necessary. There’s no cut-and-dried, set plan for the weight gain. Instead, Ohio State maintains the approach of leaning into the body type and basing food plans off the work exerted by the wrestler.

“The way that you dictate how the weight gets put on is with the work that you do,” Ross explained. “The lifts that we do, those facilitate a response to gain muscle vs. just putting on weight. [Ohio State football conditioning] Coach Marotti is a master at putting on really solid weight, and you see his body transformation pictures. Those are a really good example of how the work put in dictates what the weight looks like.

“And in the case of Quinn, the work that he did made him eat more. Because if he didn’t, then his muscles, his body wouldn’t have said, ‘Hey, I know I need more protein, I know I need to be doing these things.’ He knew he had to eat, just because the work made him hungry. Because your body is looking for those nutrients in order to make that happen.”

When losing or gaining weight, the battle for Ohio State’s wrestlers and coaching staff remains the same. With real competition always around the corner, the focus must be on training, rather than raw numbers.

“These guys shouldn’t be wrestling against the scale on a consistent basis,” Ross said. “The battle is with somebody else.”