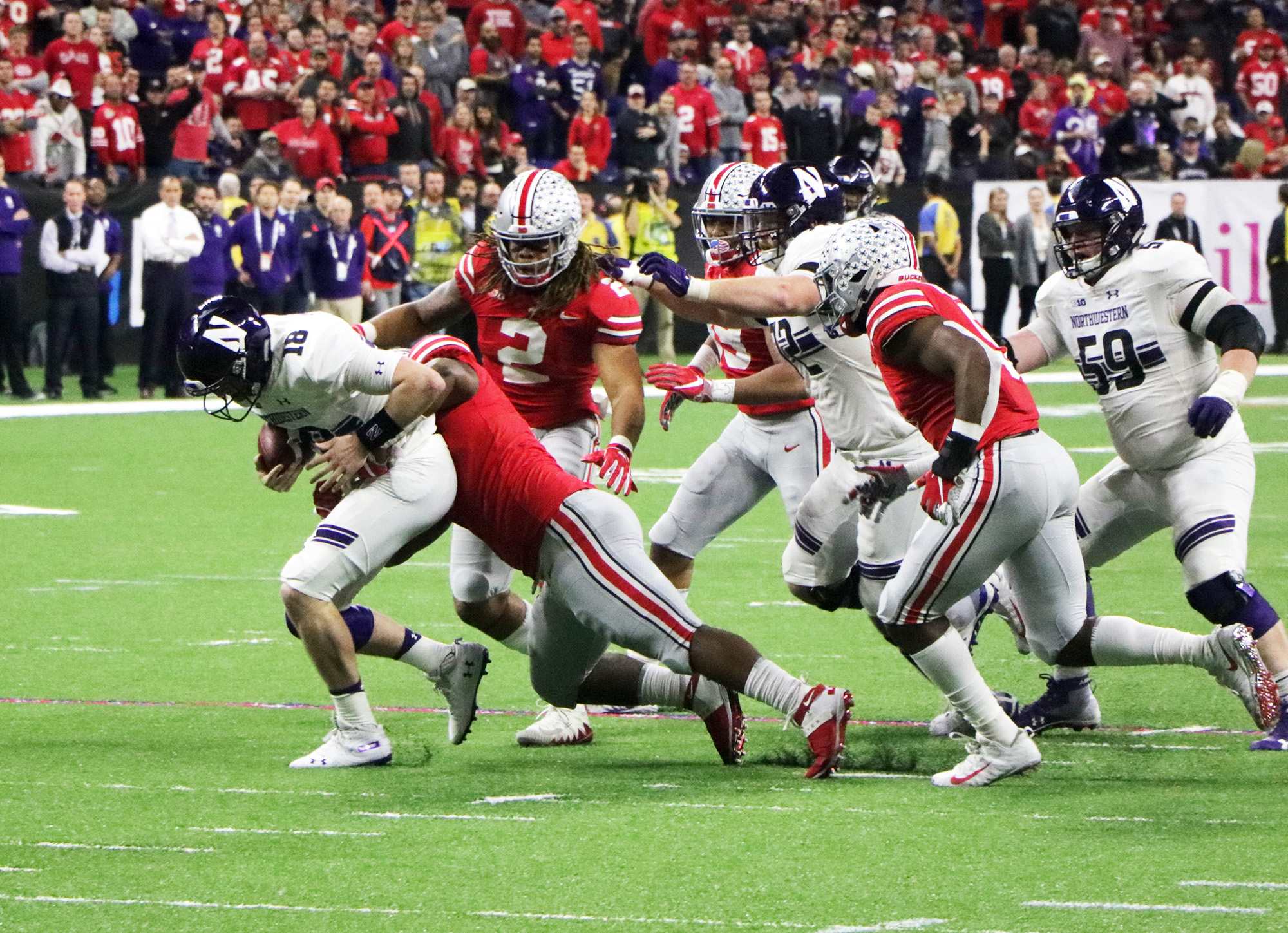 INDIANAPOLIS — How did Ohio State arrive at its 45-24 win over Northwestern in the Big Ten Championship Game? BSB takes a deeper look in Game Analysis.

The Ohio State passing attack. Sophomore quarterback Dwayne Haskins picked apart the Northwestern secondary, connecting on a wide variety passes – many of them in clutch moments. The signal caller drove the Buckeyes 77 yards on their opening drive, capped by a 16-yard touchdown to fifth-year senior Terry McLaurin on third-and-11. After a regrettable interception in the second quarter, Haskins regrouped and led Ohio State on a 78-yard drive, culminating in a pristine 42-yard touchdown pass to McLaurin on third-and-20.

The quarterback from Potomac, Md., struck again in the third quarter with the Scarlet and Gray leading 24-21, finding Chris Olave for a 29-yard touchdown. The sophomore gunslinger was not done yet, completing a 63-yard bomb to Johnnie Dixon and then connecting with Dixon on a 9-yard touchdown. Haskins finished his record-setting game with a 17-yard touchdown pass to J.K. Dobbins, giving him 499 yards on 34-of-41 passing with five touchdowns and one interception. The yardage total broke his own single-game program record of 470, which he set in a loss at Purdue earlier this year.

Discipline. Typically, in a championship game, it is pivotal to limit penalties and take care of the football. The Buckeyes failed to do either of those two tasks, but were fortunate to escape with a victory.

The Buckeyes committed nine penalties for 90 yards, which both mark the most by a team in the eight-year history of the Big Ten championship game. Turnovers often change the course of a game and Ohio State is fortunate Northwestern did not capitalize off its mishaps. Driving down the field early in the second quarter with a 14-7 lead, Haskins threw an ill-advised pass downfield from the NU 40 on first-and-10. Montre Hartrage picked off Haskins’ pass at the NU 16. However, the Wildcats gave the ball away themselves via a Clayton Thorson fumble.

Then, in a 24-21 game, Ohio State gained possession in Northwestern territory via interception, but Mike Weber coughed up the football at the NU 19. Fortunately for the Buckeyes, Northwestern went three-and-out, and what could have been the most-costly miscue of the game ended up as a unfortunate blemish in a big win.

With Ohio State holding a narrow, 24-21 lead against Northwestern with the Big Ten championship on the line, an unlikely hero stepped up for Ohio State. The Wildcats had scored on their first two drives to start the second half, including completions of 16, 17 and 17 yards against Buckeye cornerback Damon Arnette.

Offensively, the Buckeyes failed to convert a first down on either of their first two drives to open the third quarter, and Northwestern regained possession down just three. With Thorson finding his groove, the Wildcats started on their own 30-yard line. Thorson dropped back to pass on second-and-8 and his throw was deflected at the line of scrimmage, apparently off his own lineman, as he attempted to throw under pressure from sophomore defensive end Chase Young. The ball ricocheted in the air and Arnette leaped up and snagged it. Although the interception was not directly turned into points, Ohio State never looked back, outscoring Northwestern 21-3 to close out the game.