Four Things We Learned About The Buckeyes’ RB Room This Week 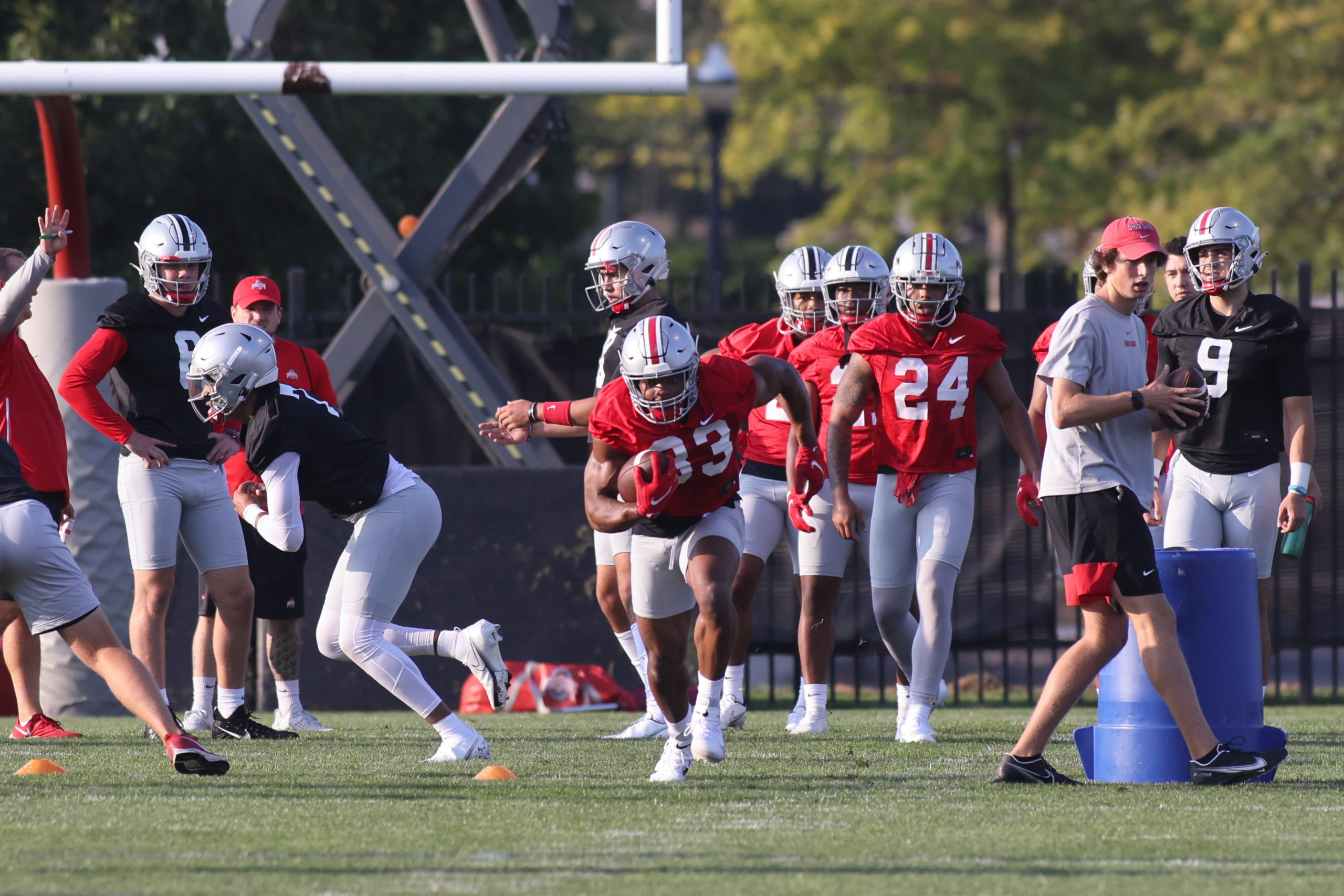 The countdown clock is ticking down ever-closer to Sept. 2, but the Ohio State offense still has plenty to sort out before taking the field for its season opener at Minnesota.

One such uncertainty is how exactly the running back rotation will look in the absence of Trey Sermon, with a whole lot of emerging talent competing for carries in 2021.

Ohio State running backs coach Tony Alford and a host of his brightest pupils spoke with the media on Wednesday though, and we’ve parsed the information to bring you four things we learned about the talented unit this past week.

Buckeye freshman running back TreVeyon Henderson has continued to make waves in practice and appears to be right in the mix to see significant carries for the Buckeyes when the season begins.

Alford said Henderson has shown off a few “wild moments” in drills and scrimmages, in regards to his ability to make highlight plays, and raved about the Virginia native’s natural qualities this past week.

“He’s got some innate stuff about him,” Alford said. I’d like to say I coach it all, but I can’t.”

Henderson said he has “big expectations” for himself this season, although he isn’t divulging exactly what his goals are, and said he wants the chance to make an immediate impact for Ohio State, even if Alford doesn’t know quite yet exactly what the rotation will look like on Sept. 2 and beyond.

Teague working on not being “one-dimensional”

Master Teague turned in a solid redshirt sophomore season in 2020, tallying more than 500 rushing yards and leading the team with eight touchdowns on the ground, but the fourth-year Buckeye knows he must improve in some areas if he is to take his game to the next level.

“Not being so –– my eyes –– one-dimensional to one side,” Teague said this past week. “There were some times where I missed some cuts on the back side this past year. Just got to make sure my eyes are in the right place and reading the D-line right. I’ve just gotten really better with that on certain runs.”

Agility has been a point of emphasis for the Tennessee native for the past two offseasons now, but after spending much of the 2020 offseason rehabbing an Achilles injury, Teague said this has been his healthiest summer in recent memory.

Teague is the incumbent starter, but even with Trey Sermon gone in 2021, it’s not as if he doesn’t have a considerable amount of competition breathing down his neck to push him for that job ahead of the new season.

Four-star class of 2019 running back Marcus Crowley flashed as a true freshman, averaging almost 10 yards per carry across appearances in seven games for the Buckeyes two seasons ago.

However, that momentum has abruptly stopped in its tracks by a torn ACL suffered late in the regular season against Maryland. As a result, it took Crowley nearly the entire 2020 season to get back to a point at which he could take snaps out of the backfield, getting his first carries in the national championship game against Alabama.

With another offseason under his belt though, Crowley looks no worse for wear on the previously injured knee, according to Alford.

The compact frame possessed by 5-foot-8 Miyan Williams is a calling card for the redshirt freshman, who has earned fan-favorite status and nicknames like “Meatball” and “Porkchop” due in part to his stature.

However, the Cincinnati native said he has actually dropped 10 pounds this offseason to gain “a lot more speed and wiggle,” and now weighs around 223 pounds.

“Just changing my diet really, that helped me a lot,” Williams said. “Changing my diet, eating the right stuff and just working out a lot too. I’m actually 10 pounds lighter.”

Williams said he feels looser on the football field after cutting red meat from his diet altogether, and the changes appear to be aiding his cause in the preseason.

The second-year Buckeye has received plenty of first-team reps at running back during fall camp, but where exactly Williams will fall in the running back rotation remains more or less anyone’s guess at this stage.