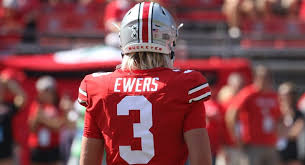 Former five-star Ohio State quarterback Quinn Ewers, who played only two snaps in his one season with the Buckeyes, is heading home. The Southlake (Texas) Carroll product announced Sunday night that he’ll be using his free transfer to jump to Texas, joining forces with head coach Steve Sarkisian likely as an immediate starter in Austin.

“The allure for Ewers to go to Austin is Sarkisian’s extensive history developing quarterbacks,” Thamel wrote. “That includes helping get Alabama’s Mac Jones NFL ready during a record-breaking 2020 season and coaching quarterbacks in the NFL.”

Texas originally finished second in the Ewers sweepstakes during his recruitment and attempted to make a second run at him when it hired Sarkisian, but at the time, Ewers turned those pursuits away. Now, with C.J. Stroud entrenched at Ohio State, he’s headed home.