Fleming, Harrison Jr. and Egbuka Have New-Found Opportunity In The Rose Bowl 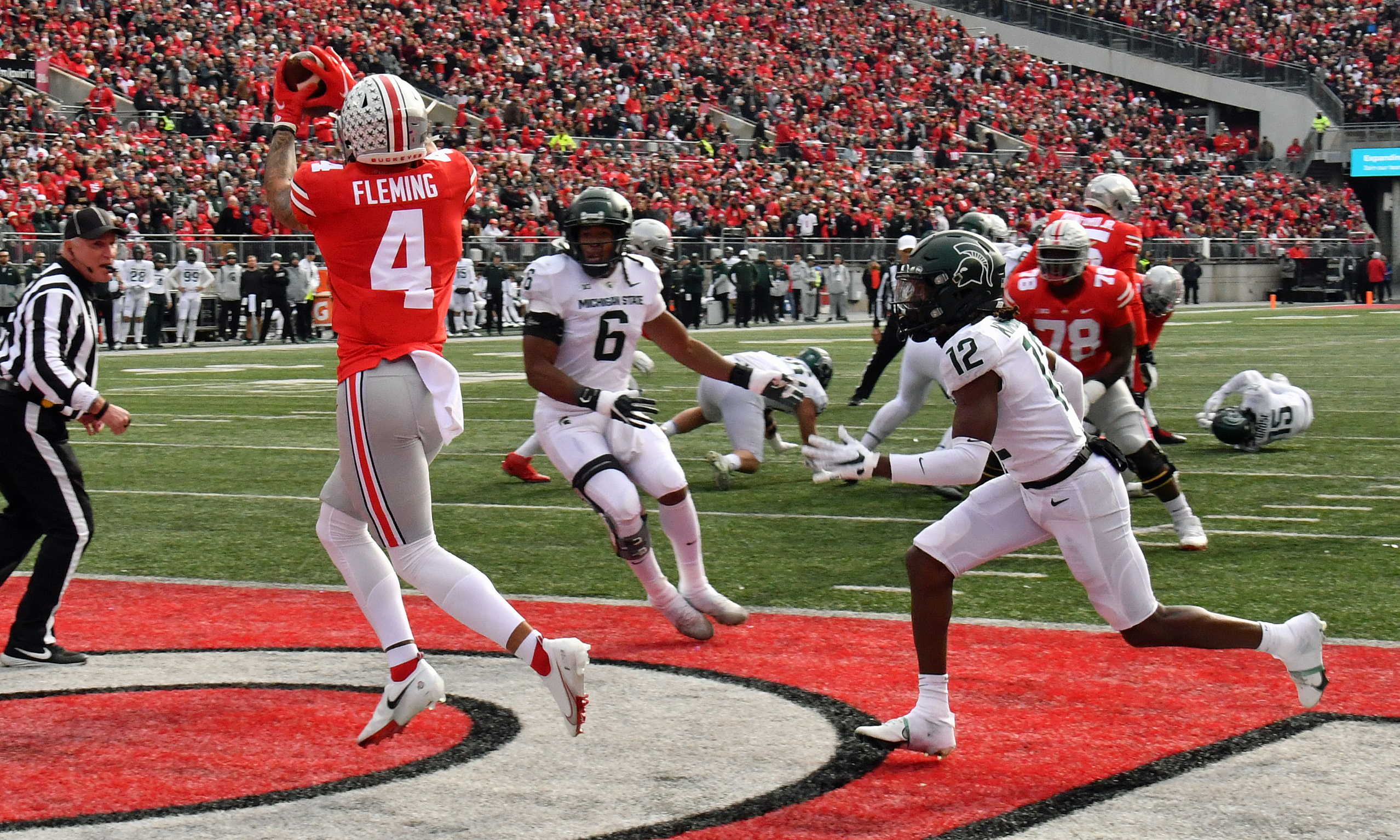 Ohio State fans should familiarize themselves with these names before the Buckeyes face Utah in the Rose Bowl: Julian Fleming, Marvin Harrison Jr. and Emeka Egbuka.

Wide receivers Chris Olave and Garrett Wilson announced on Monday that they will forgo their final opportunity to wear the Scarlet and Gray as they prepare for the 2022 NFL Draft. Both players are expected to be first-round selections.

Jaxon Smith-Njigba will still be available along with his team-leading 80 receptions and 1,259 receiving yards. Still, the Buckeyes will need to replace Olave and Wilson’s contributions with the trio of Fleming, Egbuka and Harrison Jr. as the future of the Ohio State receiver room begins to form.

“These guys have been waiting for this opportunity,” Smith-Njigba said on Monday. “I know they’re excited to step in that role, and I’m just happy for Chris and Garrett for taking that next step. The receiver room, we want to make them proud and ball out for them, so it’s gonna be fun.”

Fleming will likely take over the “Y” position vacated by Olave. The 2020 Catawissa (Pa.) Southern Columbia five-star and No. 1 receiver started for Wilson in a victory over Nebraska when the latter missed the contest with a concussion. Fleming has seven receptions for 51 yards and a touchdown in seven games for Ohio State this season. Since coming to Columbus, he’s battled through multiple injuries and will look to have a proper breakout performance on a national stage.

Harrison Jr. looks poised to replace Wilson at the “X” position. He consistently stood out during spring practices and continued to flash throughout the summer and fall. Harrison Jr. trails only Olave, Wilson and Smith-Njigba with 192 snaps at wide receiver and tallied five catches for 68 yards in 12 games.

The true freshman and former Philadephia St. Joseph’s Prep four-star recruit showed glimpses of strength and athleticism on special teams this season, which could translate to an impactful performance for Ohio State when it takes the field against Utah.

Egbuka’s direct impact came on special teams this season as he returned 13 kicks for 417 yards (32.1-yard average) in 10 games. However, the 2021 Steilacoom (Wash.) five-star and No. 1 receiver added six catches for 145 yards at wide receiver, including a screen pass he took 85 yards against Akron in Week 4. He will likely contribute behind Smith-Njigba in the slot but could see snaps on the outside against Utah.

“Certainly, Jaxon has had an unbelievable year. We need Jeremy Ruckert to step up,” Day said on Monday. “And then also on the outside, now you have Julian, you have Marvin, Emeka (Egbuka) and some of those younger guys that now are gonna have an opportunity to play.”

Ohio State quarterback C.J. Stroud feels confident in Ruckert’s consistency, and he is looking forward to seeing the younger receivers step up and make plays against the Utes.

“You’re gonna see explosive offense and those guys making plays,” Stroud said on Monday. “Marvin and Julian are gonna step up, and they’re gonna play real hard and they’re gonna make plays. It’s nothing new to them. They’ve been doing it since they were kids. So I don’t expect anything different.”

Whoever replaces Olave and Wilson will have large shoes to fill. The pair combined for 135 catches, 1,994 yards and 25 touchdowns in 2021 and set a standard that will be difficult to reach. Olave, the program’s all-time leader in receiving touchdowns, continued to practice with the Buckeyes throughout the bowl season and made the trip to Pasadena, Calif., with the team.

“He’s been practicing with the team the whole bowl practices. He came over with us, and he practiced today,” Day said. “He came back for a reason. Nothing but an unbelievable amount of respect for Chris and what he’s done here and everything he’s done for this program. He still wanted to be part of the team and everything like that.”

While not to diminish the importance of the Rose Bowl, the postseason competition will effectively serve as a 2022 preseason matchup for the Ohio State passing attack as Stroud develops a rapport with Fleming, Harrison Jr. and Egbuka, establishing chemistry that will carry over into the next season.

“The younger guys, they want an opportunity to go get some momentum going into next year,” Day said. “We still have a bunch of guys that still want to play well in this game.”