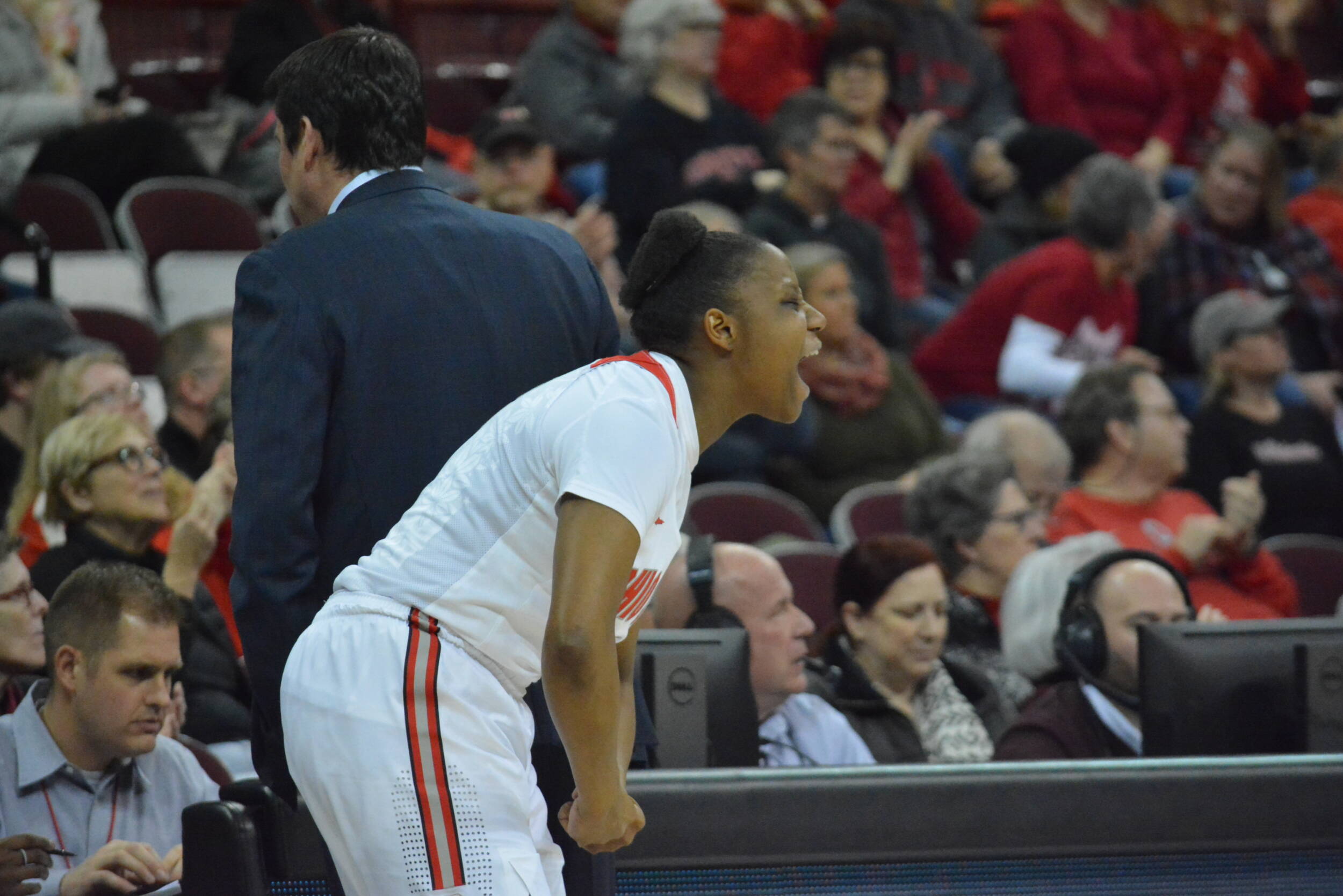 Heading into the month of February, Ohio State women’s basketball was not in an ideal spot.

At 11-9 and 4-5 in the Big Ten, the Buckeyes were as on the bubble for the NCAA Tournament as they could have been, and did not help their chances following an 85-65 home loss to Maryland to end the first month of 2020.

But to open February, Ohio State had a chance to redeem itself on the road against a Nebraska team that was also very much on the bubble at 14-7.

For the first 20 minutes, it looked like Ohio State’s season was making its official turn for the worse. Nebraska led 49-34 at halftime, threatening to give the Buckeyes a three-game losing streak and dropping them way out of the tournament picture.

Ohio State was not ready to give up that easily, however.

“I knew we did not want to give up in that game,” junior guard Braxtin Miller said. “I think you could just see it in everybody’s eyes.”

Unwilling to lose a pivotal game this late in the season, the Buckeyes outscored Nebraska 34-19 in the final two quarters to force overtime, then won the extra frame 12-6 to secure an 80-74 victory.

“We’ve grown a lot and it’s clear to see,” Miller said. “I think if we were to be down by this much maybe a month ago, maybe we would have given up, but I think that in a lot of games we’re kind of figuring out how to keep persevering and we’re not trying to lose.”

Miller played the hero against Nebraska, scoring a team-high 17 points, including a three late in overtime to put Ohio State up four and officially ice the game. But don’t try telling the Oklahoma State transfer that she was the player that made the winning streak happen.

“Well, I didn’t spark the winning streak with that shot,” Miller said with a smile. “We did that as a team, it felt really good to be able to hit that down and be there, like that was one game that I had to be there and pick the team up when they needed me.”

Either way, Ohio State beat Nebraska and then proceeded to play its best basketball on the way to beating four other teams, two of them being on the road, and one of them being ranked.

“It was really big. I feel like it built our confidence a little bit and just showed that we can really come back,” freshman guard Madison Greene said on the Feb. 2 Nebraska win. “I feel like it’s proven that we can come back in big situations.”

On Wednesday, the Buckeyes are hoping to extend the win streak to six games against the same team they started it with. The Cornhuskers, including the loss to Ohio State, have lost four of their past five games, and have fallen out of the NCAA tournament picture in a way the Buckeyes threatened to do if they did not come back to win in overtime in Lincoln.

“It was such an odd game in that we played really well in stretches and really bad in stretches,” Ohio State head coach Kevin McGuff said on the previous matchup against Nebraska. “We played really well down the stretch and kind of, we showed a lot of togetherness and toughness to come away with the win, and then we’ve kind of carried that over to the subsequent games after that.”

There have been plenty of categories in which Ohio State has improved during the five-game win streak, especially on the offensive end, where the Buckeyes, who average 72.5 points per game on the season, has scored at least 78 points in all five games, including a 99-point outing against Minnesota.

But Miller said a lot of what has built this strong play has come from a change in attitude.

“We’ve really come together and just, not that we didn’t realize how good we could be, we already knew that, but just even realizing that when we do get down and when things aren’t going our way, the game’s not over, we’re 100 percent fine,” Miller said. “We have so much talent and so many players that can spark things and get the game going that it’s not over. So that’s just been a really big thing for us.”

Ohio State was staring down a much different postseason outlook with 20 minutes to go against Nebraska on Feb. 2. But that 15-point rally, and the ensuing winning streak, moved the Buckeyes from outside the NCAA tournament bubble to a team currently fighting for a top-eight seed in the tourney.