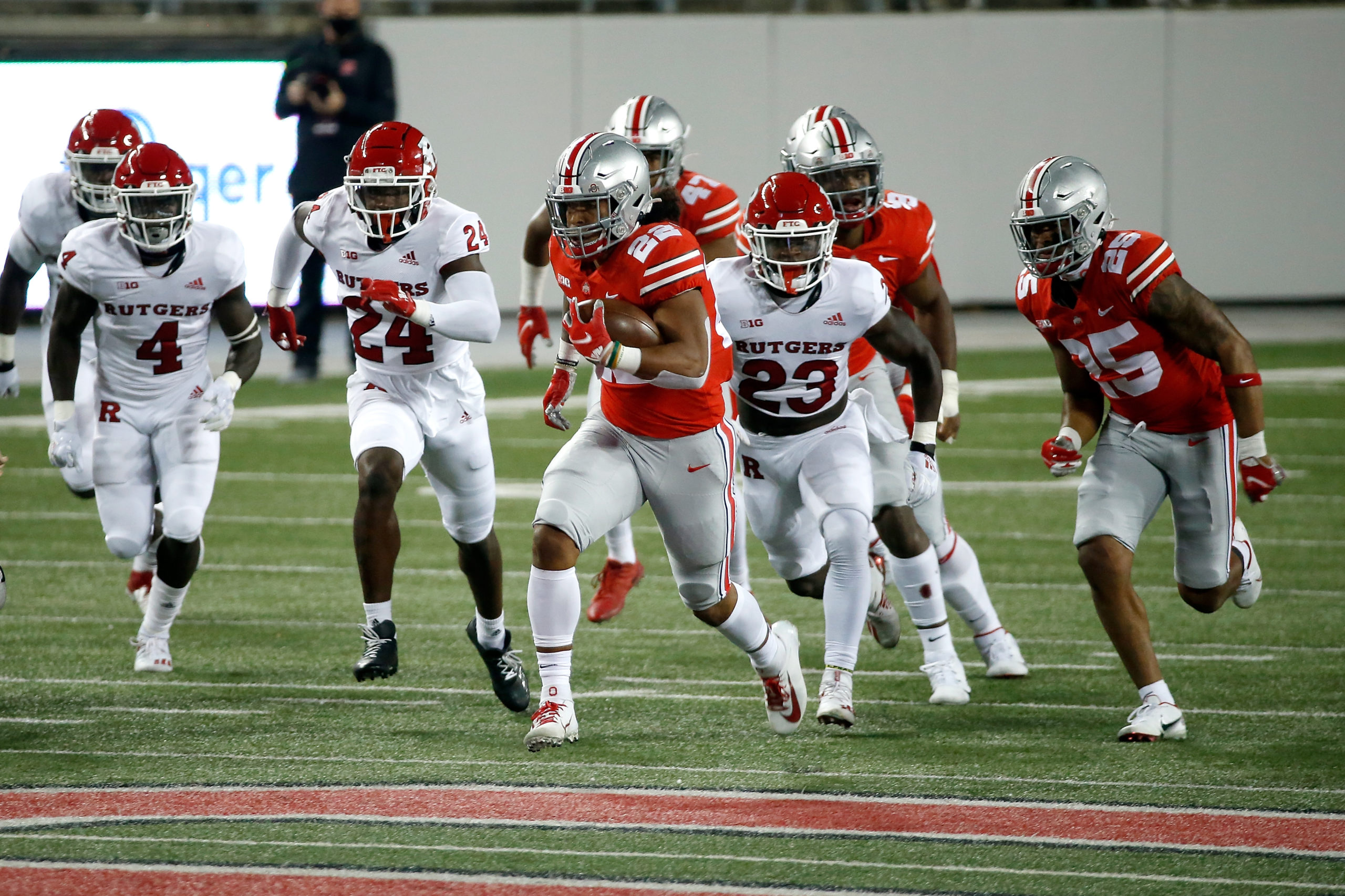 When factoring out the three longest runs of Ohio State’s 49-27 victory over Rutgers on Saturday night and isolate Master Teague, Trey Sermon and Steele Chambers, you’re left with a pretty grim indicator of where the Buckeye rushing attack is right now. With those parameters, Ohio State rushed 25 times for 75 yards, exactly three yards per carry.

Obviously, you can’t remove those big runs and still find a fair assessment, because those runs did happen and explosiveness is a valuable part of any good offense, but you can take that out to illustrate just how inefficient these top three halfbacks have been on the vast majority of the season so far. Through three games, this OSU rushing attack has ranged from average to very bad. After an average performance against Penn State, it put up maybe the worst showing of the three on Saturday.

So, the easy question and the question that seems to be on everyone’s minds right now is simply: what’s causing this? Is it a personnel issue? Scheme? Blocking?

To say that it’s a little of all three is a cop-out, and it seems to also be pretty blatantly untrue. This is a personnel problem.

Specifically, Teague and Sermon don’t fit what Ohio State is doing, defenses are recognizing it and this is only going to get worse for the Buckeyes if they don’t make some sort of change. That doesn’t necessarily mean benching either player, nor does it mean wildly changing the scheme, but staying right where it has been through three weeks and doubling down serves only to make easier the jobs of opposing defensive coordinators.

The main fit issue is that Ohio State is trying to use a zone running scheme – predicated heavily on timing and using a running back that can find and hit holes quickly – with running backs that cannot find and hit holes quickly. Sermon and Teague are, frankly, slow out of the backfield and require quite a bit of time to get up to full speed. That’s acceptable for a power running game, but that’s not what Ohio State has here.

This play is an excellent example. Ohio State loads up the line away from the boundary here in hopes of clearing out the defense and creating easier blocks on the play side for Nicholas Petit-Frere and Wyatt Davis, while the back side of the line is hoping to seal off both defensive tackles and the back side end, while clearing out at least two second-level players.

All of that goes according to plan. The seal is good, the second-level blocking is good and even the set up from Petit-Frere and Davis is good. Davis seals off that defensive end with a fantastic block and Petit-Frere manages to kick the outside linebacker out, creating a clear cutback lane for Sermon, with a lead blocker in Mitch Rossi still upright and no backside linebackers to worry about.

But Sermon can’t make the cutback. He just isn’t quick enough to do it. His cut is slow, so he’s caught by the safety before he can jump back inside into that wide open lane. The blocking is there, the running just isn’t.

Similar idea here. Blocking is great, Sermon is just a step slow and he gets caught because of it. There’s not much more that you can ask from an offensive line in a spot like this, the running back just isn’t getting down the field quickly enough.

Now, this obviously isn’t the only thing that’s ever going wrong for this running game. There are missed blocks on occasion, as well as strange play calls, like this inside run on a third-and-long against a six-man box with just five blockers. This is a baffling choice.

But that’s not happening very frequently, and a college running game cannot require perfect blocking and play calling on every single down to be competent. That’s asking far too much of the line and far too little of the running backs behind it. Ohio State can’t build a good running game if its halfbacks need a wide open lane on every single play, that’s just not realistic.

So, what is the fix here? A patchwork solution and one that would likely work pretty well right away would simply be to remove the training wheels from Justin Fields and allow him to work as a runner off of read option looks.

Adding Fields to the running game consistently does a couple of things. Firstly, it forces the defense to cover an extra player, which is going to give the offense one less defender to worry about on every single running back with a quarterback keep tag attached. The defensive ends can’t collapse in if there’s a threat of a quarterback run which then in turn gives the offensive line a numbers advantage, taking some of the pressure off to be perfect in blocking on every play.

It’s the same idea of using motion as misdirection to shift linebackers around: it changes the defense’s numbers, even if it’s just a slight change, to create easier blocks for the line. When you do both, as Ohio State does here, it gives the seven Buckeye blockers just five box defenders to worry about, because the outside linebacker is slipping out to handle the motion and the play side end is isolated and left unblocked for Fields to read.

Of course, the issue with this approach is inherent: Fields is pretty important to what Ohio State is doing and putting him at risk to improve the running game is a very very risky bet, especially with the offense still finding the end zone consistently without a good running attack. One bad shot to the ribs and Ohio State suddenly has two very significant issues on its offense, rather than one that likely qualifies as “concerning” at this point.

The other option is in a true personnel change, shifting either to Chambers or another back as the full-time starter, in hopes that they better suit the system around them.

Chambers seems to be the popular choice after a strong performance against Nebraska and his big run on a fake punt in the second quarter against Rutgers, but in all honesty, he doesn’t seem to be all that different from the two players ahead of him. He’s a better athlete, certainly, but he frequently looks for contact instead of open space and seems to have very little interest in the kind of explosive, quick-cut running that J.K. Dobbins brought to the table in 2019.

Additionally, he fumbled late against Rutgers. Ohio State isn’t going to put him on the field consistently until he’s fumble-free several games in a row.

Without a healthy Marcus Crowley, that leaves either Miyan Williams or Demario McCall if Ohio State wants to go the personnel change route. Williams isn’t there yet. McCall is.

On his two touches against the Scarlet Knights, McCall rushed for 12 yards and caught a pass for another 27, darting through the defense after motioning out of the backfield and making the linebacker that drew him in man coverage look pretty silly in the process. While not serving as a running back here, McCall flashed a willingness to run away from defenders that his teammates seem to lack, and contrary to common belief, he did not immediately split in half or fumble the ball upon contact, even as he took a big shot down the field. He bulked up this offseason and frankly, he looks like a running back in open space. A good one. The kind Ohio State currently lacks.

On his one carry, he showed off a similar style, finding space on the outside and getting into the lane quickly. More notable here than anything else: he also did it without a single lineman blocking for him directly. Ohio State is running a power read, with the line blocking to the field, in case Fields reads the isolated end staying in place and decides to keep the ball for an inside run.

That means that when McCall does get the handoff, he’s running to a sparsely manned side of the defense, but he’s doing so without requiring every offensive lineman to put up a perfect rep in front of him. He’s comfortable running into space on the outside and Ohio State seems comfortable letting him do that, much more so than it is with Teague or Sermon.

So why not just do this? McCall isn’t seeing playing time elsewhere, so it isn’t as though Ohio State would be pulling him away from a spot he’s already producing at. He seems to be up to the task physically, and he’s never actually fumbled as a running back or at all, struggling instead with muffed punts and kick returns, neither of which he would have to deal with at running back.

On top of that, he seems to be a significantly better fit for the offense. He’s much quicker than any of the other options and has shown frequently that he can find space in a defense, while also serving as a strong receiving threat out of the backfield, which would only serve to make like easier on Fields. So why not? It isn’t like Ohio State is trading efficiency for explosiveness here, as the current options aren’t excelling at much of anything. What’s the harm in testing McCall out at halfback against Maryland, just to see how he works in the offense?